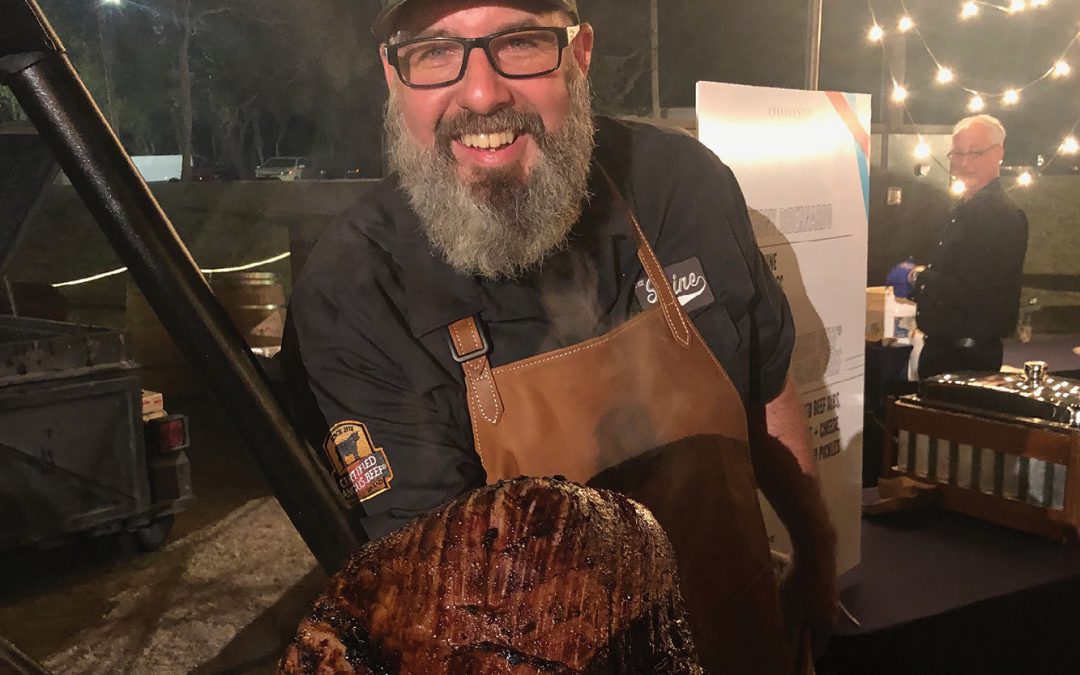 The 14th installment of the Charleston Wine + Food Festival (CWFF) was held last month for five days, welcoming more than 400 chefs and industry professionals from around the country and offering more than 100 events for hungry festival goers.

As West Ashley continues to evolve as a community, so does our culinary scene. And this year’s CWFF had a much stronger West Ashley presence than years past. For one, West Ashley resident and Swig & Swine pitmaster and owner Anthony DiBernardo sits on the board of directors for CWFF and serves as the festival’s Chef Co-Chair.

“The biggest highlight of every festival for me, this one included, is getting to welcome some of these chefs to town. I was able to extended some Charleston hospitality to every chef that I hosted over the weekend,” says DiBernardo.

In addition to serving on the board and helping visiting chefs, DiBernardo also participated in several events, including demonstrations at the Culinary Village and the Southern Renaissance event, which were both held downtown. He also helped grill Today Show host Natalie Morales’ flank steak as part of the Smokin’ in the Boys’ Room event that was held at The Bend, located on the banks of the Ashley River. The event was held on International Women’s Day and highlighted female chefs grilling and smoking food. Morales and other Today Show cohorts were in town because of the festival and the dish that DiBernardo prepared was her recipe for Chimichurri Soy Steak from her cookbook At Home with Natalie Morales.

“She was great. She wanted to try our short rib and liked our pimento cheese and pork rinds. It was a pleasure to work with her,” said DiBernardo, who in addition to preparing Morales’ flank steak, he and his Swig & Swine crew also offered a dish of their own that was a Certified Angus Beef chuck short rib.

At Smokin’ In The Boys’ Room DiBernardo and his team cooked on a Cowboy caldron, which is literally a large tripod that suspends a giant caldron that you can fill with firewood and then has a grill grate across the top. But for the Southern Renaissance event he helped chef Martha Wiggins from The Elysian Bar in New Orleans use the Cowboy Caldron literally as a caldron where she made coconut red beans. DiBernardo said it was the best thing he had at the entire festival. “Those red beans were ridiculous,” he says. “It was kind of island meet southern. we paired it with my pork belly and crumbled some pork rinds for texture.” 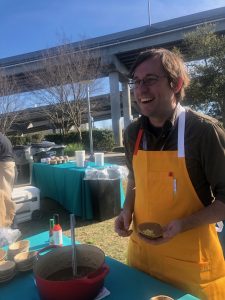 In addition to DiBernardo, other West Ashley chefs included Chris Stewart, owner of The Glass Onion on Savannah Highway. Stewart, an eighth generation Alabama native, knows a thing or two about true homegrown southern cooking. Although he credits most of his cooking knowledge to his grandmother, who owned a restaurant in  Birmingham, Stewart is making his own mark on the Charleston culinary world. At the It’s A Shore Thing event, while most folks were offering up unique takes shrimp cocktails, smoked fish, and oysters on a half shell, Stewart went against the stream with his dish. His delicious Braised Turtle Okra Stew was one of the highlights in an event full of highlights and certainly one of the most original.

Stewart also participated in Corkscrews + Campfires, one of the most sought after tickets of the whole festival. The bonfire/camping-themed event, which featured nearly 40 chefs and top-notchwinemakers, was held right here in West Ashley at Old Towne Creek County Park, located off of Old Towne Road near Charles Towne Landing.

Other West Ashley events included RetrEAT, held at The Schoolhouse on Magnolia Road, which focused on health-centric food, beverages, and an interactive approach to wellness.

Overall, the 2019 CWFF was a tasty stew of talented chefs, perfect weather, and plenty of wine to wash it all down. “In my opinion, this year was one of the best years ever. Just the talent level alone was phenomenal,” says DiBernardo, whose term as CWFF Chef Chair is technically up after this year. “I don’t want to leave, so I might see if I can stay on a little longer.”