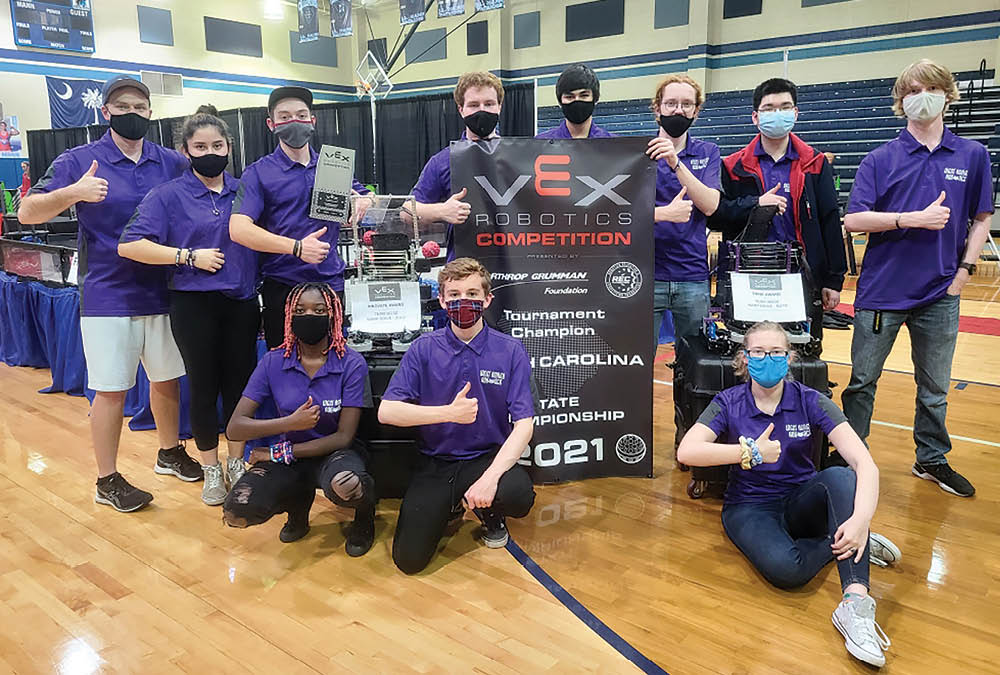 West Ashley High School’s robotics team, 9623Z – Zulu, competed at the VEX Robotics Competition (VRC) High School State Championship this past weekend in Greenville, SC, and came away as the 2021 Tournament Champions. The victory secured West Ashley’s spot in the World Championship in May.

“I always set the expectation for my teams to qualify for the state championship,” said West Ashley Robotics Coach Nicholas Holmes. “Nationals and Worlds are different but State is kind of mandatory here at West Ashley Robotics. The last time we won was in 2016 and this time felt about the same as that, amazing! We work so hard all year to get to this point and we have had it slip through our fingers a few times. It was also special because the team that won in 2016 came to cheer on our teams this year. It was nice to have everyone there.”

Team 9623Z includes seniors Oriana Perez and James Thorne, junior Brandon Gillner, and sophomores Karl Brenkert and Syniah Brown. The team also received the Innovate Award, which goes to the team whose unique The team also engineering element demonstrates a group that thinks outside the box.

West Ashley High robotics team 9623X – BotX also participated in the state competition and finished in ninth place. The team consisted of seniors Gavin Wilgus and Khue Nguyen, juniors Emily Taylor and Sullivan Markland, and sophomore Charlie Stavros. Nguyen’s coding skills helped them receive the Think Award which is given to a team with impressive and effective autonomous programming.

Gillner relates being a part of the robotics team to joining a sports team or another group where everyone matters and it takes the collective team to get things done well.

“It’s a sense of duty to perform and be the best and produce the best robots and win,” said Gillner. “My favorite part of being on the robotics team is when the countless hours after school that are put in around friends pay off, and you are able to say that you got to the place you are because of your whole team.”

This year, robotics teams competed against each other in a game called “Change Up.” Teams form an alliance made up of two robots that work together in a timed challenge to put 32 balls in the nine goals located around the field. One goal equals one point. However, if teams create a connected row of goals in any direction (horizontally, vertically, diagonally), that team receives six bonus points.

Part of this year’s learning curve dealt with training themselves how to function in a COVID-19 world. Typically, the West Ashley Robotics Team consists of roughly 36 students building six robots, but due to current restrictions, the team is down to ten students and two robots. Despite a virtual start to the season, there were a few advantages. The team was able to compete with groups from all over the world without ever leaving their classroom.

Team members accepted the changes considering they initially thought they wouldn’t compete after the shortened 2019–2020 season. They received the go- ahead to compete after implementing new safety precautions and other COVID- related safety measures.

“Mr. Holmes went above and beyond to ensure we have a season but that meant we would have to implement new restrictions,” said Perez. “It also meant making the team would be hard and that we had to work harder than ever before due to our season starting two months later than normal. We were determined to do well and make it the best we possibly could.”

The students agreed the greatest part of this season has been watching their hard work pay off.

“When I heard we won, I was in disbelief,” said Brenkert. “But I also felt an overwhelming sense of relief and accomplishment. I was incredibly excited that everything that we’d gone through all year paid off. It was a once-in-a-lifetime experience that I’ll never forget! It taught me that hard work does pay off.”

Team 9623Z will represent West Ashley High at the World Championship from May 17-22. The event was originally scheduled to be in Dallas, TX but will now be run virtually.