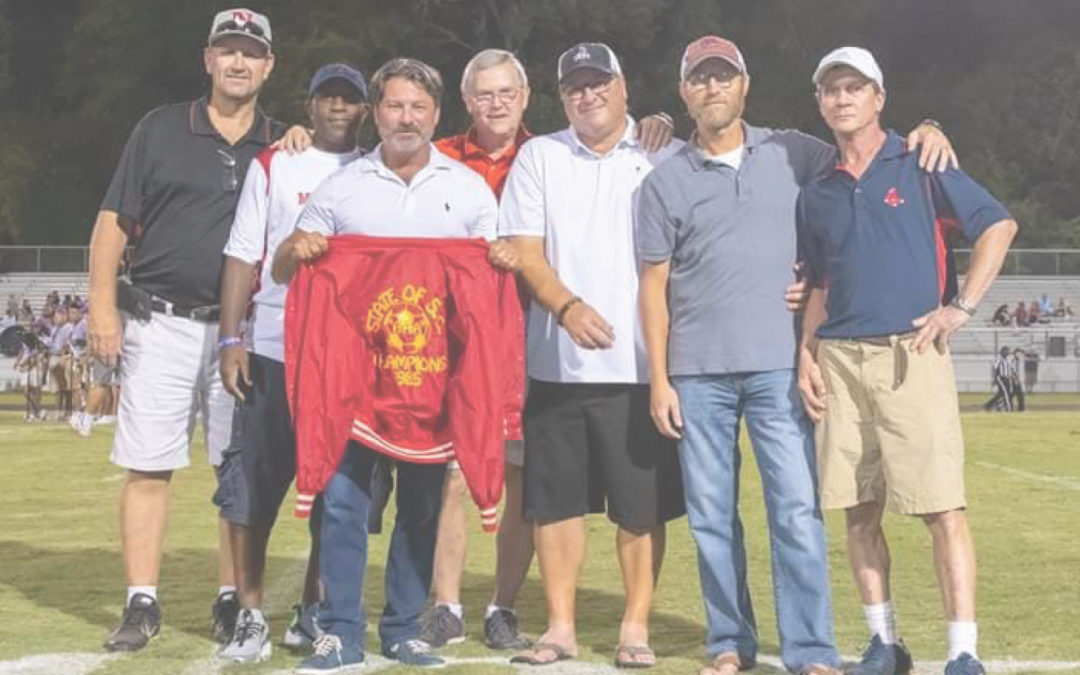 Photo: Members of the 1985 and 1986 State Championship Middleton Boys Soccer Teams pose for a photo during the Alumni Night Halftime Presentation at West Ashley High on Friday, Sept. 21 (Photo By Marc Ridel)

On Friday, Sept. 21st, West Ashley High School hosted Alumni Night, an event that has quickly become a treasured tradition after only a few short years. The event is intended as a homecoming-type event for all alumni from St. Andrew’s, Middleton, and West Ashley, the three West Ashley schools, to come together to celebrate the rich history and success each has experienced during its lifetime.

The game kicked off at 7:30pm with the Wildcats taking on the Stratford Knights. During halftime, alumni from the threee schools took to the field to participate in the Alumni Night Halftime Presentation. Each year on Alumni Night, West Ashley High recognizes different sports teams from each of the three schools who received state titles. Once all of the teams are recognized West Ashley High plans to move to individual state titles before eventually creating a hall of fame which will includes alumni, athlete or not, from each of the three schools.

Last year, St. Andrew’s Parish High School’s 1965 State Championship Boys Basketball Team, its players, mangers, bus driver, and coach were all recognized. This year’s honorees were the players and coach of the 1985 and 1986 State Championship Middleton Boys Soccer Teams. This night has become very important to the alumni from both St. Andrew’s and Middleton because it finally gives them a place to call home. “Alumni Night was more than just seeing friends from school,” said Mark Luckie, captain of the 1985 and 1986 teams. “It was about telling stories of old, watching great football by WAHS, and reconnecting with some of my favorite teachers and coaches.”

The West Ashley High School Marching Band, under the direction of Mr. Justin Hubbard, played all three alma maters at certain times during the halftime presentation. This served as one more way the alumni could celebrate the history of the three schools. While each song was played the alumni from that particular school were able to sing the words to their alma mater, making it seem, even if just for a minute, that they were back at their respective high schools, enjoying a great Friday night football game with their friends.