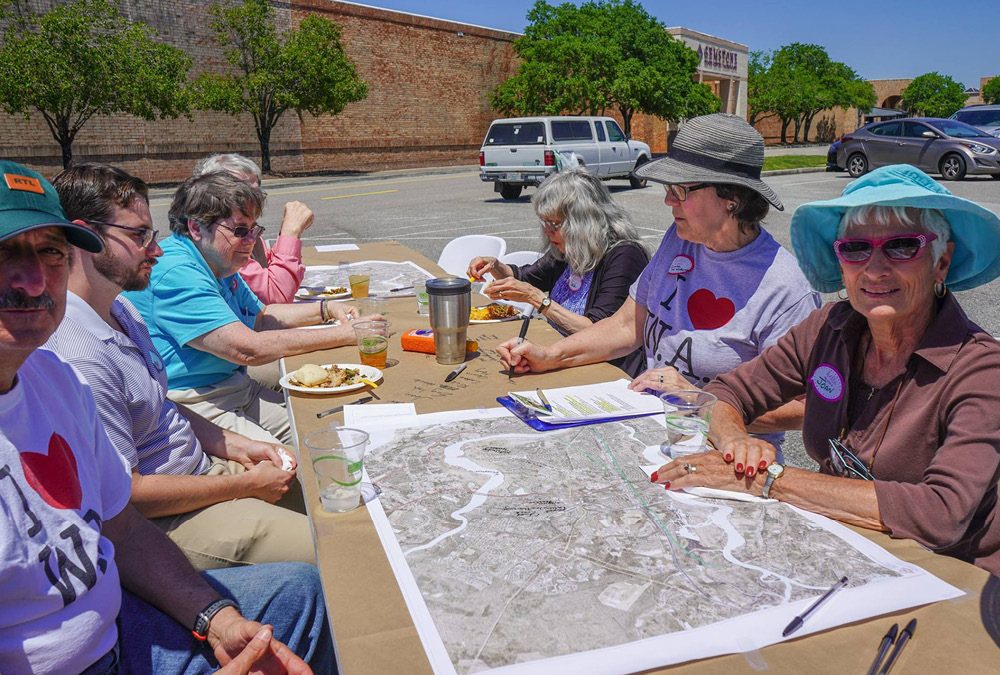 While its dreams might not happen overnight, the Charleston Parks Conservancy recently revealed its master plan for arts along the West Ashley Greenway and Bikeway.

Regardless, West Ashley United, a local non-profit advocating for the area, is jumping right in there.

Last year, the conservancy delivered its master revitalization plan for both vertical parks to the West Ashley Revitalization Commission for inclusion in the city’s efforts to spruce up and improve this part of town.

Last month, the conservancy unveiled its arts master plan, which executive director Harry Lesesne says is not meant to lock-in any single plan, but act as a “guidepost” for improvements along the bikeway and greenway, which will help with the area’s overall connectivity.

“The need for more connectivity. That is really one of the primary recommendations from Plan West Ashley for making West Ashley more connected,” Lesesne told members of the West Ashley-James Island Business Association (WAJIBA) last month. “And that’s a function that the Greenway and the Bikeway serve. It’s a huge opportunity for West Ashley to be more connected in a pedestrian way and a bicyclist way.”

Lesesne insists that no dollar amount, or funding source, has been identified in the plan. It’s just there to help, should City Council approve of its suggestions.

The city already spent millions improving the bikeway, by including landscaping elements into its drainage project that runs under the bikeway from Magnolia Road before it vents into the Ashley River.

The lush greenery and occasional pond show how much can be done with a bulldozer, as the first phase of the project was completed without a landscape architect

Lesesne’s most recent plan, completed with the help of a national design firm, includes what he terms as “interventions” on three scales. Perhaps the flashiest of the interventions is for gateway installations at points where the greenway and bikeway intersect with roads.

There, the plan foresees public art as “social sculpture,” like installing an enormous cast concrete couch at an intersection that invites pedestrians, cyclists, and those pushing baby buggies to sit a spell, and perhaps meet someone else from the community.

Other elements include public gathering spaces further off the beaten paths, where an outdoor stage could host a small play. (To view both master planning efforts, go to: www.charlestonparksconservancy.org/renovation/west-ashley-greenway-bikeway-renovation.)

One that excites Lesesne was the consultants’ suggestion of installing a long, steel table, painted and treated to look like a picnic table, to be installed in a small circular park near where the Charleston Tennis Center abuts the greenway.

There, large and smaller groups could co-mingle, dine together, share ideas, get to know each other better.

Which is exactly what happened on Saturday, April 27 when West Ashley United (WAU) joined with the city to host a Longest Table event in the parking lot of Citadel Mall.

With the city carrying much of the hard costs, and local businesses and schools chipping in food, WAU invited the public to come and discuss their solutions to problems vexing this part of town.

Donations were taken at the door for entrance to the event and set aside to help fund WAU’s latest pet project: improving the gateway intersection where Wappoo Road and the bikeway intersect, dovetailing with the conservancy’s master plan design parameters.

WAU founder Teresa Tidestrom estimates that the fund-raiser will raise a few thousand of the $20-$40,000 needed to redo the spot (see diagram below).

Tidestrom says it was important for her organization, seen by too many in her eyes as just a “Facebook” group page, to provide something “tangible” to the public. To see, she says, what her organization has become and for the public to gain a vision of what West Ashley could become.