The Power of Soup 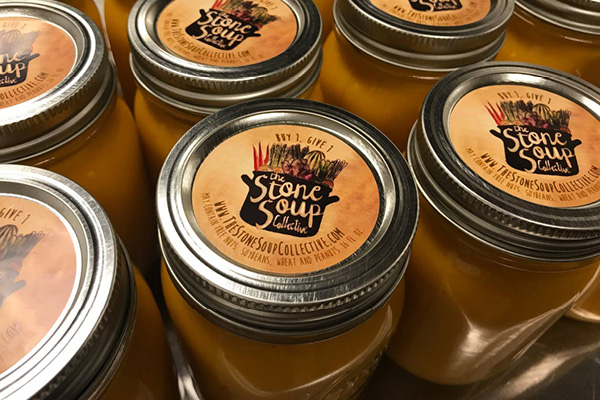 The story of Stone Soup is an old folktale that’s common in many different cultures, but the story is essentially the same everywhere. It goes something like this: Hungry strangers convince the people of a town to each share a small amount of their food in order to make a meal that everyone enjoys. It’s a story about food. It’s a story about generosity. But mostly it’s a story about community. And that is what the Stone Soup Collective is all about — community.

Made up of a group of committed Charleston citizens who share a vision of a community where all are nourished, body and spirit, by the abundance of the Lowcountry — its earth and its people — one bowl of soup at a time.

It may sound odd, the idea that community can be created or strengthened through soup, but that’s precisely what Stone Soup Collective’s founders Linda DeRemer, Jennifer Saunders, Dylan Duckworth, April Ballard, and Renee Orth think.

The small group of like-minded folks began making soup to give away in May of last year. By October they launched the sales side of the operation with a buy one, give one model. For every jar of soup you buy, one is donated to someone less fortunate in the Charleston community.

“It’s a love of community and wanting to give people the experience of what it is to eat healthy food, and soup in particular. It doesn’t have to be bland and boring,” says Orth.

The Stone Soup Collective makes and sells soup using primarily ingredients sourced from Lowcountry farmers and works with local charities to find people who are in need. They make the soup right here in West Ashley at the newly renovated multi-use facility The Schoolhouse on Magnolia Road. Orth says The Schoolhouse has been vary gracious in letting them use their commercial kitchen.

You can purchase soup at The Schoolhouse every Monday between 12-1:30 p.m. “Right now we make two soups per week, but as we grow we will be making more,” says Orth. You can also get Stone Soup Collective soups from other locations around Charleston. According to Orth, they now have a mobile app where you can track all the drop off points and route points.

Soups are $7 for a 16-ounce mason jar. If you bring the jar back you get a dollar off. For every jar of soup you purchase another jar is donated. Orth says that most of the soup that they donated goes to low-income seniors in Charleston. “They are often the most vulnerable and underserved in our community,” she says. Stone Soup Collective works closely with Charleston Area Senior Citizens, which handles Meals on Wheels in the area. “We are very eager to create partnerships with various schools or churches in the community,” adds Orth.

Like the folk tale it’s named after, the Stone Soup Collective isn’t really about food. It’s about using food as a conduit to build a better community. “Food brings families together. It’s how we bond with friends. Eating is something everyone does multiple times a day. It’s how we survive” is what the Stone Stoup Collective website says and it’s a philosophy the charter members live by.

Social scientists have documented the fraying of American community and the costs are tragic — loneliness, addiction, depression, suicide. The Stone Soup Collective exists, in part, to bring the people of Charleston together and give us the opportunity to nourish our neighbors as we nourish ourselves and our families. Orth and the other members of the collective believe we can reconnect, or deepen our connection, and be a part of a vibrant community.

The Stone Soup Collective isn’t just made up of its employees, its volunteers, and its benefactors, it’s also made up of everyone who eats the soup. Because of the buy-one, give-one model, you directly become a part of the community-building.

“The collective part of our name we take quite seriously,” says Orth. “We want to do things with the community rather than for the community.” If you are inspired by the idea of a better community through soup, consider joining the Stone Soup initiative, either by volunteering your time or talents, donating funds, or simply by buying a jar of soup.