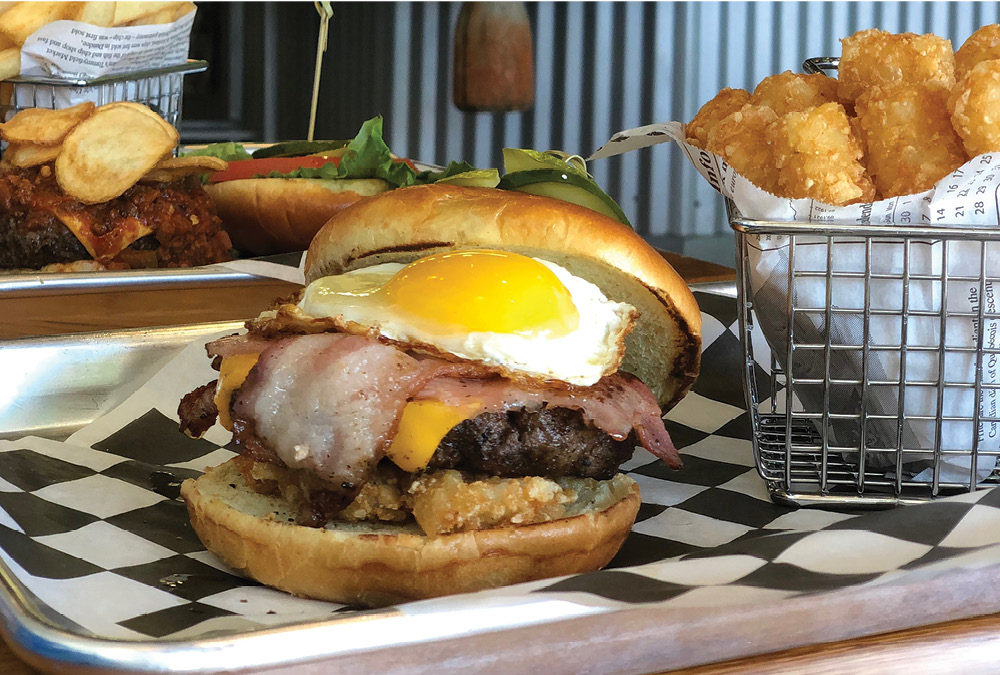 This time last year Greg Leonard was making an hourly wage building houses for Habitat for Humanity. Although he had spent decades in the restaurant industry, the father of two wanted to step away from the food and beverage world for a spell and try his hand at something different. He first volunteered for the nonprofit organization before he was hired on as a paid employee. Fast forward one year and he and his wife Ellen are now proud owners of not one, not two, but three restaurants in the area, including two in West Ashley.

Prior to his short stint as a homebuilder for Habitat, Greg worked for Delaware North, a global food service and hospitality company that manages and provides food and beverage concessions at large venues such as sports stadiums, entertainment complexes, national and state parks, airports, and casinos. It was Greg’s job that brought the Leonard family From Denver to Charleston in 2013 when he became general manager of the food services at the Charleston International Airport.

At the beginning of the year, after almost a year away from the restaurant business, Greg and Ellen started to look for restaurant spaces to open their own place. They first had their eye on buying the Charleston Burger Company, which was located in the Bi-Lo shopping center at the corner of Ashley River and Bees Ferry roads.

“We loved how small it was and loved that we could be in here every day,” recalls Ellen. But they could not come to terms with the seller and eventually had to move on to other options. They ended up buying and taking over Big Billy’s Burger Joint in North Charleston, located next to the North Charleston Coliseum near Tanger Outlets. It was a much larger space than they initially had planned for, but they took on the challenge with enthusiasm and quickly had the restaurant and bar in ship shape.

“It was a monster restaurant, really big, with a huge bar! It was everything we said we didn’t want,” says Ellen laughing. About six months later, just when things were starting to calm down Greg and Ellen were sitting on their back porch and the phone rang. The Charleston Burger Company spot was again back on the table. Ellen was surprised to hear Greg say that he was still interested in the space, despite having just taken over a much bigger restaurant. And that’s how Little Big Billy’s Burger Joint came to be, which officially opened its doors last month.

Although the West Ashley location was quite a bit smaller than the original Big Billy’s in North Charleston, the Leonards had a successful restaurant template in place with a proven menu. Oh yeah, and in the meantime, they also took over The Cracked Egg in the Inidigo Village Shopping Center on Savannah Highway. So now they were proud owners of three restaurants.

Having worked every job possible in the restaurant industry, Greg was right back in his element at Big Billy’s. Ellen’s background, on the other hand, is in the financial sector. And while she handles most of the front-of-the-house duties for the three restaurants, she’s not afraid to literally roll up here sleeves and jump right in to help wherever she can.

For a decade-and-a-half, before moving to Charleston, Ellen handled the books for Boulder Brewing Company in Colorado. “I love being in the restaurants, but I do not cook,” says Ellen, joking that when at the restaurants she tries to wear something highly flammable so she doesn’t have to go into the kitchen. But she recalls one time, when the kitchen was short-staffed, she asked Greg how she could help. She ended up grinding 400 pounds of meat that day.

“I normally don’t like to touch anything raw and when I was done my arms were covered in chunks of raw ground beef,” she recalls laughing. According to Ellen, Big Billy’s grinds their beef in-house daily, which makes a huge difference in the flavor and texture.

The extra effort is noticeable when you bite into a Big Billy’s signature burger, like the popular Bacon, Black & Bleu burger, which is seared with blackening spices and then topped with caramelized red onion, applewood smoked bacon, and bleu cheese  or the ‘I Wanna Lei Ya’ Burger, which is topped with black forest ham, pineapple, and melted provolone cheese or the Breakfast Burger, which is served with a fried egg, applewood smoked bacon, grilled black forest ham, hash browns, and American cheese. All burgers are served on a sweet artisan bun, lettuce wrap, or gluten-free bun.

In addition to their traditional Certified Angus Beef patties, every day of the week they feature a special wild game burger — Monday is wild boar, Tuesday is alligator, Wednesday and Friday are Bison, Thursday is “Owner’s Choice,” Saturday is venison, and Sunday is elk. All the alternative meats at Big Billy’s are all-natural, free-range, grass-fed, and 100 percent antibiotic and hormone free. “We don’t freeze anything, so we run it until it’s out,” says Ellen

While burgers are their thing, Big Billy’s also offers plenty of other options, like it’s Mahi Mahi Beach Burrito, Sail Away Salmon BLT, Turkey Reuben, Buffalo Chicken Wrap, a quarter-pound hot dog, 3-cheese and bacon grilled cheese, and fresh salads, which can be topped with salmon, chicken, or Mahi.

Little Big Billy’s Burger Joint in West Ashley celebrates its grand opening Thursday, Dec. 5 beginning at 4 p.m. with 10 percent of their profits going back to Habitat for Humanity.

“We are already seeing more regulars in West Ashley than we do at the other location. West Ashley has definitely embraced us,” says Ellen.