Still the Spot for Tacos 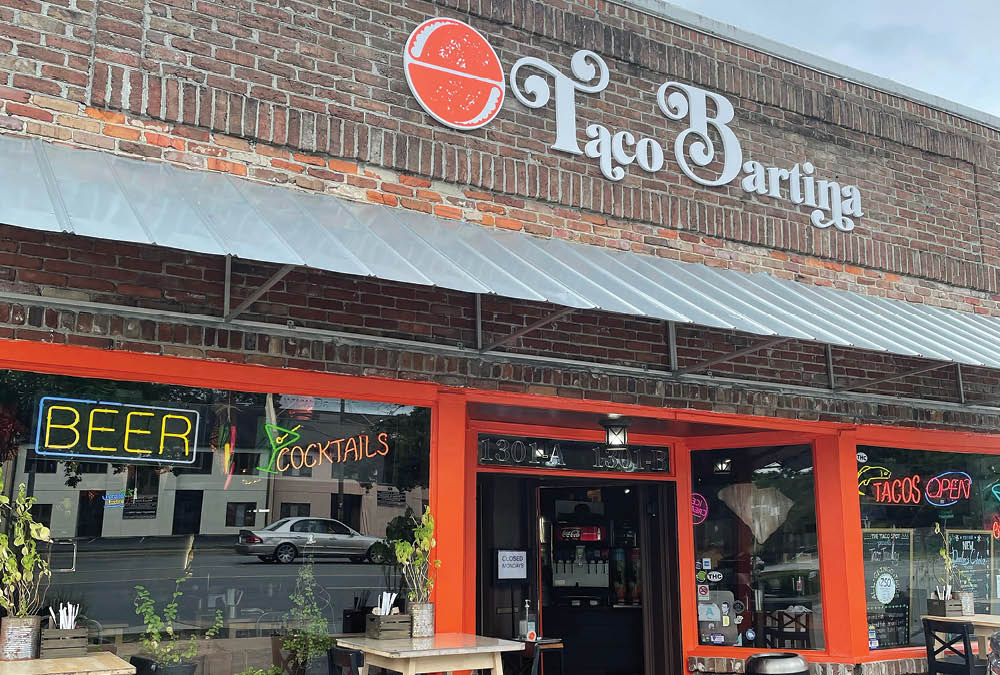 The Taco Spot is now Taco Bartina. There’s a new sign to go with the new name, but rest assured, it’s the same great local spot for tacos run by your same neighborhood taco dealers.

Thirteen years ago, West Ashley resident Jason Vaughan opened a small storefront restaurant on St. Andrew’s Boulevard, specializing in tacos. He named it The Taco Spot and it quickly became the spot to get tacos in West Ashley, as well as burritos, quesadillas, nachos, and other Tex-Mex favorites. He and his wife Lindsey ran the place and even expanded it into the adjoining building to double the size of the original spot. They built a reputation as a place for good, reliable, affordable food.

In the time since The Taco Spot has opened, a plethora of other spots for tacos have opened in West Ashley, such as Mex 1 Coastal Cantina, Los Reyes, La Hacienda, Three Matadors, El Molina, Agaves Cantina, and Taco Kitchen. But Vaughan’s biggest headache wasn’t the competition from other hometown taco spots, it was dealing with the confusion from other Taco Spots in other towns. Actual Taco Spots, restaurants named the same as his popular Charleston restaurant had popped up in places like Arizona, California, Florida, Illinois, New York, and Texas.

Thirteen years ago when he opened his restaurant, Vaughan says didn’t think it was necessary to trademark of the name. Since then, the explosion of online review sites like Trip Advisor, Yelp, not to mention social media, has created quite a bit of confusion. Often times, Vaughan’s Taco Spot absorbed bad reviews meant for other Taco Spots around the country.

“People go online and complain about things we don’t even have on our menu,” says Vaughan. “Or they come in looking for something that they saw posted online that we don’t have.” He says one lady was mad because her margarita didn’t look like the one in the photo online. She had a picture on her phone of another Taco Spot which featured a fancy glass and margarita with all kind of adornments that didn’t resemble the house margarita served at our local Taco Spot, which is made with fresh-squeezed lime juice and is only $7 ($5 at happy hour).

“I said ‘that’s a good-looking picture, but that’s not us,’” recalls Vaughan.

Despite owning the coveted www.tacospot.com domain, the confusion became too frustrating for Vaughan, who was constantly fielding calls from angry customers who had a bad experience at a Taco Spot in Hollywood, Fla. or having to combat a negative online review for a Taco Spot in Chicago or Los Angeles.

“We got an attorney involved,” says Vaughan. “But I can’t make everybody change their name, so we decided to rename the place something unique that no one would use.” Vaughan says that they came up with Taco Bartina, which is a combination of bar and cantina. And yes, this time he got the domain and the trademark. The last thing to go through is getting the logo trademarked, which takes a little more time, says Vaughan.

When the new sign went up out front last month, it caused some long-time patrons to worry that The Taco Spot had closed or changed ownership. But Vaughan assures his supporters that little has changed within the restaurant other than the name on the front of the building and on the menu. The only noticeable difference is after 13 years in business, that the restaurant formerly-known as Taco Spot now has a frozen margarita machine. So now you must specify whether you want your margarita frozen or on the rocks, salt is also optional. Just don’t show the bartender a photo of a margarita from another restaurant.

Taco Bartina is located at 1301 Ashley River Road in the Carriage Lane Shoppes. For more information or to place a to-go order call (843) 225-7426 or visit