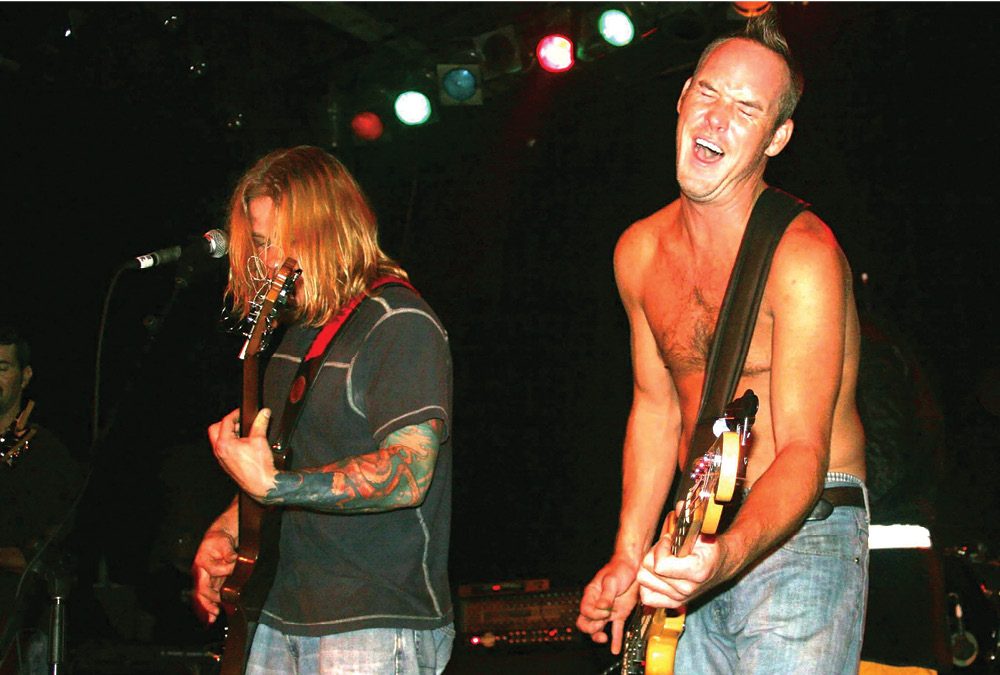 Two decades ago, the band Wormbelly broke onto the local music scene with a unique style of genre-bending rock ‘n’ roll and fiery live shows that consistently packed venues and created quite a buzz. That buzz lasted for the better part of the next decade before the band finally called it quits, but not before putting out two stellar albums and playing countless shows. In recent years, members of Wormbelly have gotten together from time-to-time to jam and even played a few reunion shows.

Frontman Chris Patterson and bassist Todd Few have remained close over the years and even formed another band, called the Dali Drama, several years later, which found some moderate success locally, but never quite reaching the stature of Wormbelly among the Charleston music scene.

“The itch to create music never goes away,” says Patterson, admitting that for the last year and a half he and Few have been “under the radar” collaborating together on a new project. This time around they’ve teamed up with local drummer Rob Fabian to form The Lost Cosmonauts, who will play their first public show at the Tin Roof in West Ashley along with fellow local band Black Power Mix Tape on Saturday, Sept. 7.

Patterson and Few say having Fabian on board brings a different perspective to this band, since he’s a few years younger than they are. “Other than being a hell of a tight drummer, he smokes a great (Boston) butt,” says Patterson.

Few and Fabian previously played together in the band Unit 8 for a while. The band won 98 Rock’s Battle of the Bands, played 98 Rockfest as the local opener with Breaking Benjamin, Halestorm, Killswitch Engage, Lita Ford, and others. Shortly after that Unit 8’s guitar player left, so of course Few suggested bringing in Patterson as a replacement.

“So Chris, who had done some successful reunion shows with some of the early Wormbelly line-up joined in as a replacement guitarist with four other guys in an already established band, which was a cool experience, just handling guitar duties,” says Few. “Unfortunately Unit 8 didn’t last much longer. Chris played maybe one or two shows with them before a few of the guys got married and the band dissolved.” The three West Ashley residents and former bandmates continued to hang out, smoke BBQ togeher, and just be social. Of course, this ended up with them playing music together again.

When asked if Patterson and Few were the Charleston version of Keith Richards and Mick Jagger, the entire band laughs. “Maybe more Hall & Oates. Todd can grow a killer mustache,” says Patterson.

Perhaps a comparison to the Rolling Stones is not appropriate, but for longtime local music fans it’s impossible to see Patterson and Few together and not compare them to their previous bands.

“We’re smarter, better musicians, tighter, we’ve all grown up … at least a little bit,” says Patterson. “The local music scene has changed a lot too though. I don’t plan on us selling out the big local venues like we used to again anytime soon. Not even sure if they let local bands play there anymore. There’s so many cool clubs gone now but also some great new ones have come up.”

The band was asked if a Wormbelly fan showed up to the Tin Roof on Sept. 7 would they be totally shocked at what they heard or is there still plenty of Wormbelly DNA in what The Lost Comsmonauts are doing? “They’ll be a bit surprised but also comfortable,” says Patterson. “We are still mixing up musical genres and doing things our own way.”