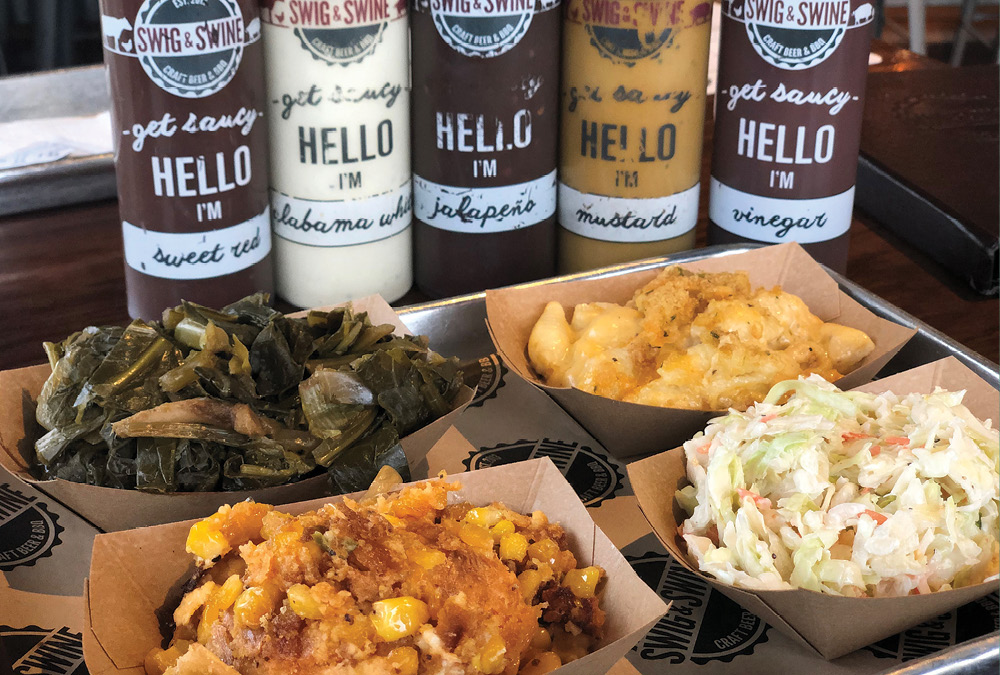 For a barbeque place, Swig & Swine has plenty of meat-free options

West Ashley vegans and vegetarians proclaimed a collective ‘Praise be!’ when Whole Foods opened the doors of its Savannah Highway store in August of 2018. No longer would we have to pack up the car, board the dogs, say goodbye to friends and family, and make the arduous journey to Mt Pleasant just to stock up on jackfruit and bulk chia seeds. It wasn’t long before the Doscher’s parking lot was chocked full of Subarus clad with NPR bumper stickers, and West Ashley residents like me were gladly emptying their checking accounts and figuring out how to install the Amazon app just to take advantage of all of the Prime deals on organic carrots.

It was only with a sidewards glance that we would see Swig & Swine on the way out of the parking lot. Those commuting to the peninsula from West Ashley would likely have noticed the wry puns displayed on their sign, alongside the painted mural, ‘Horrifying Vegetarians Since 2013’. While vegetarians may not be the restaurant’s primary demographic, pitmaster and owner Anthony DiBernardo has more up his sleeve than just his signature hog. Once recovered from her initial shock, disbelief, and horror, our server Kirby very adeptly guided us through the considerable assortment of vegetarian options. She was even thoughtful enough to disclose that the fried pickles were cooked in the same fryer as the fried chicken, just in case that was a deal-breaker.

It was a Friday afternoon, so it would be rude to start dinner without rye whiskey. ‘The Tumbler’ features Redemption rye, soda water, simple syrup, and a sprig of rosemary picked from right outside the front door. It’s an unassuming, uncomplicated drink that lends itself perfectly to the surroundings and prepares you for the home-cooked food to come. For vegetarians in a BBQ restaurant, sides are king. Of the ten standard sides here, six are safe and delicious for vegetarians. The menu allows you to pick four items to make a side plate, and it was plenty of food to satisfy both of us, but don’t let that stop you from ordering more. The mac and cheese is a must-have, with big creamy shells topped with breadcrumbs. There are not one, but two coleslaws to choose from, including a vinegar-based slaw, a little sweeter than its mayo-based cousin. The corn pudding is southern comfort food in its purest form, a delicious mess of corn, butter, cheese, and magic that will transport you back to childhood.

Collard greens are a BBQ staple that vegetarians are usually denied because of the inclusion of various chunks of meat… not so at Swig & Swine. Their collards are cooked in a vinegar and onion base, giving them a wonderful, citric acidity, bursting with bright flavor without robbing the greens of their earthy, rich taste. Before you’re out the door, finish off your veggie feast with something sweet. There are plenty of options to satisfy your sweet tooth, but I saw no reason to read further than chocolate bourbon pecan pie.

All of the delicious vegetarian flavors at Swig & Swine are enhanced by the sweet oaky aromas of wood smoke and BBQ sauce hanging in the air. After all, there’s nothing in the vegetarian code of conduct that says we can’t enjoy the smell of perfectly cooked BBQ.

Swig & Swine is located at 1217 Savannah Hwy in West Ashley, ​with other locations in Summerville and Mt Pleasant.

Aaron O’Brien is a native of Great Britain and now lives in Charleston. He and his wife Christina make up local musical duo Oh Valentino. They eat out far too much and when not performing, can usually be found exploring vegan, vegetarian, and pescetarian options at various restaurants around West Ashley.