MVPs of the Pandemic 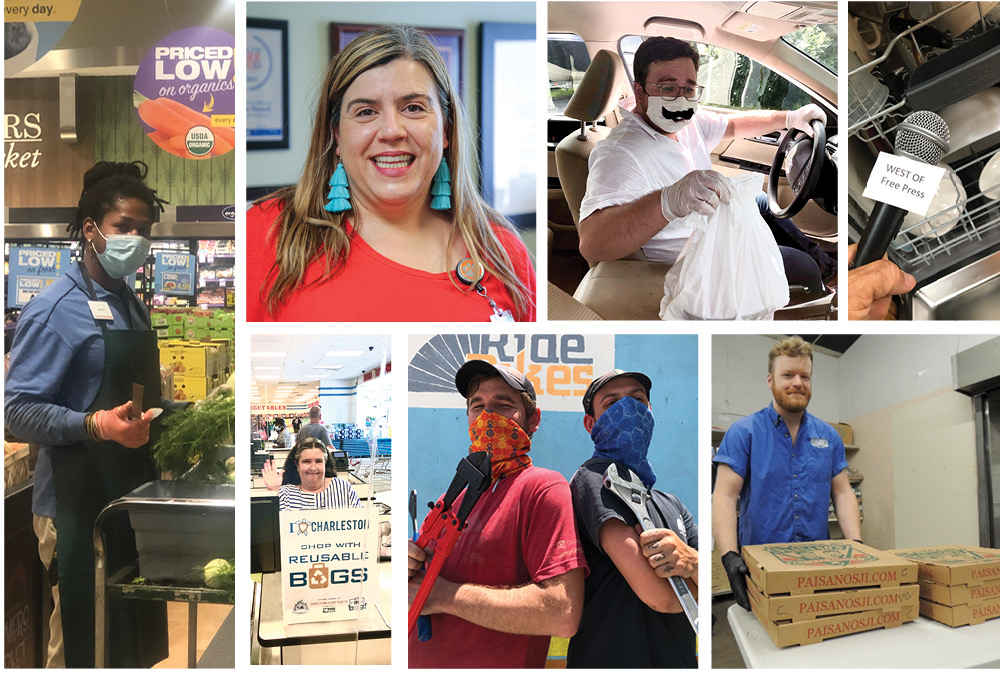 Some workers in West Ashley have proven themselves beyond “essential” by making our lives better, saner, and a bit like they used to be before the shutdown.

They had to strap it on, from boots to face masks, and head into work and cook food, stock shelves, pick up trash, test potentially sick people, keep the streets safe, give us some place off the streets to walk and ride bikes, fix those same bikes which had been gathering dust, drop food off at our houses, and so on.

There are too many to name, and too few pages this week to tell you all their stores. Here’s but a handful of the Most Valuable Persons in West Ashley:

Hagan Ragland, an aspiring comedian and performer, has been working for Uber Eats for coming on three years. And he has never seen it this busy since the food delivery app was going through its initial novelty phase when the service first began.

Clad in a mask and nitrile gloves, he has found that most people choose for him to drop off the food, hit the doorbell, and then dash. He gets tipped, yes, but not right away.

Ragland, who rents in Ashley Forest feels for the restaurants he delivers for, because “they are on a skeleton crew; one person in the kitchen and another on the phone and computer handling all the online orders,” he says.

Sometimes, customers aren’t nice when service is slow, “but I understand that, everyone is so stressed out,” he says. But for the most part, “everyone I’ve delivered to has been very thankful, and they tip, which is nice, but sometimes people send messages or leave a note saying, ‘thank you,’ It’s very sweet and makes me feel good.”

Around the corner on St. Andrews Boulevard, the crew at Ride Bikes is on the rivets, working hard to meet the demand for new bikes and repairs. Longtime customers looking for a quick tune-up are told to leave their bike and come back another day. First-timers sometime have to wait a few days before the shaved-leg gang to turn a warped potato chip into a functional wheel.

Ride Bikes has taken the shutdown very seriously, as every worker is masked and gloved up, and all business is done outside in their rear parking lot. There is a plastic folding table between the customer and the mechanics. There’s even an arching blue-tape line on the driveway telling shoppers how close they can come.

The work week has been cut down to five days for a total of 29 hours. And yet new bikes roll out, and old bikes stop squeaking, even if it takes a little loner turnaround time than normal.

And when people head out on bikes, they find streets almost ghostly empty at hours when they’d usually be crawling with cars. Even then, most cyclists prefer to head over to West Ashley’s green- and bikeways.

It’s been so crowded with cyclists, walkers, strollers, runners, and the like at times it was hard to keep a 6-foot distance from each other.

The city’s parks manager Jason Kronsberg says there’s no way of doing a headcount, but he’s sure the “ways” have never been busier. And that’s great news, as it doubtless means more people discovered they provide great opportunities for exercise, bird-spotting, and non-car transit.

“There’s been a HUGE increase in use, after everyone has been cooped up inside,” says Kronsberg. Here’s some good news: it’s only going to get better. Aside from some of the newly-installed sculptures by the Charleston Parks Conservancy, Kronsberg says next will be implementing the city’s “Greenway Master Plan” created with the conservancy.

First up will be intersection enhancements to make crossings and intersections safer. Next up will be beautification and landscaping, to include water fountains. The Bikeway, winding from Wappoo Road to Higgins Pier on the other side of St. Andrews Boulevard, will also be resurfaced.

Those who ventured off the Greenway onto the Bikeway found one of West Ashley’s hidden gems, with its winding path and water elements pouring into its curves, in the future Kronsberg says it will offer the most flexibility for renaissance as the city owns it outright. The local water system leases the Greenway to the city.

But you can’t venture out on either of the ways if you’re not healthy. That’s where longtime nurse Amanda Biondi comes in. She is literally on the frontlines of the corona virus battlefield.

West Ashleyian Biondi helps run and man the Roper St. Francis Covid-19 testing site in North Charleston. The day she spoke to the paper, she had overseen testing on 30 people, with a max of 213 in a six-hour period on a single day a few weeks before.

She and her staff have swabbed everyone from children to grandparents. “Covid-19 doesn’t know or care how old you are,” she says.

“We use professionals who are highly trained at specimen collection – from a regular nurse to a physician’s assistant or a doctor of medicine – to do the swabbing while following best practices guidelines,” says Biondi, who also runs a health clinic for those without ability to pay. “The line goes very quickly.”

“It’s not scary at all; we are trained to do it,” says Biondi. There’s plenty of PPE – personal protection equipment – to go along with the training. “If we were fearful, we would transfer that to the patient, and that is something we do not want to do,” she says.

Sylvia Kellet makes sure everyone gets what they need at Doscher’s IGA on Savannah Highway, the “little store that has everything you need.”

Over the past six years, her second stint with the grocery, she has worked her way up from cashier to bookkeeper, but she’s not afraid to get behind a register or bag groceries.

“Over the last couple of weeks, it’s been like a hurricane around here,” says Kellet, likening the run on toilet paper to the run on milk and bread once Jim Cantore shows up. Over her shoulder on one of the aisles is a cache of Cottonelle that other stores can only dream of.

“We might not have the brand you’re looking for, but everyone leaves with what they need,” says Kellet. Purifying alcohol products and disinfectant towelettes have been the hardest to keep on the shelves, but with three trucks coming a week, the most anyone has to wait for what they need is a day.

Kellet describes some of the customers, haggard by confinement and possibly an overload of family, as “growl-y,” but for the most part “West Ashley is a nice place with nice people,” she says.

Thanks to all the Sylvias, Amandas, Jasons, bike monkeys, and Hagans.