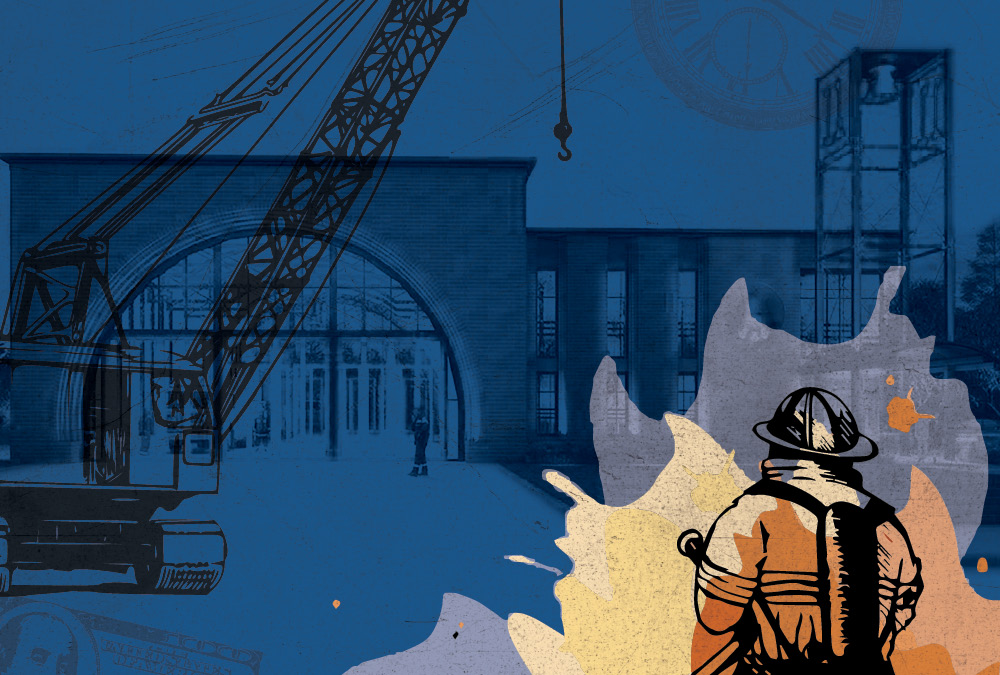 Work is several months delayed on the new firehouse on Savannah Highway that overlooks the Charleston Nine memorial through one window each for the number of firefighters who died at battling a blaze at the Sofa Super Store on June 17, 2007. It was the deadliest firefighter disaster in the United States since the September 11 attacks.

Beth Brownlee, the city’s construction manager overseeing the project, says the firehouse is “between 60 to 65-percent completed,” and that the $5 million-plus project will likely be completed sometime in May.

As of press time, the firehouse didn’t have a crucial city Design Review Board approval, much less electricity.

Until the project is completed, the contractor, NBM Construction Co., will owe the city $1,200 a day in late fees. That is, if the city continues to deny the venerable construction firm’s requests for relief.

So far, the city has refused all of them.

Additionally, the city is having to pay $2,500 a month to lease back the currently in-use firehouse down the street at Baker Motor Company. Once the new firehouse is completed, then the dealership company can continue with its expansion plans for the site in shouting distance from the old IHOP.

So far, the city has paid out $62,500 in rent on a five-year lease on the station, according to Amy Wharton, the city’s chief financial officer. The city paid no rent for the first year of the lease.

Construction began on the contemporary design for the new firehouse in 2018, and if the same pace of work continues, then August may be a more realistic completion date — a date both Brownlee and NBM president Will Danielson both disagree with.

If it’s true that the smaller the tool, the longer the work, then with the big stuff out of the way, the more tedious detail work is what’s left.

Additionally, the city has only paid for work done, in keeping with its policy of not advancing money on work yet to be completed.

City Councilman Peter Shahid, whose district on Council adjoins the part of West Ashley where the firehouse is being built, has had concern from constituents about the pace of construction.

When asked if Council was considering contacting the bond company that ensures the project will be completed, Shahid says that the entire project was discussed in January in executive session and that he is not able to share what was said.

Brownlee says she’s heard the public concern about the slow work and the “appearance” of crews not being onsite on a regular basis. But, she assures, multiple crews have been banging out crucial elements in the construction process every day of the week.

The proximity of the project to Savannah Highway and the history of the site may have added to the public’s interest and concern. But now, crews no longer have to park up front, and are able to access the back of the lot off Pebble Road, potentially adding to the public perception that no one is there.

“Someone has been there, working every single day of the week, except the week of Christmas,” she says. Brownlee was also in charge of the Waring Senior Center, which was several months overdue before it finally opened.

Brownlee, on the day she was interviewed for this story, says there were no less than six crews working on the interior of the building.

Danielson, who started at NBM 17 years ago, says his current projections puts the completion date no later than late May.

“Some of [the delays] are things we normally see in construction projects, additions and modifications, change order work, normal rain days we enjoy in this wonderful climate,” says Danielson.

But the biggest factor in the delays, he says, is that the construction “labor market is certainly affecting projects in Charleston; everything being built is experiencing a lack of labor, so things take longer to do.”

“Would we like to be further along in the project? Yes,” says Danielson, adding that is not “usual” to be so deep into a project and still not have DRB permitting completed.

But once some issues get ironed out, like finding a supplier for some specific equipment for use inside the firehouse and solving how the roof will meld into the brick exterior, Danielson says that what will be finished will be an asset to the community.

He says he understands the city’s concern, but adds, “look at our record: NBM has never not finished a job.”