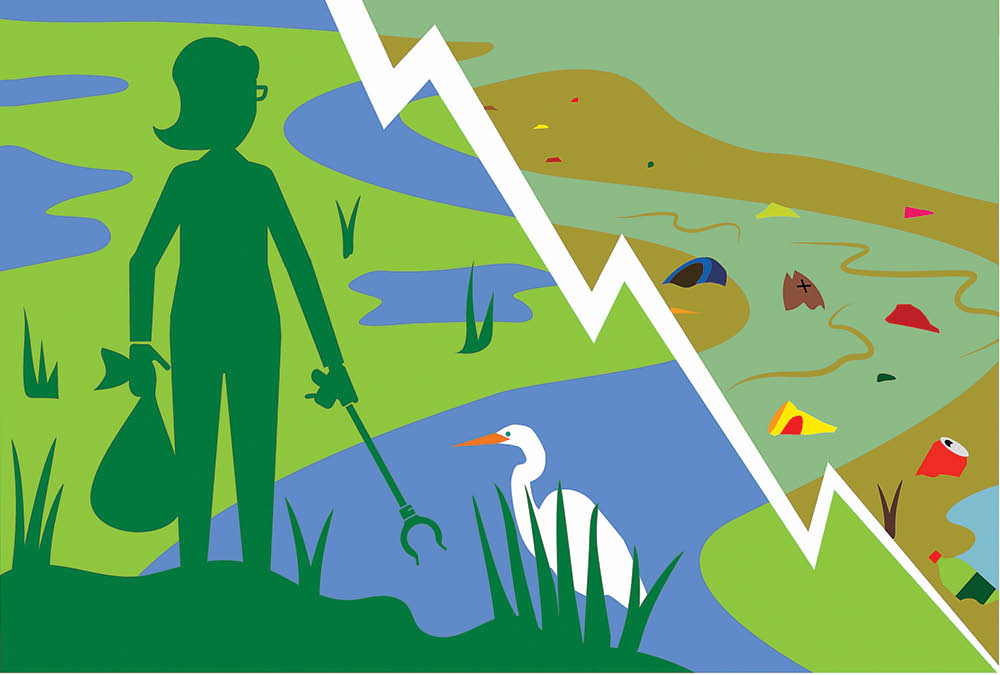 Five years ago, a small group of local residents had a vision for a better West Ashley.

They created an organization to help achieve that vision, calling it West Ashley United. The group’s Facebook page became wildly popular among residents as a source for local meetings, updates on road projects, public safety concerns, and, of course, the usual social media hijinks that inevitably arises in such groups.

The moderators of the site did the best they could to temper the negativity. One sure fire way to get yourself booted from the page was to refer to our community as “West Trashley.” The term simply wasn’t tolerated amongst a group of people working to create a positive image for West Ashley.

“It’s a derogatory term that sends you back two steps with any positive strides you’ve made,” says Tidestrom. “To me, there is a difference. Let’s use Mt. Pleasant as an example: They have the luxury of having SCDOT, county, and a township make sure their area is for the most part litter free and have heavily invested in streetscaping. The native plantings in the medians and sidewalk areas are beautiful. This is also one of my goals. Although we won’t boot people for it now, if used to insult what we are trying to do, that person will be checked.”

To get rid of “trashley,” you have to get rid of the trash. So trash and litter are firmly in Tidestrom’s crosshairs right now with her new initiative Keep West Ashley Beautiful.

“We already have Keep South Carolina and Keep Charleston Beautiful as well as Palmetto Pride, which also handles the Adopt-a-Highway program,” says Tidestrom. “Each have a list a mile long and many requests daily.”

She says the mission of Keep West Ashley Beautiful is two-pronged, one is restoring and helping booster pride and ownership in our community and the other is education of government processes.

In addition to bringing pride and ownership to West Ashley, Tidestrom is building a coalition with various agencies and organizations, which will help get requests for areas in West Ashley done in a timely manner.

A great example of this occurred recently when Tidestrom received an email from Mallory Coffey, the Community Outreach Program Manager with Keep South Carolina Beautiful. The organization had received an email her about an area on Clayton Drive that was filled with litter. Jamie Gillette with Keep Charleston Beautiful informed that West Ashley Connects could help.

“I went over and I was able to knock it out myself in a little under two hours,” says Tidestrom, who hauled off three bags of trash from the area. “Unfortunately, I managed to cut my finger on a rusty computer monitor and had to get a tetanus shot. Those are no fun but heck I’m now covered for the next 10 years!”

According to Tidestrom, she is currently working with Mallory to become an official affiliate with Keep South Carolina Beautiful.

“People need to stop relying on the city and county for some of these things that they can do themselves,” says Tidestrom, who has already organized several large-scale litter clean-ups in the area over the last month or so as part of her Keep West Ashley Beautiful initiative.

So far there has been a large cleanup in the part of West Ashley Circle that faces Walmart, yielding 19 full bags of trash and a heap of large debris pulled from the outer wooded area. Keep West Ashley Beautiful also did a cleanup recently in the Randolph Park vicinity.

“The park itself was in great shape thanks to one resident so we chose to go down Pearlott to Wappoo, up to the Greenway and back down to the park,” says Tidestrom. “I never saw the final bag count but it was quite a bit and again, a lot of debris pulled out of the drainage ditches. We also cleaned out three ditches along the way.”

Another litter sweep for the West Ashley Bikeway at White Oak Drive was originally scheduled for Saturday, April 24 but because of inclement weather, it was rescheduling for Saturday, May 8. After that, Tidestrom says there will be a cleanup on Wappoo Road, between Savannah Highway and Ashley River Road, which West Ashley Connects has officially adopted from the Adopt-a-Highway program. She says there will also be an upcoming litter sweep on Orange Grove Road very soon. Tidestrom says her plan is to organize a larger group for each pick up and is waiting for approval from SCDOT to also get some streetscaping done in some those areas.

“I hope we can keep the momentum going with the sweeps,” says Tidestrom. “If we can get residents and hopefully businesses to step up, we can play a crucial part in keeping our area as clean as possible.”