Just a Stone’s Throw Away 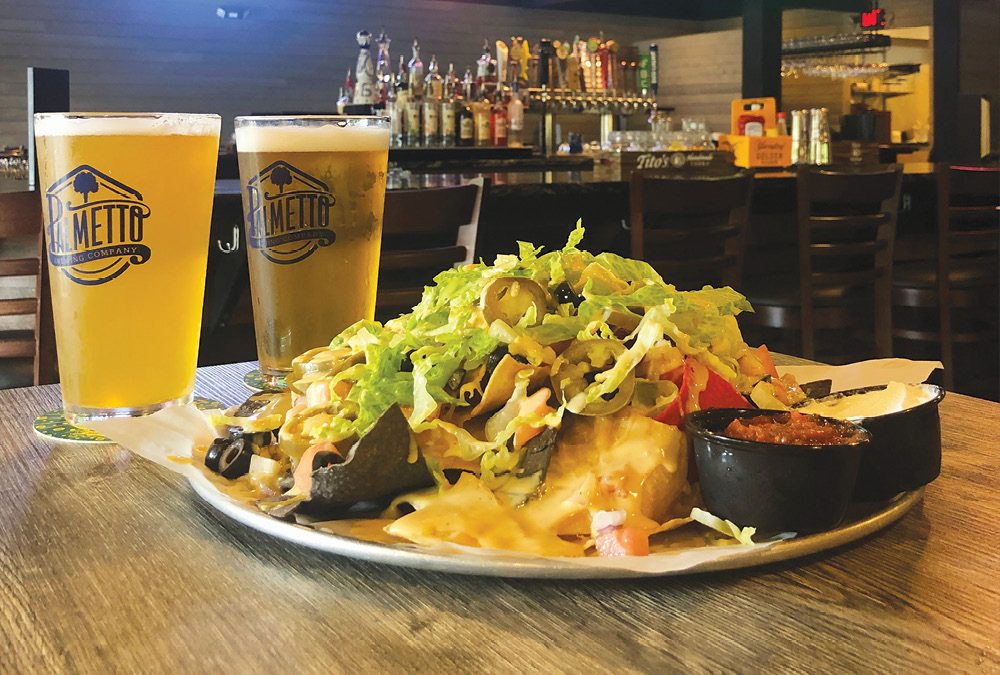 Local restaurateur Steve Stanec has worn out the asphalt between his home in West Ashley and his two restaurants, North Park Grill and Heroes Pub, located in North Charleston and in Goose Creek respectively. So when he opened his third restaurant closer to home, he aptly named it Stone’s Throw Tavern. While it’s slightly more than a stone’s throw from his home in the Hunt Club neighborhood to the space formerly occupied by Parsons Jack’s Café, it’s still just a short drive from his front door.

With two previous restaurants already under his belt, the former IT executive at Piggly Wiggly had the routine down by the third time around. Within a couple months, Stantac and general manager Rob Kennedy personally gutted and completely renovated the entire space. Stone’s Throw officially opened for business mid-July and has steadily been building a loyal clientele from the surrounding neighborhoods on Glenn McConnell Boulevard and the Bees Ferry’s corridor.

“Friends in my neighborhood are always complaining about the lack of stuff in this part of town. They’re always saying ‘there’s nowhere to eat. There’s nowhere to grab a drink,’” says Stanac who saw an opportunity when Parson Jack’s Café closed it’s doors after more than a decade in business. Before leaving, Parson Jack’s owner Steve Morgan took down the thousands of $1 bills patrons had tacked to the ceiling of the restaurant and donated it to two local animal shelters. Pet Helpers and the Charleston Animal Society split the more than $6,000 that was removed.

There are no dollar bills on the walls or ceiling of Stone’s Throw Tavern, instead there are much cleaner lines and open spaces. The 360-degree bar has 18 TVs above it with all the major sports packages just in time for the start of college and NFL seasons. “I just wanted to create something that was nice and fun and relaxing,” says Stanec.

Originally from Youngstown, Ohio, Stanec was living in West Palm Beach, Fla. before he moved to Charleston 12 years ago.  A bit of a Renascence man, he admits that he accidentally got into the restaurant business. In addition to being a successful IT professional, he now has three restaurants to his name, owns a commercial construction company, and a paint your-own-pottery studio located in the Northwoods Mall called Palmetto Clayground. But that was never the plan, according to Stanec.

“I was working with a broker and looking for a business to buy and he showed me a restaurant space,” recalls Stanec. And just like that, the former IT guy was now a restaurateur. Even though all three restaurants are in other parts of town, Stanec says each one has a different feel, different menu, and different crowd.

However there are some standards that Stanec expects between all of his restaurants. “They’re all different but all consistent, with simple ingredients, and good quality. I never want to be known as a place that serves crappy bar food. It’s a big step above your standard bar food,” he says.

At Stone’s Throw some of the top menu items have been the hand-pattied burgers, the Fish an&d Chips, and the Cray-Cray Shrimp, which are hand-breaded, deep-fried, and then topped with a sweet cream sauce and served with a side of spicy ranch. The loaded nachos are also popular and can feed a group. In addition to traditional bar food — wings, burgers, chicken tenders, cheese sticks, etc., Stone’s Throw also has several entrées that on the menu, such as a 6-ounce Filet, the aforementioned Fish & Chips, Chicken Alfredo, and a Country-Fried Steak. Good news for the night owls, Stone’s Throw is open until 2 a.m. and offers its full menu up until 1 a.m. every night.

According to Stanec, he doesn’t believe in using gimmicks like half-off burger nights or other tricks to get people in the door. He says he’d rather have a steady crowd of loyal customers who know they can always count on a consistent meal at a fair price. That being said, Stone’s Throw offer Happy Hour Monday through Friday, 4-7 p.m.. It is also open for brunch Saturday and Sunday, offering traditional favorites like Shrimp & Grits and Chicken & Waffles.

And while Stanec is hands-on when it comes to the design and construction of the restaurant, he leaves the menu and food preparation up to the professionals, joking that he’s kind of a burnt steak and potato guy.

In addition to the food, Stone’s Throw offers 24 rotating taps of craft beer. “I’m shocked at how much beer we’ve sold,” says Stanec. “In the first two days we kicked 18 kegs!” Proof that the surrounding neighborhood has been hungering (and thirsting) for something like Stone’s Throw Tavern.