In & Out But Never Out of Fashion 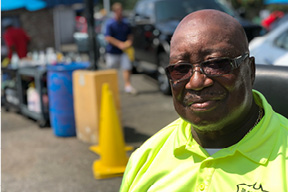 West Ashley has seen a lot of changes over the past 58 years, and every change had to roll by Perry Capers, the longtime manager of In & Out Car Wash at the corner of St. Andrews Boulevard and Wesley Drive.

Capers has worked at In & Out since November of 1960. He came to In & Out as a 19-year-old, one month after it originally opened. And he’s still out there.

He started the same month John F. Kennedy was elected president over Richard Nixon, the last DeSoto rolled off Chrysler’s assembly lines, and the submarine USS George Washington, the first “mobile nuclear base” with 16 nuclear tipped missiles, sailed out of Charleston Harbor.

This day, his parking lot is filled with Mercedes sedans, Land Rover SUVs, Nissans, and the like. His crew, and he’s hired every one of them, is a hodgepodge of white, black, Hispanic, young, and old, male and female.

He’s far from being the only long-tenured employee at In & Out. Back in 2013, there was over a combined 400 years of experience still working for the carwash, in a tough field known for turnover.

“I didn’t hire Nina,” Capers says. She’s got 50 years on the job. Or Carlos; he’s got 49 years. “But I trained all of them.” Because he’s worked all the jobs before a lot of them were born.

Today, he’s training Davis Bryan, the grandson of the original owner, Patrick McGinnis. Bryan, an alum of UNC-Wilmington, is shuttling between crews, spray bottle in hand and wipe rag in pocket.

At 76, Capers isn’t as spry as he used to be. Who is? To get around the parking lot, where the hands-on attention is poured on “getting cars right” after a trip through the washing machine, he has relied for the past few years on a red four-wheeled personal mobility device.

And to make sure everyone will always know exactly where he is, he’s affixed a faded orange flag and stick to the back of his carriage, like the kind kids used to have on the back of their bikes.

The flag bobs above car roofs as he darts between jobs and crews, checking out cars before their horns are honked for final inspection before being handed over to their owners. Don’t get it wrong, Capers still drives his champagne brown Oldsmobile 442 W-30 special edition muscle car on the road.

“What’s the biggest change I’ve seen over the years? It’s got to be the traffic. Jesus. If you had told me back then that there would be bumper-to-bumper traffic every hour of the day, I would have thought you were crazy,” he says.

Customers, he says, haven’t changed, despite 1960 Charleston being very different from 2018 Charleston. “Everyone has always been very polite.”

Some customers were more famous than others. “I remember when James Brown came in. What was he driving? He wasn’t. He was riding in a Cadillac Fleetwood limousine. He had a chauffeur. When it pulled up, woman after woman after woman kept getting out until James Brown go out, checking his hair.”

Some customers have been more infamous. Like the one time Capers’ son found a sizeable bag of “contraband” in the backseat, as well as a significant wad of cash. They passed both back to the owner, who was surprised by the honesty.

“He called back later, saying we’d taken his gun. But I told him to look again, and he said he dug around and found that it had slipped further behind the front seat than he thought.”

Capers himself once found a bank deposit bag sitting on a bench outside the carwash with $18,000 cash in it. He gave it back to a surprised and very relieved customer.

One customer gave a nice reward to an employee who found her wedding band and placed it on the front seat. It had been a family heirloom and had been sincerely missed.

Workers, Capers says, are different these days, if that’s what you want to call them. “Nowadays, when someone gets a job, they don’t want to work. They want to stay home and still get the money.”

Cars have changed big-time, too. He has to special train some of his employees to handle the technology in newer cars.

“The worst car we ever cleaned? Had to be a 1970 Ford Maverick a boy from the Citadel brought in. It was more rust than paint. We had to bring over two trash barrels to handle all the trash in it; he must’ve thought you had to keep all the trash from four years of school in your car.”

Capers is quick to tell you the worst time of year to work at a car wash and the hardest job.

“I always preferred winter over the summer, because you can dress to the weather. You can’t ever get comfortable in the heat.”

“The most grueling job out here is being on vacuum. They see every car. Because of the number of hand crews out front, they don’t see but every sixth or seventh car. Vacuum sees everyone.”

Capers sees himself sticking it out maybe one, maybe two more years. Why?

Got to get the cars right.