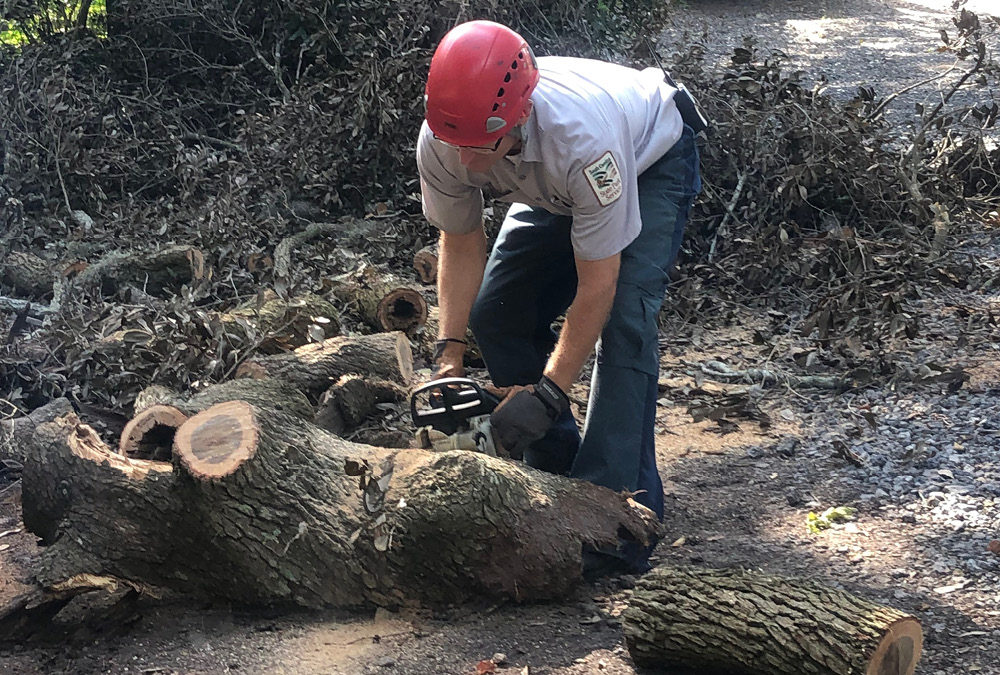 Charleston may have largely dodged a bullet when it came to Hurricane Dorian last month. However, the cleanup effort has been monumental. Weeks after the dangerous storm pummeled the Bahamas and then skirted the South Carolina coast, debris piles still lined neighborhood roads in West Ashley as homeowners continue to deal with downed trees, which damaged their homes and vehicles.

Bradley Adams, co-owner of A&A Insurance on Sam Rittenberg Boulevard, said most of the calls he received following Dorian were for minor property damage.  “As far as claims, most of the calls I got were under their deductible this time — minor shingle loss, a branch on the roof, or a tree down over a fence,” he said. “We had zero flood calls with this storm. Matthew was the exact opposite, lots of flood claims for both houses and cars and no real wind claims.” Adams added that for him the busiest part is leading up to a storm like Dorian, with people trying to get last minute coverage or check to make sure they have the right coverages.

While homeowners across the Lowcountry certainly felt Dorian’s lashings, perhaps the largest impacts, or at least the most noticeable, in West Ashley were at our historic sites. None more than Charles Towne Landing, a state park that consists of 664 acres on a marshy point along the Ashley River. The site of the first Carolina colony sustained major damage last month with at least 96 trees downed and another 150-plus sustaining damage, according to park manager Rob Powell.

Powell says it was by far the worst storm in terms of damage to the state park in several years. The number of trees that fell as a result of the last two or three storms was about 20-25, according to Powell.

“The biggest loss was tree loss. Several really big oaks and pecans came down. Two trees fell on the Bison viewing bridge in the Animal Forest. The bridge railings sustained damage and the fencing sustained damage. The trees have been cut and the bridge repaired,” he said.

The biggest challenge for Powell and his crew was doing the cleanup and repair work without electricity for three days. Dorian hit Charleston the hardest on a Thursday and electricity wasn’t restored at the park until early Sunday afternoon. “It caused many problems from electrical surges when coming back on. We had to have several electrical appliances repaired, had to replace several surge suppressors, and lost frozen retail goods and some frozen animal forest food,” said Powell.

The cleanup effort at CTL has been monumental. “My team is doing a great job! They’re really working hard and taking pride in the way the park looks,” said Powell. “I am really proud of them. We have not hired anyone except for the electrical appliance/freezer repairs.” CTL has had help from Oconee State Park, which sent some people and equipment down to assist in the cleanup. Powell says they also received help from some other state parks in the region.

But being a “forest,” the zoo did sustain a great deal of tree damage and limb debris. “While we were able to reopen the park the following Monday after the storm, we were not able to reopen the Animal Forest fully until Saturday, Sept. 14,” said Powell, who added that the biggest concern for the animals with hurricanes is flooding.

If major flooding is expected, CTL staff takes more precautions and moves the smaller animals to higher ground and when necessary, partner with inland zoos and shelters to evacuate the ones they can. The Animal Forest is designed in such a way that the larger animals that can’t be relocated are exhibited in the least flood prone areas. The only animal that had to be relocated for the storm was Fowler the Bald Eagle. According to Powell, her habitat is marshfront, so CTL staff moves her for every major storm.

“We just ask for patience and understanding while we get the rest of the tree debris cleaned up. All the locals and tourists have been very supportive,” said Powell.

Down Ashley River Road, other historic sites are also dealing with the impact of Hurrican Dorian. Drayton Hall Plantation was hit particularly bad by the storm. “The heavy winds and rains of Dorian left a ruinous impact — felling more than 30 trees across the historic core of the landscape,” said Dr. Carter C. Hudgins, President and Chief Executive Officer at Drayton Hall.

In a letter to Drayton Hall supporters Hudgins asked for assistance in the recovery efforts and to help in future weather disasters. Dorian was the second major weather event to impact the historic site this quarter. In July, Drayton Hall’s facilities were also damaged by a  lightning strike which widely impacted Drayton Hall’s visitor facilities

“Beyond the immediate damage from both storms, there are greater long-term financial repercussions created by storms such as Dorian: Visitation and revenue cease prior to a hurricane due to evacuation orders,” wrote Hudgins. “Preparing a site as large as Drayton Hall to withstand a storm of this magnitude obligates the entire staff to begin protection procedures days before a storm. This is followed by site-wide recovery efforts and the longer-term public perception that the Lowcountry is still recovering and to be avoided even months after a storm event. The result is a massive decline in visitation revenue, which in turn limits the financial resources available to preserve and protect Drayton Hall, its landscape and collections.”

Between immediate recovery efforts, such as tree removal and lost revenue, Hudgins predicted that Hurricane Dorian has immediately cost Drayton Hall $100,000. “Once we shoulder that burden, we need to press forward with increased safeguards ahead of future storms including a much-needed project to secure the roof of the main house and the expanded care of the historic trees and structures which encompass Drayton Hall,” he said.

On the other side of Ashley River Road, Magnolia Plantation and Gardens also saw tremendous damage. According to Kirk R. Brown, National Outreach Coordinator at Magnolia, more than 100 trees came down, including Tupelo, Cypress, Poplar, and Oak. “We had one Ancient Live Oak break apart next to the grand lawn in the back of the house,” said Brown, who said in this instance the damage was more the result of wind over rain, which has been the problem in past storms.

“There was a tremendous amount of debris on the ground — leaf litter, mounds of Spanish Moss, smaller limbs, branches, twigs,” said Brown, but added that the biggest problem was the loss of power for five days and work that either did or did not occur as a result of that. “Refrigerated food was lost. Digital and electronic equipment was unusable in a regular way. Staff was unable to work productively, even if they could get in because Ashley River Road was closed,” he said.