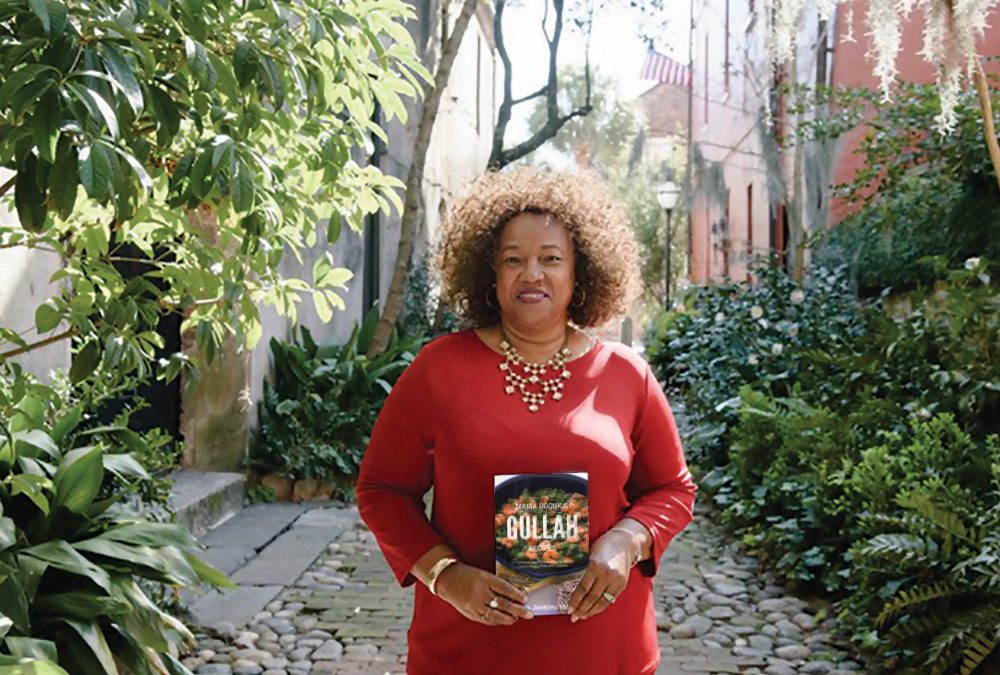 Local historian, artist, and cookbook author Theresa Jenkins Hilliard was born on Edisto Island, where she spent her early childhood under the guardianship of her beloved grandmother, Susan Jenkins, affectionately known as Mama Doonk.

Hilliard developed an interest in cooking when she was still “knee-high to a duck,” watching attentively as her grandmother prepared the family meals. Mama Doonk always involved Hilliard in the preparation of the meals by assigning her to whatever her little hands could do. This was her grandmother’s way of teaching her the traditions of Gullah cooking. Eventually Hilliard began cooking under her grandmother’s watchful eye.

Theresa later moved to the historic Maryville/Ashleyville neighborhood in West Ashley to live with her mother Molly, who moved to Charleston during the Great Migration of the 1940s to work as a cook for a wealthy south of Broad family. Under her mother’s tutelage, Hilliard’s love for cooking continued to grow. Food was always the focal point of every celebration in their family. No matter the occasion, food was a part of it. Theresa always prepared the celebratory meals, which always included Gullah food.

Now, a grandmother of 10 herself, Hilliard has been preparing Gullah cuisine for her family and friends for the past 60 years, using the same tried-and-true recipes that her grandmother, mother, and other relatives taught her. Recently, Hilliard decided to share those recipes with the world and published a cookbook, entitled Mama Doonk’s Gullah Recipes, named after her grandmother. What began as a scrapbook of recipes for her children culminated into a collection of family history and a documentation of classic Gullah cuisine.

The book includes dishes prepared by her grandmother, her mother, and her aunt, as well as some of Theresa’s favorite dishes that she has prepared during the years. You will find her grandmother’s rabbit, opossum, and raccoon stew, shrimp and grits, corn fritters, okra soup, and the secret to mouthwatering homemade biscuits. She also includes her mother’s corn muffins and roast duck, as well as, her Aunt Edna’s squash casserole and easy pound cake.

On Thursday, May 2 Hilliard will speak in the Pavilion at Middleton Place about her mission to preserve Gullah-Geeche culture through food and language. Her talk will include personal stories from her life growing up and the importance of preserving both the language and foodways so that they are not forgotten by future generations.

Hilliard is a recipient of President Barrack Obama’s Drum Major for Volunteer Award, a docent at the Old Slave Mart & Museum, a Gullah storyteller, lecturer and certified Charleston tour guide. She received her bachelor of arts degree from Southern Illinois University and is a retired Equal Employment Opportunity and Diversity Manager. She has 10 grandchildren.

Hilliard’s ancestors were all great cooks. This book gives you a glimpse of history when food was from the land, sea, woods, fields, and trees, long before all of the modern conveniences of “store-bought” food. Gullah-Geechie food was literally from the field to the plate long before it became popular. Hilliard also includes some antidotes that will make you chuckle as you take a step back in time with her.

This book will jog the memory of some and give others a peek into the past. “Hunna en had good eatin’ ‘til ya’ grease ya’ mouf’ wid Gullah food.” (You all haven’t had good eating until you’ve eaten Gullah food).

Theresa’s descendants were members of a distinctive group of people known as Gullah-Geechee. Theresa stands on the wings of three very special women whose teachings have made a significant impact on her life. This book is dedicated to her beloved grandmother, Mama Doonk, her most treasured mother Molly and her dear aunt, Edna. Their recipes will live on forever between these pages.