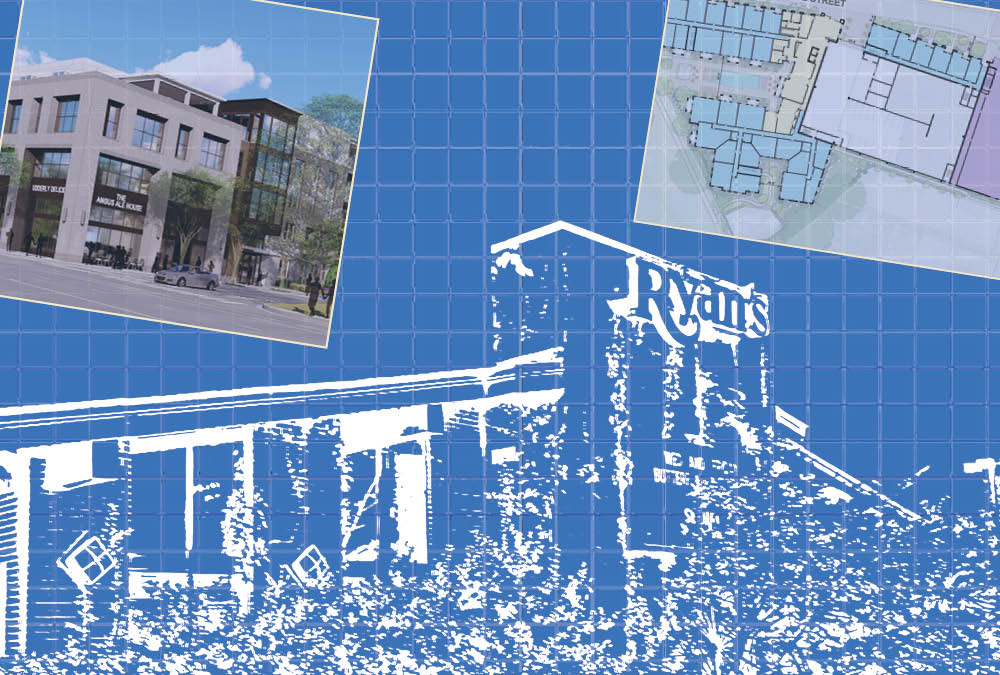 A key strip of St. Andrews Boulevard is about to undergo major changes that could deeply impact the livability of neighborhoods that surround it, traffic flowing into and out of the area, and the future revitalization of West Ashley.

For years, the northeast corner of the intersection of Sycamore Drive and St. Andrews Boulevard has been home to dead and underutilized buildings.

A former grocery store has become a boat storage parking lot. A gas station has morphed into a used car lot. And the former Ryan’s steakhouse and buffeteria has been locked up with vines crawling up it.

While a pharmacy has managed stay open, even Jersey Mike’s has moved out for a more vibrant shopping center.

All that is about to change.

Last month, the city’s Design and Review Board (DRB) gave “conceptual approval” to Gramling Brothers, a downtown real estate and development company, to build a massive mixed-use development where the Ryan’s currently stands.

The multi-million-dollar project at 829 St. Andrews would include:

• A swimming pool, and

Mikell Harper, lead manager on the project says there is still “a lot of runway before we get to a point where we can build anything.”

Harper praises the site’s proximity to downtown, opportunity for multi-modal transportation, and that it abuts the city’s Ackerman Park, with its soccer fields, dog park, and skate park. The park also hosts a regular farmers market in the warmer months.

Being so close to the Bikeway and the Greenway, Harper says he hopes residents will tap into alternatives to taking their cars everywhere and hopes a bus stop will be erected nearby.

Harper confirms that the development, as it is currently drawn up, will start at two stories at street level, and climb to five stories toward the back. The buildings above three stories will require elevators.

Locals howled the last time a building of this size was built on St. Andrews, with the ExtraSpace Storage building across the street and down a half-block. The building was criticized for being too large, too tall, and out of place on a strip more known for small houses converted into small businesses.

Eric Pohlman, the West Ashley projects manager for the city’s planning and sustainability department, stresses that the storage facility was located within a donut hole in the county and outside the city’s control.

Pohlman also says that the public will have multiple chances to weigh-in on the project as it winds its way through the DRB and planning commission’s approval processes.

This may come as welcome news to some in the Avondale Neighborhood, which the proposed development borders and may hulk over. Already, residents have had to post “no parking” signs to deter diners at Mex1 Cantina from leaving their cars in their yards. (Mex1 has increased its parking area, though.)

One resident has championed “dead-ending” one of the streets feeding out into the boulevard to keep out traffic.

Pohlman acknowledges the scale difference between the highly successful, one and two-story Avondale Point shoppes along Savannah Highway, and the proposed plan at 829 St. Andrews on the other side of the neighborhood.

But Pohlman says the city “still prefers the Avondale style development” as the model for revitalizing West Ashley. Unfortunately, infrastructure improvements sometimes push developers to bigger buildings to protect their return on investment, he says.

Kenneth Marolda lives right around the corner from the proposed project and is optimistic that 829 St. Andrews will enhance his neighborhood while not impacting it too badly.

On top of being the president of the Avondale Neighborhood Association, Marolda is a real estate professional who holds several graduate certificates in urban and community planning from the College of Charleston, as well as one from Clemson in historic preservation.

He has also sat in on many DRB meetings about the project and met with Harper from Gramling Brothers.

“Generally, most people have been pretty happy with any improvement of the shopping center since the Ryan’s went out,” says Marolda, especially older people in the area who want to see something go in there to make the park feel safer to use.

Marolda says it has been explained to him that this project is just the first step of Gramling Brothers’ plan to rehab the entire shopping center.

That plan would include razing the former grocery store building, building a new building closer to the boulevard, and further ringing the park with apartments and commercial buildings.

Then, Marolda foresees a near future where the other three corners of the Sycamore-St. Andrews Boulevard further developing due to market forces.

The city’s Pohlman says “that’s not always a guarantee, but typically redevelopment follows redevelopment.” Pohlman adds that when it does follow, it’s not always at the same scale as evidenced by recent big buildings going up in Mt. Pleasant leading to reinvestment in smaller sites nearby.

A lot of recent redevelopment has already preceded the proposed project along the other side of the boulevard, including the Harbor Spirits package store getting a facelift; the conversion of the soon-to-open Turbo Cone building next door to it as soft-serve ice cream parlor; the construction of the 10,000-square-foot Shelbourne Square medical facility a block short of Sycamore; the even bigger 1014 building anchored by a Doctors Care walk-in clinic and a fitness studio further up the boulevard.

“I personally do believe that 829 St. Andrews is a site for density, which is needed in city and in West Ashley, and that this is the time and the place” says Marolda.

“This is an appropriate use, but it has to be done in a way to minimize the impact to what is around it – make it an asset to the neighborhoods and not a burden,” he says.

Marsha Higgins isn’t so sure.

As president of the historic Ashleyville-Maryville Neighborhood, she is already very concerned about how dangerous the Sycamore-St. Andrews ntersection already is, much less how it will be when more than 1,500 daily car trips are added to it.

“The unsafe intersection at St. Andrews Blvd. and Sycamore Avenue is a long-term problem and one which we have been asking for help and changes for many years,” she says.

Coupled with the 42 high-end homes recently built by another developer in the midst of her working-class neighborhood, Higgins worries that “the plan for the development of 235 apartments at 829 St. Andrews Blvd. will make it very difficult and very unsafe to enter and exit Ashleyville.”

Higgins is looking forward to the city completing a transportation study of the project.

So is Katie Zimmerman, the executive director of Charleston Moves, a local bike-friendly transportation watchdog. Zimmerman lives within shouting distance of the project and is pushing for wider sidewalks for both bikes and pedestrians to be able to enjoy.

Zimmerman has been pushing both the city and county to improve connectivity along the Bikeway’s path crossing the boulevard and sees a way forward that would link the project with a multi-use path leading to the Bikeway, which would lead to the Greenway and onto the yet-to-be constructed Ashley River bike and pedestrian bridge, linking the project and the peninsula by foot and bike.

She says getting this project right, and the intersections that serve it is crucial.

“This will be an example of redevelopment going forward; we can’t cut corners,” says Zimmerman.

Charleston County is already underway with traffic signal design for the Sycamore-St. Andrews intersection, according to County Councilman Moody.

Moody has been told by staffers that the county is working to obtain the right of way at two of the property corners at the intersection and has set aside $250,000 to improve the intersection’s safety. Those improvements include a bike/pedestrian video detection system, better poles, restriping, and high visibility crosswalks.

City Councilman Peter Shahid, whose district ends on the other side of the boulevard, says the project has already had to go through the DRB four different times. He also says issues like increased stormwater and traffic increases must be designed around before shovel splits dirt.

Shahid heads the West Ashely Revitalization Commission, the WARC, which crafted and got passed Plan West Ashley. That plan identified this strip of St. Andrews as a key corridor in need of revitalization.

“But while we must stay true to the central plan, we also cannot be upsetting the character of the neighborhoods,” says Shahid. “We want to get this right.”