Having Her Cake and Eating it Too 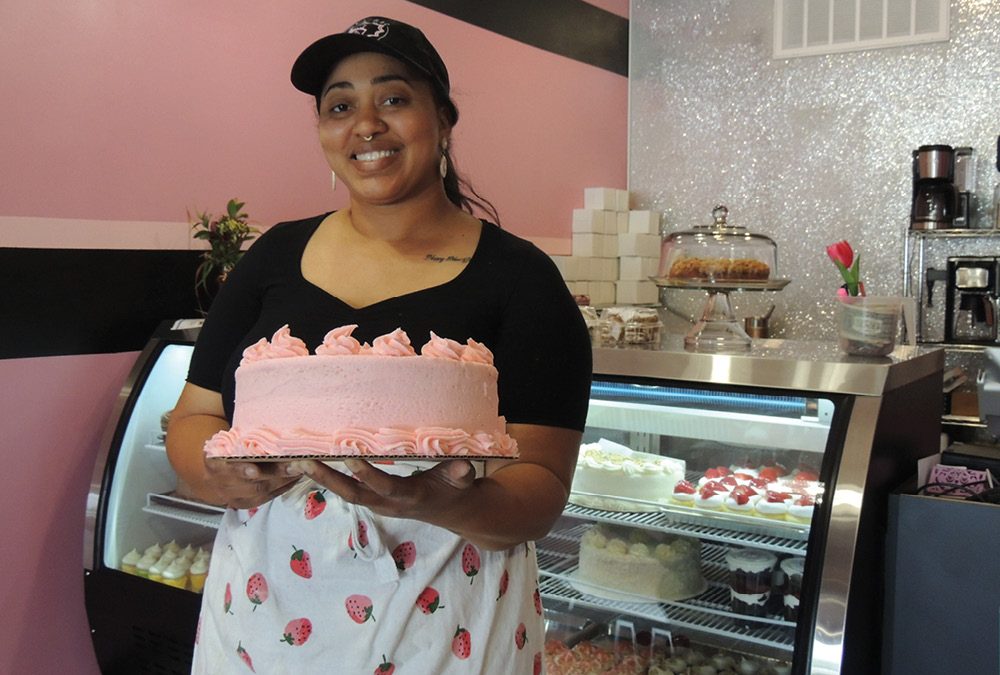 Just a couple of months ago Alexis Fussell was running a successful custom cake company out of her home. With a traditional residential oven, the former cosmetologist-turned-baker was cranking out some Cake Boss-quality creations from her home kitchen. Now she is the “cake boss” as owner of West Ashley’s newest bakery, Cake Bar by Alexis on Old Towne Road.

When most people open a business, they’re workload and hours increase, but in the case of Fussell, she’s experiencing just the opposite. That’s largely because she went from being able to only do one cake at a time in her oven to having a proper commercial-sized oven. “It’s a blessing to be able to bake four cakes at one time, she says.

Cake Bar also allowed Fussell to shift the focus of her business from exclusively doing time-intensive custom cakes for birthdays, weddings, baby showers, graduations, etc. to splitting that time and focusing on baked goods for the shop, like whole cakes, cupcakes, and cake pops which she can churn out quicker.

Since opening her doors just a few weeks ago, Fussell says business has been booming. It helps that she has already built a great network of customers. Her Facebook page has more than 4,500 followers, not too bad for a company that literally just opened their doors. But despite her instant success,

Fussell makes a point to leave at a reasonable hour, where she used to stay up all night baking and waiting for the next cake to come out of the oven, waiting for it to cool, and then decorating it.

“It’s very satisfying to see it all come together,” says Fussell. “And to have the support of the neighborhood has been great.” She says that everyday people walk into Cake Bar to thank her for opening something like it on that side of town.

According to Fussell, she had to renovated the space entirely, morphasizing an old scooter sales and repair shop into a bright and happy bakery, complete with a glitter wall behind the glass display case in the back of the bakery. The other walls are painted pink and black like Cake Bar’s logo. “That’s who I am. I’m pink. I’m glitter. And I’m black.” she says laughing.

Fussell’s longtime spouse and taste-tester, whom she calls a 450-pound teddy bear, saw how hard she was working every night and encouraged her to take her operation out of their home and open a brick and mortar business. “No one else understands the time it takes. The literal blood, sweet, and tears that went into this,” she says.

Cake Bar by Alexis is a dream-come-true for Fussell, who first began baking on an Easy Bake Oven when she was a kid. She giggles recalling that her mom would have to buy her a new one every year for Christmas because she would use it until it wouldn’t work anymore. As she got older her hobby of baking turned into a passion after her second son was born.

Fussell left the salon she worked as a hair stylist and became a stay-at-home mom. She says that she ending up spending countless hours watching baking shows on TV and decided that she could do what they were doing. She says there are some similarities in doing someone’s hair and decorating someone’s cake. “I think the creative comes from same place,” says Fussell, who also knows that a nice cake can do as much for a party as a good haircut can do for someone’s overall appearance.

“People don’t understand how important your cake is, but it’s the first thing people see when they walk into your party,” says Fussell who began baking at every family function and dinner party. Eventually she began taking custom orders from friends and family members. She admits that at first she was in a little over her head, having to go and Google techniques and watch YouTube videos on how to execute it. Fake it and bake it until you make it. And she did just that, honing her baking and decorating skills over the years until she was cranking out creations that Duff Goldman would be proud of.

Nearly a decade later and it has become second nature for Fussell who enjoys the challenge that comes with fulfilling a request and then going beyond the person’s expectations. And the cakes are every bit as delicious as they are stunning. Some of Fussell’s specialties are a strawberry lemonade cake, a strawberry crunch cake, and a banana pudding cake.

Cake Bar by Alexis also hosts children’s parties at the bakery where up to 10 kids can come in and decorate their own mini pizzas and their own four-pack of cupcakes, which they can take home in addition to the 8-inch cake to be eaten on site. This month Cake Bar will also start offering decorating classes.