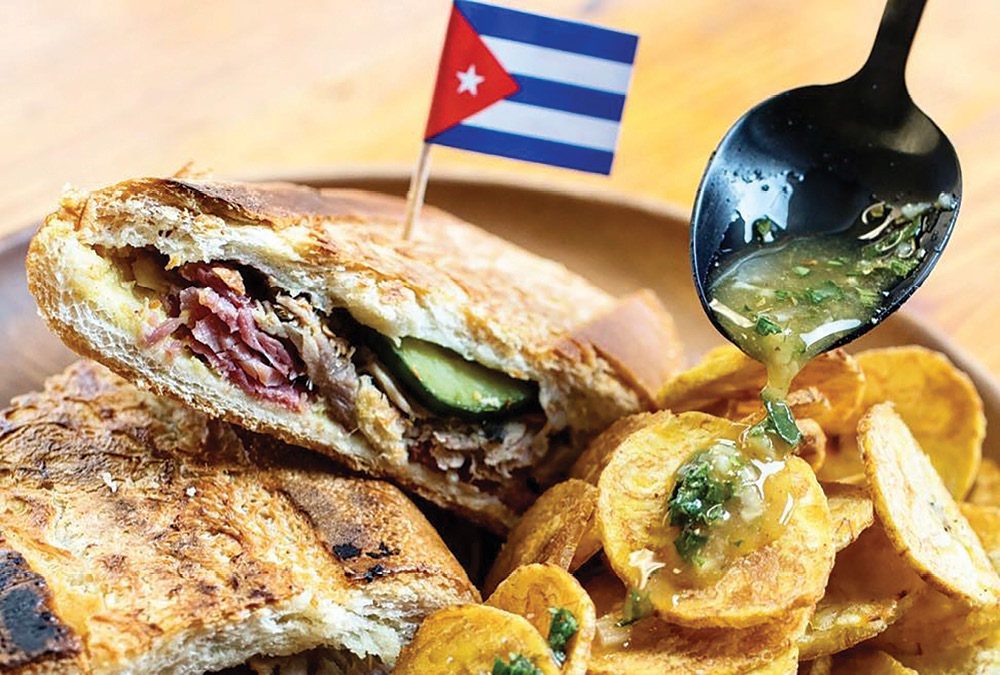 One of West Ashley’s most anticipated restaurant openings in years happened last month when Spanglish Cocina + Bar finally opened its doors along St. Andrew’s Boulevard in the building previously occupied by Blue Rose Café. In less than two years, owners Tomas and Lynda Prado have taken Spanglish from concept to concrete … or brick and mortar.

Before Spanglish had a physical location to call its own, it was first introduced to Charleston as part of The Workshop, which serves as kind of a rotating test kitchen for new restaurant concepts in downtown Charleston. After a six-month stint at the experimental food court, the Prados began aggressively looking for a permanent home for their eatery. But folks who had already developed a taste for their fresh take on Cuban-American fare couldn’t wait. And so for the last year, Spanglish existed as a pop-up, showing up regularly around town at spots like The Daily and Palmetto Brewery downtown and in West Ashley at Charlestowne Fermentory and Craft Conundrum, which closed earlier this year.

When the Bluerose Café space became available, Lynda Prado knew they had found a home for their restaurant. “We loved the idea of coming to West Ashley. Not only is it a wonderful location, but we wanted to be a part of the neighborhood,” she says, who appreciates the history of the building and the loyal customer base that the original Bluerose Café had built within the community. She hopes Spanglish will establish a similar place in the hearts of the West Ashley community.

“So far it’s been incredible. More than I expected. Just in the first couple weeks, we’ve had quite a few regulars who have come in numerous times,” says Lynda. With the sleek Miami-inspired neon vibe, the inside of the building looks completely different than Bluerose. However patrons might see a couple glimpses of the old Irish café. For one, the shamrocks that were etched into the patio remain. “I wanted to keep that because there’s a little history that comes with the neighborhood,” says Lynda. “We wanted to honor that. But at the same time we want to offer something fresh and new.”

While Spanglish might be a big deviation from the building’s former tenant, Lynda hopes Bluerose patrons will give Spanglish a chance. “What we’re doing is approachable because the food is very approachable. I like to say ‘it’s a warm culinary hug,’” she says. “The concept is a Cuban-American concept. We’re keeping the traditional Cuban flavors and giving it a modern twist. But it is NOT fusion.”

Less than a month since officially opening, the response has been incredible, according to Lynda. She says when they first opened their doors they were selling out of food almost nightly and there were often hours-long waits. But she recognizes that these are “good problems” for any new business and says that they are finding their groove and is grateful for the community’s response.

Currently open Tuesday through Saturday for dinner service only, Lynda says there are plans for Spanglish to open for lunch in the very near future and adds that brunch is also in the cards. Also, she says they’re applied and are currently awaiting a liquor license. But for the time being, Lynda encourages patrons to bring your own bottle of wine or favorite beer. But she also points out that Spanglish offers some seriously delicious mocktails, too.

As far as the food goes, Lynda says some of the favorites so far have been the beef empanads and the Cuban sandwich, which includes slow-roasted pork, country ham, house pickles, house mustard, aged Alpine cheese, served on authentic Cuban bread. Another popular entrée has been Spanglish’s take on Ropa Vieja, known as the “national dish of Cuba.” The Spanglish version includes braised all-natural Angus flank steak, tomatoes, peppers, capers, and parsley.

Both Lynda and Tomas were born and raised in South Florida by Cuban families. Lynda was born in Miami and Tomas was born in Hialeah, just north of Miami. This comes through not only in the cuisine that Tomas creates, but in Lynda’s creative vision for the interior design of Spanglish. The aesthetic is simple— minimal, Miami inspired, casually cool with lots of pink and neon.

In his culinary career, Tomas has worked alongside some of the world’s most renowned Chefs including Daniel Boulud, Jose Andres, Sam Gorenstein and most recently has worked as the chef at Andrew Carmellini’s wildly popular rooftop restaurant and lounge “Westlight” in Brooklyn, New York. Lynda comes with an extensive background in hospitality and human resources. And she also brings most of the sweet offerings at Spanglish, such as her famed “2nd best flan” and her mother’s Cuban rice pudding.

Asked if her flan is second best, who holds the top spot, she credits Tomas’ mother. “His mother gave me the recipe for flan,”. “I’m able to replicate it very ,very, very close to what she makes,” says Lynda. “The best compliments I’ve got is when people say it reminds them of their grandmother the way she used to make hers.”