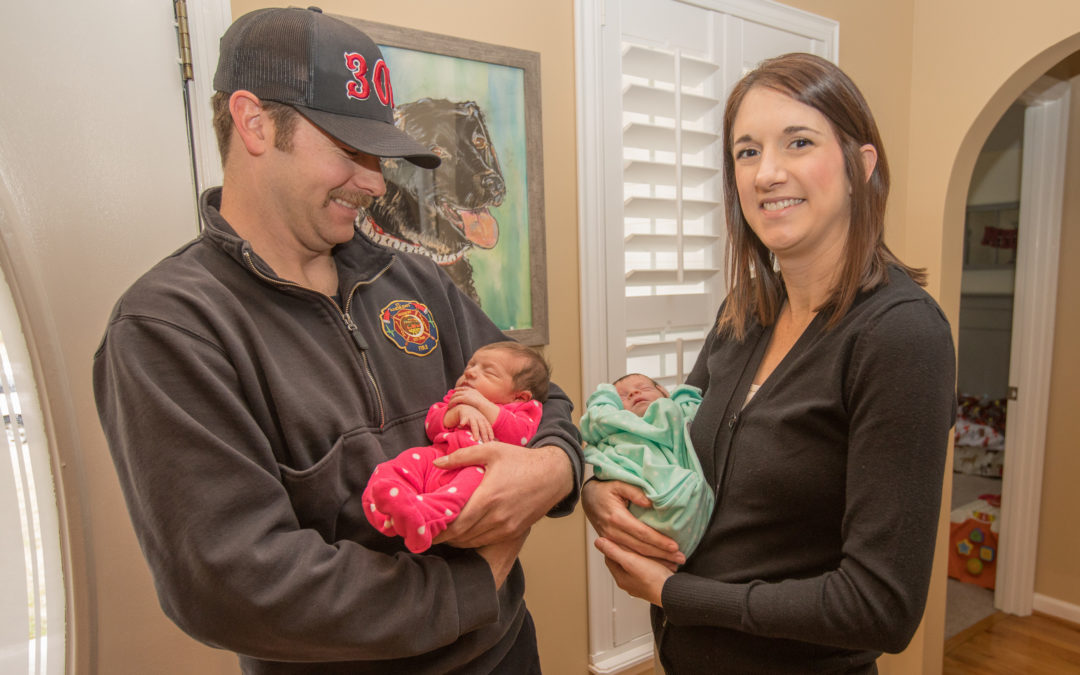 As a nurse, Jordan Prosser is no rookie when it comes to blood, birth, and the many mysteries of the human body. But early last month, she was surprised how fast her contractions were coming.

Pregnant with twins, Prosser had met with her obstetrician earlier that day. The plan was to deliver her second and third children a few days later, via a cesarean section to take advantage of timing her days off from the VA hospital downtown.

So, she returned to her Sylvan Shores home behind the Kia dealership. Nothing to worry about. Besides, her condition had been unchanged for a few days.

But when she got home and put her very young son to bed that night, Prosser says she began to experience what she thought were Braxton Hicks contractions. Those contractions are not as intense as “real” labor contractions and serve as sort of a “pre-tremor” for the big show.

“The contractions were not super painful, and I thought I was just having more Braxton Hicks, but I wasn’t dying,” says Prosser. “I thought I had just exhausted myself putting my son to bed and they would slow down.”

The contractions were coming every 30 minutes, and her doctor had said to call her once they were five minutes apart.

“I started timing them … 13 minutes … 11 minutes … 7 minutes apart,” she says. That’s when she told her accountant husband to pack her bags and that it was go-time.

Prosser texted her mom to come over to watch her son, and she then called the doctor who told her to come in.

“I was getting a few things packed in case and suddenly started getting extremely powerful contractions and experienced a lot of pressure,” she says. “I went to the bathroom, had another contraction, and then came a strong urge to push.”

Prosser reached back and felt her daughter’s head. Her training and experiences told her the baby was crowning. “It was then that I told my husband to call 911; I had not realized how quickly things had escalated,” she says.

One more contraction and her water broke. Prosser got on the bathroom floor.

A few minutes later, two county EMS and two St. Andrews PSD firefighters arrived. And then her mom, who drove past the emergency vehicles out front. “And I’m screaming, bless her.”

Soon after, her daughter Elizabeth emerged fully, and was wrapped in a pink towel. “The good news was she was out; the bad news was there was still one in there,” says Prosser. And he was situated transverse, or east-west instead of north-south.

The responders got a lift sheet to carry Prosser out of the bathroom and onto a stretcher. When Prosser looked back, one of the EMS workers was holding her newborn “like a proud papa.”

Prosser doesn’t know who cleaned up the bathroom, but she suspects it was the firemen. “It was nice not to come home to a scene from ‘Saving Private Ryan,’” she says.

All four responders ended up going to Roper St. Francis for paperwork reasons, and to make sure Prosser’s son, Luke, came out fine. He did.

While at the hospital birthing wing, the two paramedics offered up their names jokingly to the parents.

It was paramedic Katie Cary’s first delivery, she said during her vacation last month while on a ride to go snorkeling in Hawaii.

“We get to go to strangers’ homes all the time and be there for people in their worst moments and take care of somebody, and hopefully there’s a positive outcome,” says Cary, who grew up in Kentucky.

“This time was exciting, not awkward, it was what we train for in school, and then it happens,” she says. Cary adds that having been there for Eliza’s arrival has done nothing to change her own plans to have children “Just … maybe I’ll live closer to a hospital.”