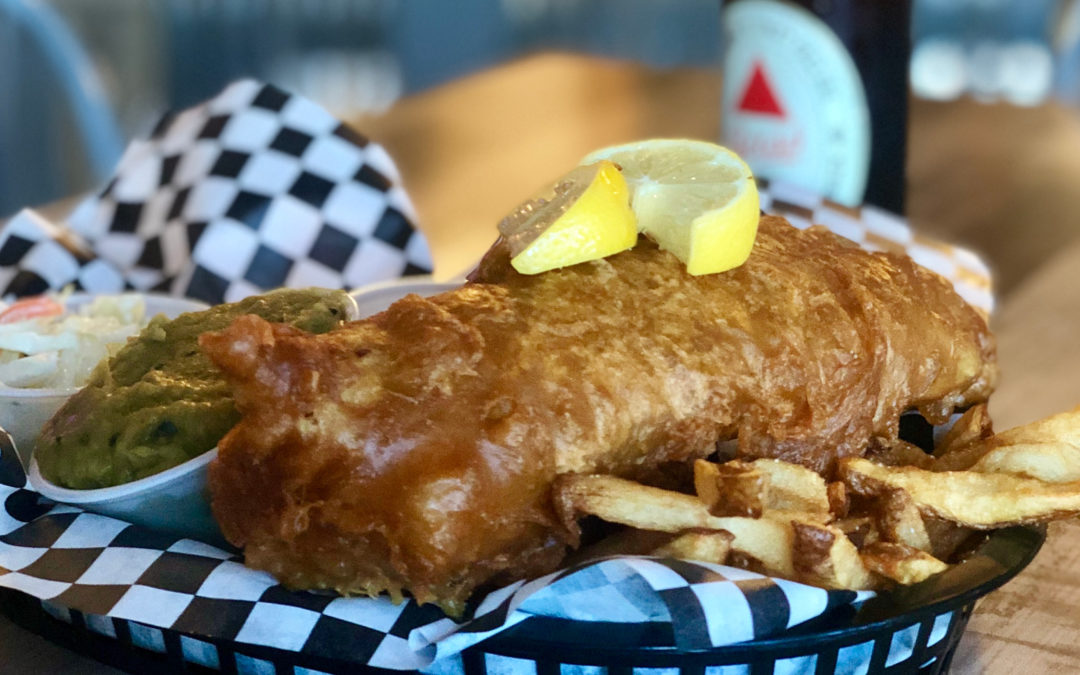 Across the pond a “chippy” is slang for a fish-and-chip shop. In America, the term is often used to describe someone or something that is feisty or scrappy. A Salt N Battered, West Ashley’s newest seafood restaurant, fits both definitions. A scrappy fish with a black eye serves as the logo for the small eatery, located at 1303 Ashley River Road, located next to Taco Spot.

Owners Teresa Zubrowski and Mark Gilbert have completely renovated the space, which had been home to an array of Asian restaurants, including Joy Luck China, Sakura Japanese, and most recently Thai Spice. Inside, A Salt N Battered is nearly unrecognizable from its predecessors with trendy light fixtures and a shiny, new L-shaped hardwood bar in addition to the high-top and low-top tables in the dining room.

The no frills restaurant and bar, doesn’t try and get fancy with an elaborate menu with loads of options. This shouldn’t come as a surprise, as it’s marked clearly on the outside of the building, “A Salt and Battered: A Fish Fry Co.” And that’s exactly what they do. They fry fish. The menu consists of two main options: a half order or a full order. The golden-fried pieces of fresh, never-frozen cod are sliced thick and served with coleslaw and hand-cut fries (or chips, as they’re known in England. They also call cookies biscuits, but that’s a whole other story).

“We don’t want to put anything in the cooler. We make it fresh everyday,” says Zubrowski. Even the tarter sauce is homemade, as is nearly everything at A Salt N Battered, something Zubrowski takes pride in.

“I wanted to make sure that what we do was ours. The batter is our batter. Our mushy peas our mushy peas,” says Zubrowski, who admits she doesn’t particularly like the popular bright green British side, but that patrons have told her they’re the best in town.

In order to create a simple menu that was both authentic enough to please the staunchest fish-and-chips purest, yet unique enough to stand out, Zubrowski says she flew a chef friend in from out of town to help create the proprietary recipes for A Salt N Battered.

Now OK, for the purists out there, Zubrowski realizes that A Salt N Battered’s “chips” aren’t the thick steak fries you would typically find in England. But she says they’re hand-cut every morning with the skin left on because that’s how she likes them. Sure it’s more of an artisan American-style French fry than a standard British chip, but hey, this is West Ashley, not West Ham. Let’s not start another revolution over it. No one will judge you if you douse your fries/chips in malt vinegar or dip them in ketchup or slather them in HP Sauce (HP stands for “House of Parliament). A Salt N Battered has all of the above. You can even ask for a side of their own homemade brown sauce, or “chippy sauce” if you prefer.

According to Zubrowski, she plans to add food specials from time-to-time, such as fried shrimp or chicken wings for Super Bowl Sunday. “We’ll always stay true to our concept, but still offer people a little something else in case they’re sick of eating fish-and-chips,” she says.

Currently offering wine and local craft beers, as well as a couple British classics, such as Bass Ale, Zubrowski says they will have a full bar any day, once they’re liquor license gets approved. When that happens she says they plan on offering nightlife entertainment, such as music, trivia, and karaoke. While this is the first foray into the restaurant business for Zubrowski and Gilbert, the business partners have two other West Ashley-based companies, including accounting firm Breakthrough Financial Services as well as a real estate management company. But that doesn’t mean that they’re complete strangers to the food and beverage world. Zubrowski worked in the business, mostly in the front of the house, for seven years and was the CPA for a major restaurant group downtown for a stint.

“It wasn’t that I didn’t like public accounting, it was that I didn’t like who I worked for,” says Zubrowski. “I’m the type of person who will not be employed by someone.” She and Gilbert eventually became business partners and she now serves as Chief Operations Officer for the accounting firm.

According to Zubrowski, she and Gilbert have both always wanted to own a bar/restaurant and when the Thai Spice space came available late last year, it seemed like the perfect opportunity. At the restaurant, she’s the more hands-on partner and handled the design and layout of the restaurant.

Gilbert, whose father is from England, was actually the one who came up with the concept. Zubrowski immediately loved the idea, knowing it would fill a niche in this part of town. “We both live in West Ashley and both of our businesses are in West Ashley. We don’t leave West Ashley,” says Zubrowski. “If you want a burger, you can get it anywhere. If you want tacos, you can go right next door (at Taco Spot). But if you want fish-and-chips, you’re going to have to drive,” she says. Not anymore, now that West Ashley now has its very own chippy.