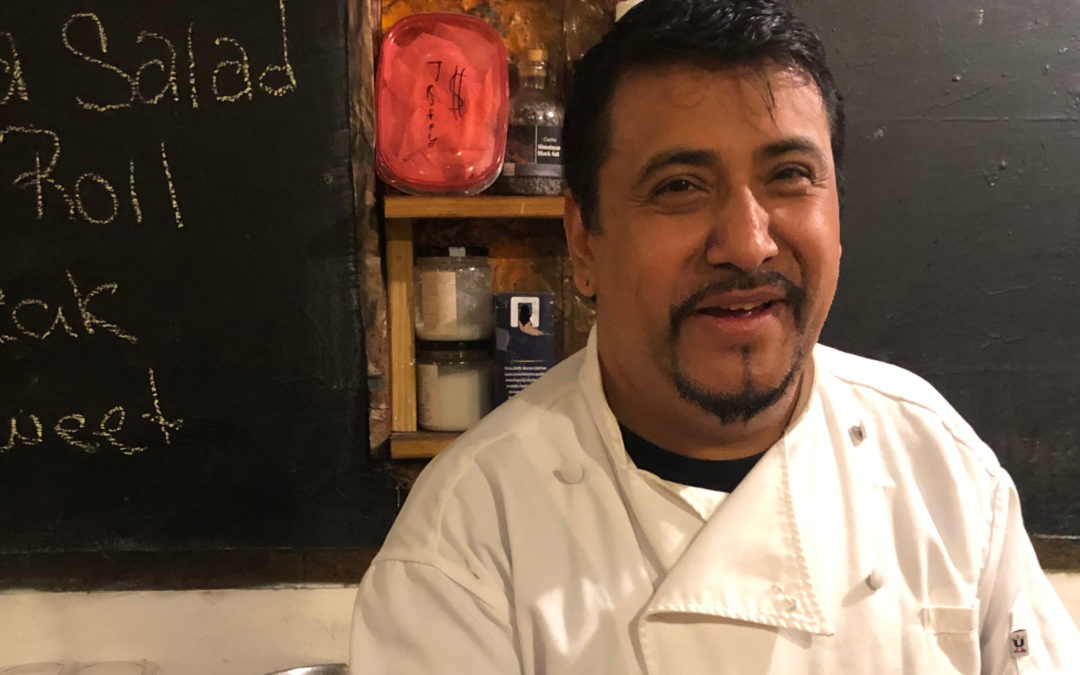 By design R Kitchen is a bit of a mystery. When is it open? Is it actually open? How do I get in? What’s on the menu? What does it cost? These are all typical questions diners may ask when going out to eat. But this isn’t your typical restaurant. In fact, it’s not a restaurant at all. It’s a kitchen. This, according to the website, www.rutledgekitchen.com.

The website also answers another mystery. What does R stand for? R stands for Rutledge, the street that is home to its original location in downtown Charleston. The West Ashley location opened a couple years ago at 1337 Ashley River Road in the space formerly occupied by Livelihood Café.

You might also say that R also stands for Raul, as in Raul Sanchez, the inventive culinary mind behind the now defunct Raul’s Taqueria & Mexican Grill on Rivers Avenue and Raul’s Maya Del Sol in Park Circle. He has now set up residence in the West Ashley location of R Kitchen, where he creates innovative five-course meals five days a week.

For Sanchez, it’s a dream situation. He has autonomy and creative freedom to do what he wants as a chef with none of the headaches and stress of actually owning a restaurant. Those headaches are something Sanchez knows all to well. He grew up in the business. His family owned Mexican restaurants in his hometown of Chicago. And he tried his hand at being a restaurateur … twice.  And while for various reasons neither Raul’s Taqueria & or Maya del Sol panned out, Sanchez successfully built a following in Charleston.

One of those customers was Ross Webb, a fellow chef who respected Sanchez’s authentic yet innovative take on Mexican cuisine. Webb was already having great success with R Kitchen downtown and was about to open R Kitchen West and felt Sanchez would be a great fit for the 20-seat, chef-friendly concept.

“Ross was a customer and when he found out I was closing (Maya del Sol) he came and extended an offer to me I couldn’t believe,” recalls Sanchez. “He said ‘why don’t you come to the Kitchen, there’s going to be two. I’m going to open up West Ashley very soon.’ I was like ‘Ross you don’t know me. You’ve eaten my food, but you don’t know me … I was overwhelmed. I was speechless.”

It’s been over two years and Sanchez is still in awe over how it worked out. “It’s such a unique situation for me because all of the people in town who like my food can still have it, but I’m not killing myself anymore. I have most of the morning off, I don’t come in until 1 p.m. I work five days a week. I have a life,” says Sanchez. “That’s unheard of. Chefs don’t have a life.  But (Webb) has created something really unique here and I’m really spoiled.”

Sanchez explains that with the R Kitchen concept, Webb has created a restaurant that is centered around the chef. Because there are only 20 seats at R Kitchen, the chefs also serve the food while interacting with the guests. Because there are no other employees and the overhead is low, the cost for a delicious five-course meal is surprisingly affordable. For $35 you have a prix fixe menu that changes every night, with the option to have wine pairings or you can BYOB.

Part of the fun of R Kitchen is not knowing for sure what you’re going to eat until you arrive at R Kitchen West. The only way to get in is to make reservations by phone and often they are booked out weeks in advance.

While Sanchez is best known around town for his Mexican-inspired cuisine, don’t expect a traditional Mexican meal when he’s in the kitchen. He says a lot of his techniques are rooted in Mexican cuisine, but he enjoys branching out and serving different things. In fact, Sanchez says he moved to Charleston from Chicago 10 years ago with the intention of opening an Italian restaurant.

“Italian food and cooking is my passion. But after moving to Charleston and eating the Mexican food here, I thought ‘Oh my God, I need some real Mexican food. So I opened a Mexican restaurant,” he says.

“When it comes to Mexican and Italian there are a lot of similarities — through food and culture, and lifestyle,” says Sanchez. “I see a lot of Italian grandmas slave in the kitchen all day Sunday to have that Sunday dinner. My grandmother and my mother did the same thing. They would spend all day, sometimes days, for that one meal. And that itself is the basis to the start of it all. And it’s the same in Italian and Mexican.

“Obviously, I dabble in everything. I love doing a little Japanese and Korean and everything, but I always refer back to the Italian and Mexican because they’re so close to each other. Even the flags are the same colors, except one has the eagle and the other one doesn’t,” says Sanchez. “There’s a lot of similarities, but what I always try to do is just make it flavorful.”

R Kitchen West is open Tuesday-Saturday by reservation only. It is located at 1337 Ashley River Road. For more information or to make a reservation, call (843) 789-4342 or visit www.rutledgekitchen.com.