Cooking Up Something Special 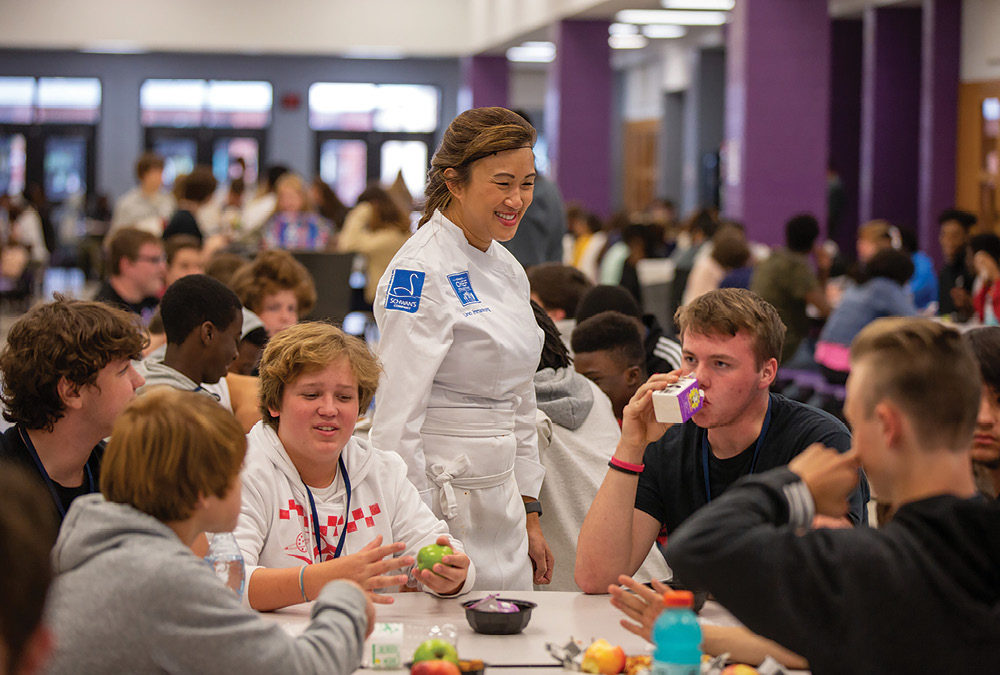 Last month, West Ashley High School threw open the doors to its ovens and pantry to welcome a coterie of famous and successful chefs to its kitchen.

But it was the fourth chef that came along, Uno Immanivong, a relative newcomer to the cuisine world, whose recipes won out.

The four chefs were tasked with coming up with two entrees each for a competition that would be selected by the kids. Meeting for two days with the kids in the marketing, culinary, and other departments, the chefs all submitted their recipe ideas for a vote.

And Immanivong’s two recipes took first and second place: taco pizza and whole-wheat spicy chicken lo mein with an oven-fried veggie egg roll. Not bad for a former mortgage banker who just got into the cooking game less than 10 years ago.

In that relatively short time, Immanivong, had put together a chain of successful restaurants in the Houston area, sold it, started another, opened three more restaurants and began her own line of foods before joining Schwan’s.

Sophomore Eliana got the pizza, but passed on the taco toppings bar poised outside the lunch line. “It’s pretty good … it’s certainly better than our regular school pizza,” she says of the cheddar cheese and Mexican-spice ground beef. “There’s already enough on the pizza.”

Her classmate Jolie got the noodle dish. “The noodles are little bit soft,” she says, adding that’s understandable since they were feeding 1,200 students that day.

Immanivong, says what she heard over and over from the students was that they wanted a variety of healthy foods, with a focus on vegetables and ethnic food.

A first generation Laotian American, Immanivong says she had to remember that for many of the kids noshing her noodles, exposure to Asian foods doesn’t extend past a trip to Panda Express. That meant that what works in her high-zoot Mex-Asian fusion joints might not fly completely on the linoleum covered cafeteria.

Immanivong, who was mentored by celebrity chef Anthony Bourdain before his death, insists that she learned a lot, too, during her three-day sojourn to WAHS: “These kids are the next wave. I’ve got to know what they want to eat from a business perspective. These kids are a litmus test of what’s coming down the pike.”

WAHS culinary department head Jason Wheless said the students in his kitchens learned a lot about what it really takes to work and succeed in the cooking world. Wheless, whose program recently topped the state in regional competitions, likes that the chefs didn’t pull any punches about the “real world” when his kids asked them tough questions.

Thankfully, he says, they were more focused on how to establish a career versus what it was like being on television, he says.

Which recipe reigned supreme this day? Was it the lo mein or the taco pizza?

It was the lo mein. Kids liked its back-of-the-throat tickle the extra spice brought, giving it higher ratings and picking up nearly twice as much of it as they did the pizza.

Overall, about 500 more kids than usual bought their lunch that day, showing that if its good food, and not just “good for cafeteria food,” the next generation will eat it.