Buzzing Around West of the Ashley

Revisiting the second oldest subdivision West of the Ashley

In the ongoing discussion about the name we use for our section of Charleston, Cele insisted that “West of the Ashley” was the proper term, not “West Ashley.” Many still insist on St Andrew’s Parish. The discussion continues on this subject.

Did you attend Mrs. Till’s kindergarten on Riverdale in Avondale? was one of the questions posed in the January 2020 West Ashley Flashback.

Ten years ago Cele (nee-Kearse) Montgomery had teased me with a little information when we sat for an interview with her long-term friend Anna (nee-Wireman) McAllister. Both ladies were featured in the subsequent publication West Ashley (Arcadia Publishing, 2012). The question prompted an email with the subsequent phone call providing some fun stories.

The story begins with a paved driveway and how this unique residential feature was the catalyst for Mrs. Wallace Till to start her kindergarten. The story is told that, she and her husband had the only paved driveway in their section of Avondale. She would happily allow the neighborhood children to play with their bikes, scooters, wagons and other “wheeled” toys in the driveway. A comment was made that she should go into the kindergarten business as all the kids were already always playing at her house.  Soon Mrs. Till was formally holding kindergarten for 4 and 5 year olds in her living room. The 1950-51 City Directory lists the Tills at 23 Riverdale.

The Kearse’s moved into Avondale in 1952 and Cele attended kindergarten when she was 4 and 5 years of age. Barney, Cele’s brother, attended for 3 years beginning at 3 years of age; Barney was the exception to Mrs. Till’s rule of only accepting 4 and 5 year olds. Barney’s best friend, who was 4, lived behind Mrs. Till’s in the neighborhood of Westwood. Barney would “escape” from home two doors down and come to visit his friend. Everyone gave up trying to keep him at home and just let him be with his friend at the kindergarten. 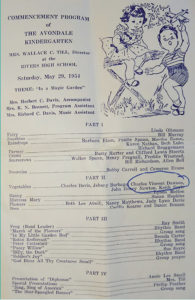 The kindergarten must have been quite successful, as the Tills built a new room off the back of their home just for the kindergarten and Mrs. Till regained the use of her living room for company. In addition, a sandbox and playground toys were added over time. Cele recalls that the kindergarten was opened into the 1970s.