A Song of Charleston 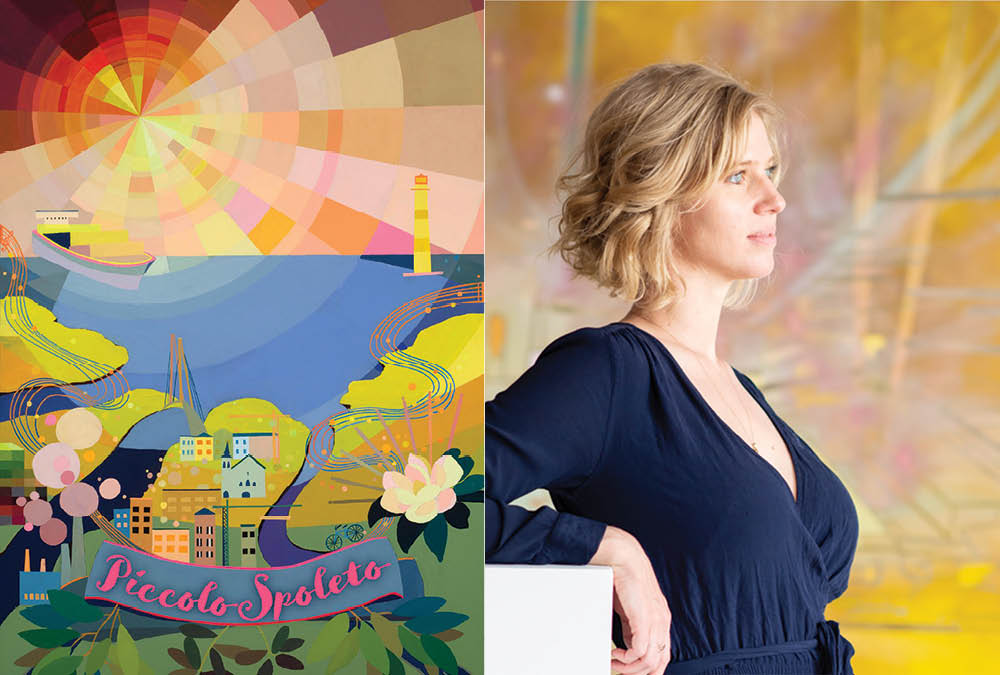 One of the casualties of the COVID-19 pandemic was last year’s Spoleto Festival USA and the accompanying Piccolo Spoleto, which is put on by the City of Charleston’s Office of Cultural Affairs. The festivals, which run simultaneously from the end of May until around mid-June, are not only a boon for the local economy, but they bring world-class performances and art to our city. So when it was announced that the festivals would return this year, there was a sigh of relief and an excitement that was palpable around the local arts community.

“Happy upcoming Piccolo Spoleto Charleston. You’ve been through a lot. I wish you music, art, and joy. This painting came straight from my heart as a love letter to my town. I’ve been waiting over a year to share it,” wrote West Ashley-based artist Kate Hooray Osmond in an Instagram post last month unveiling the poster design for the 2021 festival.

The accomplished artist was commissioned to create a poster for the 2020 festival that was local to Charleston and reflective of the arts. More than a year later, she and the city are finally getting to show it to the world. Entitled “A Song of Charleston,” the poster encompasses the full spectrum of color, a sort of signature of Osmond, who often plays with cycles of light and cycles of color in her works.

“Happiness and sadness is all a big piece of the pie, you have to embrace it all. If you like the light parts, you have to embrace the dark parts too,” says Osmond, who started off as a welder and spent some time working for Garman photographing waterways from the air.

After taking thousands of photographs of the waterways of Canada, the entire Mississippi River, the Great Lakes, and the Gulf of Mexico, Osmond says she got burned out. After her son was born, she hung up her welding helmet and gloves and focused her artistic energy on painting.

Osmond’s experiences are ever-present in her work. While she no longer wields a torch to create art, the presence of industrial elements are often seamlessly incorporated with nature in her paintings, not in a juxtaposition but in harmony.

“I love industrial and manmade object and the natural environment,” says Osmond, noting that Charleston offers great example of both. This is present in “Song of Charleston,” where iconic manmade symbols like the Cooper River Bridge, the Morris Island Lighthouse, or a cargo ship in the harbor are woven into the natural beauty of the Lowcountry, which is represented with magnolia blooms, rivers, leaves, and a bright sun. The sun is done as one of Osmond’s signature circles, which encompasses the full cycle of color and light, drawing your eye in to the center of the sun before radiating outward to the rest of the city.

While her days with Garmin are long behind her, Osmond occasionally still hitches a ride on a helicopter to take her above Charleston to get some photos, which she uses for the basis of her unique arial perspectives of the city. This is also represented in “Song of Charleston” which features a birds-eye view of of the region, capturing the harbor, the rivers, churches, and colorful houses.

“You can see some things from a drone, but it’s just not the same thing,” says Osmond, who lives in the Northbridge Terrace neighborhood and sees a lot of opportunity for art on this side of the river.

“West Ashley has been this awesome bubble, but everyone here is so tied into everything and we’re so close to everything,” she says, contending that just because we don’t have galleries and museums doesn’t mean we don’t have an art scene that is unique and important to greater fabric of Charleston. She describes the West Ashley scene as “not hippy, but very humanist,” noting that the different social-economic neighborhoods of West Ashley provide a rich texture and an opportunity to view things from different perspectives. She says it’s in these places and situations where often art arises.

“If any one child or adult reflects on something in a way that’s different, that’s art. I think that’s art,” says Osmond. “Bottom line — organisms if they don’t change, they die. So let life happen.”

Osmond earned her MFA in Studio Art from Maryland Institute College of Art and her BA from Saint Mary’s College of Maryland. She was named the State Fellow for South Carolina by the South Carolina Arts Commission and was the 2017 Griffith-Reyburn Lowcountry artist of the year. Osmond exhibited her first solo museum show at the Franklin Burroughs/Simeon Chapin Art Museum in Myrtle Beach in 2018. Her paintings were included in the 2019 Biennial by the Center for Contemporary Art of South Carolina.

Osmond is the recipient of numerous grants and awards and has exhibited internationally. Her work can be found amongst the collections of the Franklin Burroughs/Simeon Chapin Art Museum, the Medical University of South Carolina, the College of Charleston, and other public and private collections, including The Miller Gallery on East Bay Street. In October she will be exhibiting her unique landscapes in a show at City Gallery downtown on Prioleau Street.

This year’s Piccolo Spoleto Festival runs May 28 to June 13. The event Family Fun on the Greenway will be held in West Ashley on Friday, June 4 at 6 p.m.  The program guide for Piccolo Spoleto is now available for download at www.piccolospoleto.com.