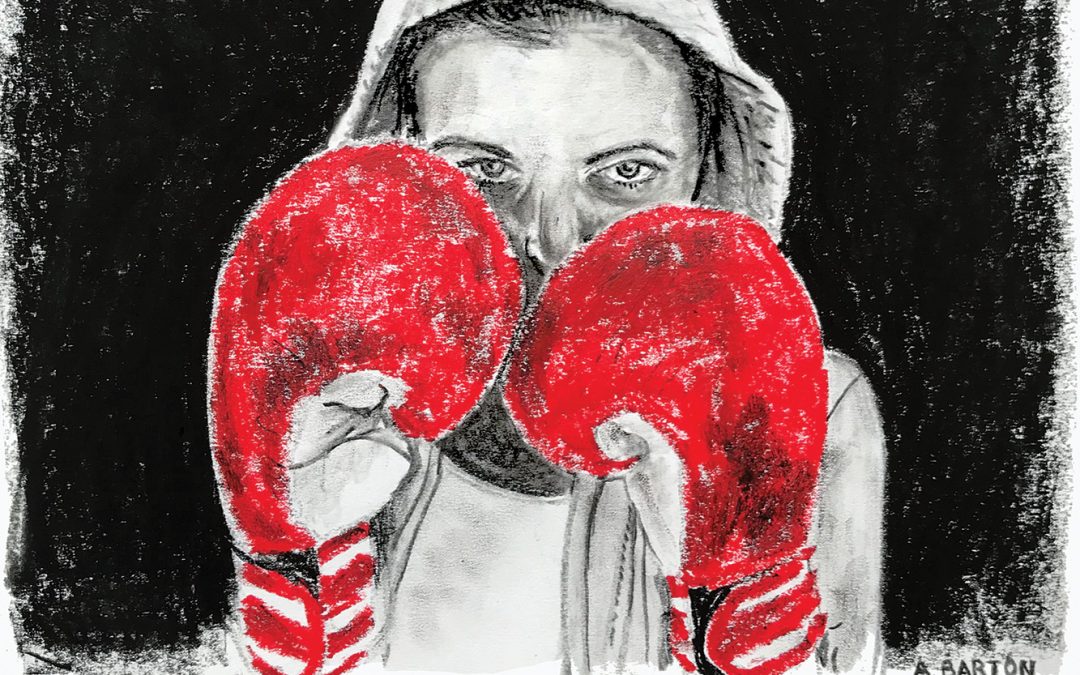 Innovative program teaches skills that go far beyond the ring

Growing up in West Ashley, Beth Matenaer was a defiant kid. By her own admission she frequently butted heads with authority and often found herself in trouble in and outside of school. As a professional therapist for more than two decades now, she uses that life experience to help her better understand the frustrations and challenges her clients face and why they might become withdrawn or aggressive. It’s this kind of real-life experience that can’t be taught in a classroom or from a textbook.

“I became a therapist because people had helped me,” says Matenaer. “And over the past couple of years I’ve just been more and more pressured to want to do more as a therapist, especially with people who are harder to treat and also to help people on a larger scale.”

Being a tough case herself, Matenaer takes pride in developing unique strategies for hard-to-reach clientele. She’s a certified equine therapist and has used other non-traditional approaches over the years.

But it wasn’t until recently, when she was working on her own physical and mental health, that something clicked for the mother of two. Actually, it was less of a click and more of an “explosion,” as Matenaer describes it. And with the help from a local boxing trainer, that explosion of inspiration gave life to a new innovative and therapeutic program as well as a new business venture.

“I love fitness. It makes my mental health better just to be active,” says Matenaer. So she recently took up an interest in boxing. She already had a heavy bag in her garage and wanted to learn more about the sport and conditioning regiments that go along with it. A friend of her husband, who happened to be a boxing trainer, came over to their house to show her some simple boxing workouts she could do at home.

That trainer was Jason Scalzo, a former member of the U.S. National Tae Kwon-Do team who has trained and coached both in boxing and tae kwon-do for nearly 30 years. “It got me through some difficult times as a kid and got me through difficult time as an adult,” says the entrepreneur and philanthropist, who has started several independent business ventures and multiple charitable organizations primarily for children in vulnerable circumstances.

According to Scalzo, he was so inspired by his hero Muhammad Ali and the work the late boxing champ did in Africa that in 2017 he walked away from his good-paying 15-year career in the Medical Technology Industry to pursue his dream of starting a youth boxing program in West Africa for rehabilitated child soldiers and orphans of war.

“I found that we were able to redirect aggression in a functional manner, but it wasn’t until I met Beth where I was able to see how it applied to neuroscience, neurology, and body chemistry,” says Scalzo.

While showing Matenaer some basic boxing workouts, Scalzo started talking about his work in Liberia. “It was really exciting and really inspirational,” recalls Matenaer. “He started telling me about it and I said ‘do you know what I do for a living?’ He said ‘no’ so I told him and then asked him ‘do you know why what you do works? And he said ‘no.’”

That’s when the wheels really started turning for Matenaer, a licensed professional counselor, who had spent her last 25 years working to find creative approaches to helping others with mental health challenges and developing unique strategies for her clients.

“[In boxing] there’s a lot of bilateral movement — rhythmic movement across your body, like rhythmic stimulation, repetitive movement. And I know from equine therapy and my own background and experience, that it regulates the brain when you do that. There’s a science to it,” explains Matenaer. “I started to explain to him that there’s a reason it actually helps those kids … Then I asked ‘why are you not doing this here?’”

And that was the moment Matenaer describes as an explosion. 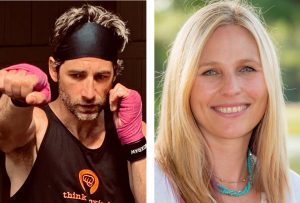 “The application that it has here in the context of mental health was obvious,” says Scalzo. “But I didn’t have the network or the relationships to penetrate this market.” But Matenaer did.

“We both remember that exact moment when my wheels started spinning and smoke started coming out of my ears. I went off in this direction and started explaining the brain science part to him and how that works emotionally,” she says “It blew his lid off because he knew he was helping people but he didn’t know why.”

Since that night in Matenaer’s garage, the two have gone on to form a company called Innerpoint and under that umbrella have created a program that combines the fundamentals of boxing training with brain science to help people of all ages. Currently Think Boxing has students ranging in age from 5 to 72.

According to Matenaer, it’s the training part of boxing that seems to help people and not necessarily the actual contact. “There are therapies that are based on some of these concepts, like EMDR (Eye Movement Desensitization and Reprocessing) which uses eye movement stimulation or use bilateral crossing that stimulates both sides of the brain at the same time to help people process,” explains Matenaer.  “From that we asked ‘what if we were using boxing for a mental health purpose like what are the boxes that we’d really want to check if we really wanted to do that?’ So we created a very, very specific curriculum that uses elements of the boxing training and rhythmic movement. It uses mindfulness pieces, it uses pieces of high-intensity interval training.”

Think Boxing offers both one-on-one sessions and group sessions. They have partnerships with several area gyms, including The Sweatbox, located at 1525 Ashley River Road and American Top Team of the Lowcountry, located at 1850 Wallace School Road in West Ashley. Starting in the fall, Think Boxing will be added to the after-school programs at several Charleston County Schools, including Orange Grove Elementary and Middle schools, Porter Gaud, and Carolina Voyager Charter School here in West Ashley. 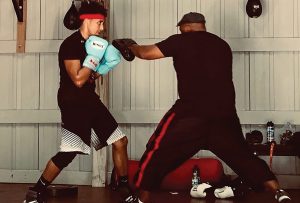 “We modified a curriculum and we presented it to mental health providers around town,” says Scalzo. “It was met with such positive response that organically we realized it would be great if it was offered at school because of the transportation issues.” Scalzo says charter schools have been the most responsive because they have more autonomy with the programs they can offer.

There’s a big difference between Think Boxing and a traditional boxing lesson.

“What we’re doing is very intentional and brain-based and the outcome and the goal is to regulate the brain. It’s not just to create boxing skills, it’s actually to make your brain feel better,” according to Matenaer, who says that the discipline and responsibility that comes from training is more of a secondary gain. “That’s awesome and so the culture of boxing is awesome. But our actual goal is about regulating the brain, increasing the way those parts of the brain are working together.”

The underlying concern with nearly all mental health issues, according to Matenaer, are when our brains become disregulated.

“Whether that’s from trauma or overstimulation — like on the spectrum or overstimulation in ADHD — there’s a similarity that’s all about an imbalance, whether that be chemical or in the way the brain is operating,” she says. “So we know scientifically that exercise does a ton to help with that imbalance. It helps with brain growth, so the components we put in are very intentional. The actual goal behind it is brain regulation and better functioning … So the curriculum is very intentional and brain-based.”

Matenaer is very clear, however, that Think Boxing is not therapy. “We’re not doing therapy, but we’re doing something that has therapeutic benefits,” she says.

In her line of work, Matenaer has seen a lot of people who fall through the net in our mental health system and many of them just aren’t going to come in and talk about their issues. “I was not a kid who was going to come in and talk about it,” she says. “Now I would have gone and hit a bag. And if it made me feel better — whether I talked about it or not — and it made my brain regulate, then why does everything have to be solved by talking about it?”

While the Think Boxing coaches are not trained therapists, per se, they’re also not just basic boxing trainers either. According to Matenaer, all Think Boxing coaches have some kind of background in helping understanding and learning in addition to boxing training. They are trained “emotionally-safe” coaches, who must pass a rigid certification created by Matenaer, and have an understanding of mental health.

“It’s common that people will form attachments to their trainers. So it’s good that the trainers are ethical, that they are vetted, and they have been put through a lot of oversight and supervision,” says Matenaer, who personally trains the coaches in her curriculum. She says the sudden popularity of the program has created a need for more coaches locally and is actively looking to hire more people, get them certified, and involved in the program, which has really taken off in the last several months since her and Scalzo started Innerpoint and launched Think Boxing. 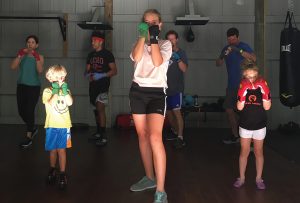 As innovative as the Think Boxing curriculum may be, it’s just one part of the larger vision that Matenaer and Scalzo have for their company Innerpoint.

“The bigger plan is to have multiple lanes. So right now, boxing is our first lane. But the goal is to have a bunch of modalities that are therapeutic in their benefit, but aren’t therapy,” explains Matenaer. “Not every kid will attach to boxing. But what if they attach to fly fishing or paddleboarding? Or what if they attach to spoken word or poetry? So the idea would be is that we develop these tracks over time. So right now boxing is the track that we’re doing here.” She says they’re looking at expanding into veterans programs and senior networks in the near future.

Think Boxing is hosting a Youth Boxing & Skills Class every Tuesday and Thursday from July 9-30 at American Top Team of the Lowcountry, located at 1850 Wallace School Road. For more information call (843) 568-8796 or email jason@thinkboxing.com.