A Culinary Tour of the Caribbean 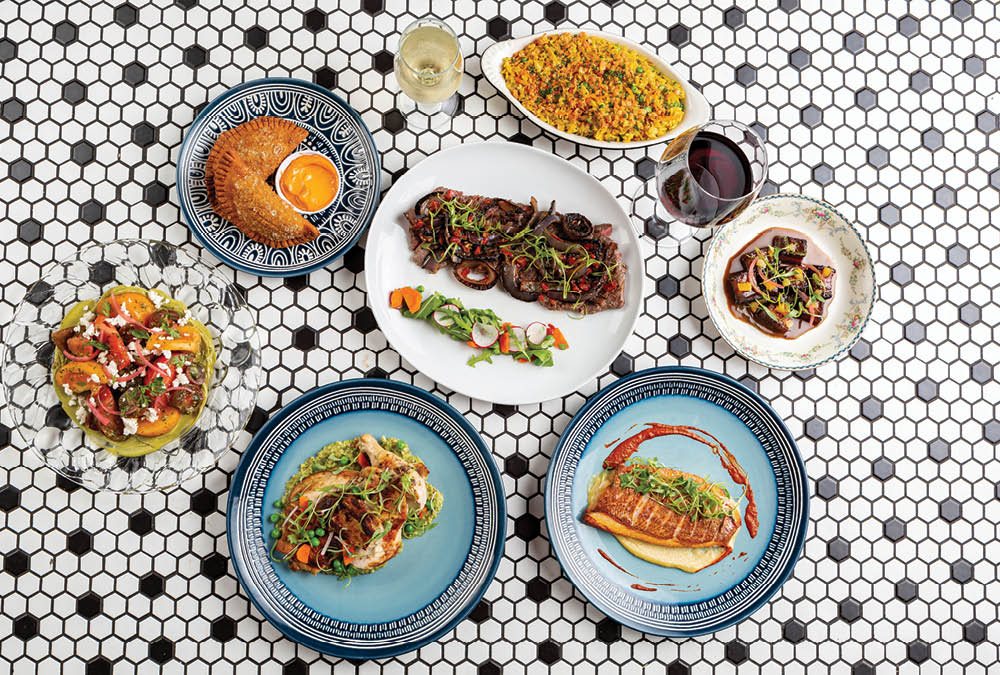 New Pan-Caribbean restaurant Patois takes over where Spanglish leaves off

After opening to much fanfare in late 2019, Spanglish Cocina+Bar struggled through a rocky 2020 that resulted with the original owners, including the head chef, leaving town and heading to Greenville. Rather than completely abandoning ship, the remaining investors and staff have pulled together to create a new concept at the restaurant, located at 652 St. Andrews Blvd, which was also previously the longtime home of The Blue Rose Café.

Patois (pronounced pa·twaa) is a pan-Caribbean restaurant, which aims to introduce diners to an array of diverse, colorful, and refreshingly minimalistic dishes, showcasing bright flavors, spanning from the West Indies to Mexico.

“We are grateful for the opportunity to share our concept of simple, ingredient-driven cuisine influenced by the agricultural heritage shared with the various lands surrounding the Caribbean sea,” says Chef Mike Fitzhugh. As the previous Chef de Cuisine of Spanglish, Fitzhugh says there is growing support for the restaurant’s new direction. “We have received substantial support from the community already and look forward to showcasing our simple yet sophisticated cuisine to our guests.”

Fitzhugh has worked in fast-paced, high-volume fine dining establishments up and down the Eastern seaboard. He is thrilled about running the kitchen of what he calls a “neighborhood restaurant.” Fitzhugh, who in West Ashley, is a member of that neighborhood and is excited to bring his “dream menu” to residents of West Ashley.

Fitzhugh, who enjoys traveling to the Caribbean for its lively cuisine, has finalized a mouth-watering lunch menu, now available for dine-in (inside or al fresco on Patois’ patio) and delivery via UberEats. Guests can enjoy lunch favorites like Tomato Salad with avocado mousse, fresh cheese, and pistou, Cuban Sandwiches; and Chicken Torta with red chiles, maduros, and black bean spread, all inspired by Fitzhugh’s travels.

In addition to ordering dishes individually, Patois’ dinner menu features a “Chef’s Menu” option, that includes the choice of an appetizer, entrée, and side for $35. Diners can choose between starters like Pork Belly with agave, citrus and herbs; and Shrimp Ceviche with leche de tigre, onion and radish; alongside delicious entrées like Merlot Steak with charred onions, red chimichurri and arugula. Savory sides feature the freshest Lowcountry produce to create dishes like Roasted Carrots Escabeche with chermoula and yogurt, and Sea Island Red Peas Sofrito, to name a few.

Fitzhugh says the menu will change seasonally as different things become available locally. There are other changes in the works for Patois as it transitions from Spanglish, including an interior redesign and patio improvements outside.

Patois is currently BYOB, allowing diners to bring their favorite wine and beer to drink alongside their meal for no additional fee. Non-alcoholic beverages are available and a selection of exciting Patois mocktails will be coming soon.

As part of the rebranding effort and commitment to community support, the restaurant recently purchased its dinnerware from ReTail in West Ashley, a resale store that sells a variety of furniture, appliances and decorative items, and donates 100 percent of all proceeds to Pet Helpers.

Also, during the transition period from Spanglish to Patois, guests will receive a complimentary cookie from West Ashley’s WildFlour Pastry, who will provide many of the restaurant’s baked goods and desserts.