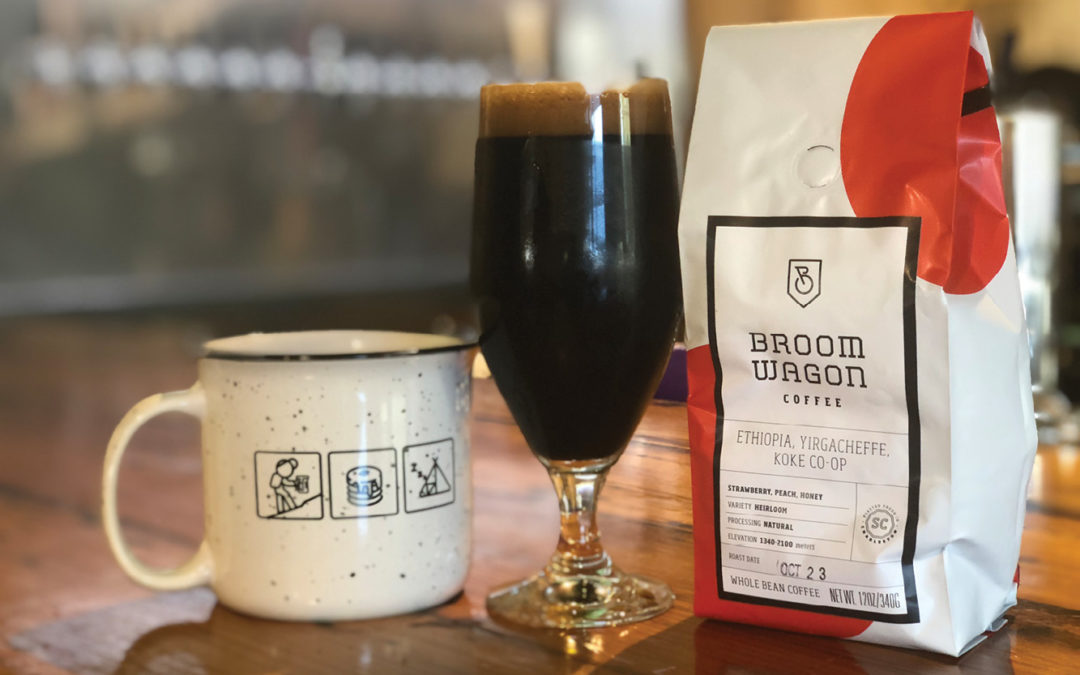 Coffee and beer are among the oldest and most widely-drank beverages on the planet. And while they’re different in many ways, they also have a lot in common. The same could be said for Broom Wagon’s head roaster and co-owner Jeremias Paul and Charles Towne Fermentory’s head brewer and co-owner Adam Goodwin. Both West Ashley businesses are lauded for creating quality brews, one a roastery and neighborhood coffee shop, the other a brewery and neighborhood tap house.

Over the last couple years, both businesses have been creating quality brews of a different variety. However, they recently teamed up to create Slipstream Coffee Stout, a full-bodied, dark and roasty ale brimming with coffee notes.

The Slipstream Coffee Stout compliments what both businesses are doing right here in West Ashley. It also highlights the passion that both the roaster and brewer bring to their craft. And while this is not the first time the two businesses have collaborated, this is the first time they’ve done a large batch of beer together and canned and sold it at the brewery.

“We have done some cask-conditioned beers and small batches with their coffee, but wanted to get a full-scale batch out for the fall. We are big fans of what [Broom Wagon] does and definitely wanted to showcase their beans in our beer.” says Goodwin. “Jeremias is very detail oriented and cares deeply about his craft. He values quality first and foremost and the care he puts into his coffee is definitely apparent in the finished product. This is why we enjoy his coffee so much and feel that it is a great compliment to the beer. We take great pride in choosing high quality ingredients and definitely want to support other local small businesses as much as possible.”

The respect is clearly mutual. According to Paul, he and his wife/business partner Rachel are strong supporters of what Goodwin and assistant brewer Justin Slotnick are doing with the West Ashley-based brewery.

“When we first met Adam and Justin, we quickly bonded over our obsessive natures and love for quality beer and coffee. We’ve done a few smaller collaborations in the past. When it came to a coffee/beer can collaboration, it seemed like a perfect fit,” says Paul. “Adam and Justin view beer brewing in much the same way we view coffee roasting. We both care deeply about the products we make and are constantly striving to innovate while maintaining quality and consistency.”

According to Goodwin, with cooler weather finally here, he and Slotnick decided they wanted to create a dark beer using coffee. They knew immediately, they needed to get in touch with Jeremias and Rachel Paul of Broom Wagon, whose coffee shop is located on Ashley Hall Road and whose roastery is located off of Ashley River Road. Charles Towne Fermentory, which is located along Savannah Highway in the Avondale Business District, also offers Broom Wagon’s cold-pressed coffee on tap in its tasting room.

“As the weather gets cooler, it becomes stout season. So we brewed this base stout with a restrained roast character knowing that the roast of the coffee would help to balance it out,” explains Goodwin. “The bright coffee character and roast meld really well with the dark chocolate and lighter roast character of the malts to create a beer that is dark, balanced, and, we think, quite drinkable. Perfect for the cooler months, but at 6.5 percent, it’s a stout that you can have a couple of.”

Both Goodwin and Paul are happy with the final product and the beer speaks for itself. Slipstream is a bold mash-up of sticky chocolate, roasted marshmallow, caramel, and toffee with a big infusion of coffee.

“Often times in coffee stouts, the quality of the coffee is overlooked. Since Charles Towne Fermentory cares about every ingredient that goes into their beer, that attention to detail is evident in the finished product,” says Paul. “We source extremely high-quality coffees and meticulously roast them to bring out their inherent flavor profiles.”

According to Paul, he talked with Goodwin and Slotnick about which of Broom Wagon’s coffees would best compliment the flavor components of their beer. They decided on an Ethiopian bean from the Koke Co-Op in the Yirgacheffe region. “We felt the bright fruity strawberry and peach flavor notes worked perfectly with the beer,” says Paul, who roasted the coffee specifically for this collaboration and then brewed it on site with the help of Goodwin and Slotnick.

On Saturday, Oct. 27 Charles Towne Fermentory held a can release for Slipstream Coffee Stout, which as of press time, was still on tap and available to purchase in 4-pack 16-ounce cans at Charles Towne Fermentory. However, when it runs out, it’s gone. At least until the two businesses decide to team up for another collaboration. Something both Goodwin and Paul say they will absolutely do again.