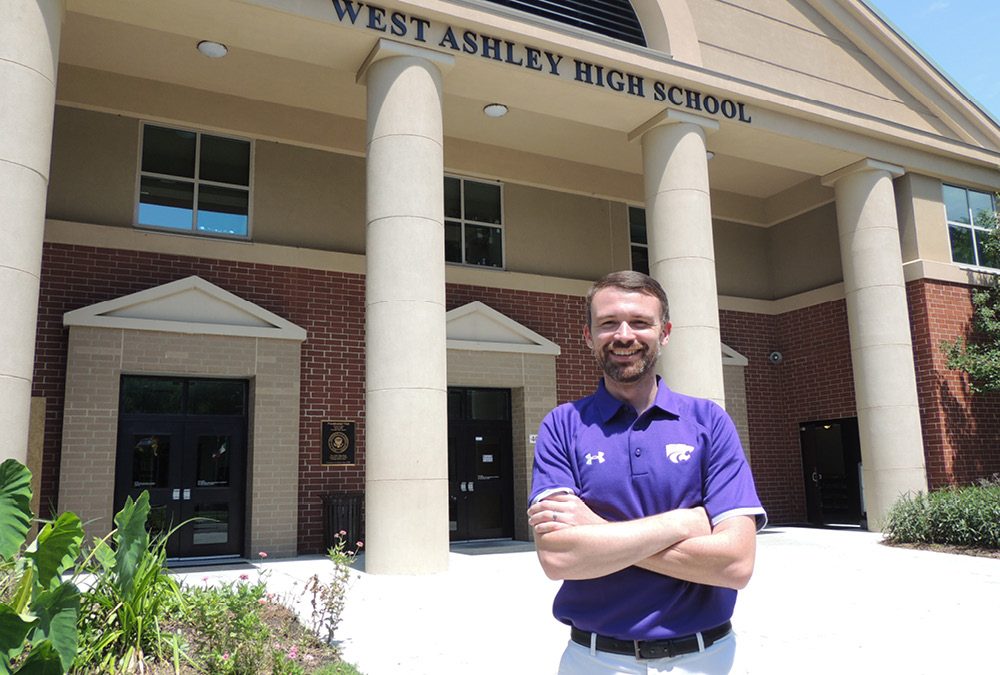 May 30 is a day that Ryan Cumback will never forget. Not only was it the day he was announced as the new principal at West Ashley High School, but it was also the day his wife had given birth to their second daughter Lucy.

The district’s announcement to make Cumback principal came after a drawn-out measure by Charleston County School District Superintendent Gerrita Postlewait to replace the school’s former principal Lee Runyon, who had been there for five years, succeeding his mother Mary Runyon in the role.

“Ryan has been a remarkable leader at Moultrie over the last three years,” says Postlewait. “He not only has developed excellent rapport with the students and families he has served, but also has demonstrated skills, experience, and leadership fundamental to successfully lead West Ashley High forward in the years to come.”

For Cumback, who had been the principal of Moultrie Middle since 2016, it’s a kind of homecoming. Prior to his time in Mt. Pleasant, Cumback was a classroom teacher, Assistant Principal and Associate Principal of Curriculum and Instruction during a previous decade-long tenure at WAHS.

During his time at WAHS, Cumback was the recipient of the 2010 South Carolina Department of Education “Initiative Award” and was selected as the WAHS Rookie Teacher of the Year for 2006-2007.

While he may feel completely comfortable back at WAHS, don’t expect Cumback to sit back and accept the status quo. He has been cleaning house in every sense of the phrase.

Starting this school year, WAHS will have a new athletic director, a new head football coach, a new head volleyball coach, and a new guidance director, just to name a few of the administrative changes Cumback initiated immediately after being hired.

“Because I worked here for 10 years, I knew who was carrying their weight and who wasn’t,” says Cumback, who even threw out the old Wildcat mascot costume that was stored in his office because it had mildewed and began to smell bad.

According to the new principal, one of the main reasons for all the changes is the fact that 40 percent of West Ashley parents choose to send their children somewhere else, be it a private school or charter school out of the area. Cumback says he plans to work hard to change the perception of WAHS among the community. As of press time, there were 35 students who had previously left or chosen not to attend WAHS, who were now enrolled and would be attending the school this fall, according to Cumback.

A change in perception among the community is about more than bringing students back to the fold. It’s community building at its core. If a high school is deemed desirable, like James Island Charter or Wando High, then better teachers and coaches will be attracted to that school. In turn, people will see the high school as a benefit for relocating or buying a home in  West Ashley and property values could see an increase, which in turn atrracts more and better businesses, which create more tax revenue, which help with better roads, parks, etc.

“The most exciting part about this job is having the potential to change the community,” says Cumback. He sees this beginning long before a student gets to the high school level. “I need to be working with the elementary schools. All of us are working in silos over here right now and we need to bring the community together.”

Cumback has outlined three main priorities to help achieve his goals of making WAHS a school the community will be proud of.

Number one is campus safety, which includes discipline and the perception of discipline at the school. He says it’s a big reason why families choose not to send their kids to the school. Cumback has already implemented several new initiatives to improve safety and enforce discipline when needed.

Number two is to continue to improve the academic expectations of the students. Currently there are 31 classes students can take for college credit at WAHS, 12 dual-enrollment courses and 19 AP classes, where college credit is a possibility. Cumback says, starting in Fall of 2020, he is working with the College of Charleston to bring additional college credit courses to the school.

Finally, his third priority is to be an advocate for his staff. “To just be the teacher supporter/servant/leader I feel I’ve always been,” he says. “I want the teachers to feel I have their backs and support them everyday.”

Cumback feels his experience as a classroom teacher himself not-so-long-ago helps him relate to the challenges teachers face.

Ironically, Cumback credits his predecessor’s mother for his change in career.

“Every ounce of my professional career was started by — and I owe to — Mary Runyon,” says Cumback. “She saw me as a classroom teacher and pushed me into administration.”

When Mary Runyon stepped down as principal at WAHS, Cumback was then considered for the position, along with her son Lee Runyon, who eventually got the position in 2014.

“Lee and I were finalist for the principal position at that time and I’m glad they didn’t hire me. They shouldn’t have hired me. I wasn’t ready,” admits Cumback, who seems more than ready for the job now five years later. “I’ve learned a lot from the Runyons and take a lot from them.”

After leaving WAHS, Lee Runyon was reassigned as the principal at the Center for Advanced Studies in North Charleston.

With a new school year just days away, Cumback has been busy interviewing candidates for vacancies and talking with parents. It’s something he enjoys and feels is important. “I hate being a slave to the computer. I’d rather be out in the hall as much as possible. I prefer face-to-face interactions.”

He’s also working to get everyone at WAHS on the same page and is making efforts to bond with teachers and other WAHS staff, many of whom he worked with during his first tenure at WAHS, prior to his stint at Moultrie Middle.

“The first day back for teachers is Aug. 14. But we’re not coming to the school. We’re going to Charles Towne Landing. We’ve rented Founders Hall and we’re going to get together to set goals, eat good food, and have fun,” says Cumback. “The first day back for teachers is the worst day ever. You’re usually bored, sitting in a cold auditorium. I wanted to do something fun and different and set the tone for the rest of the year.”