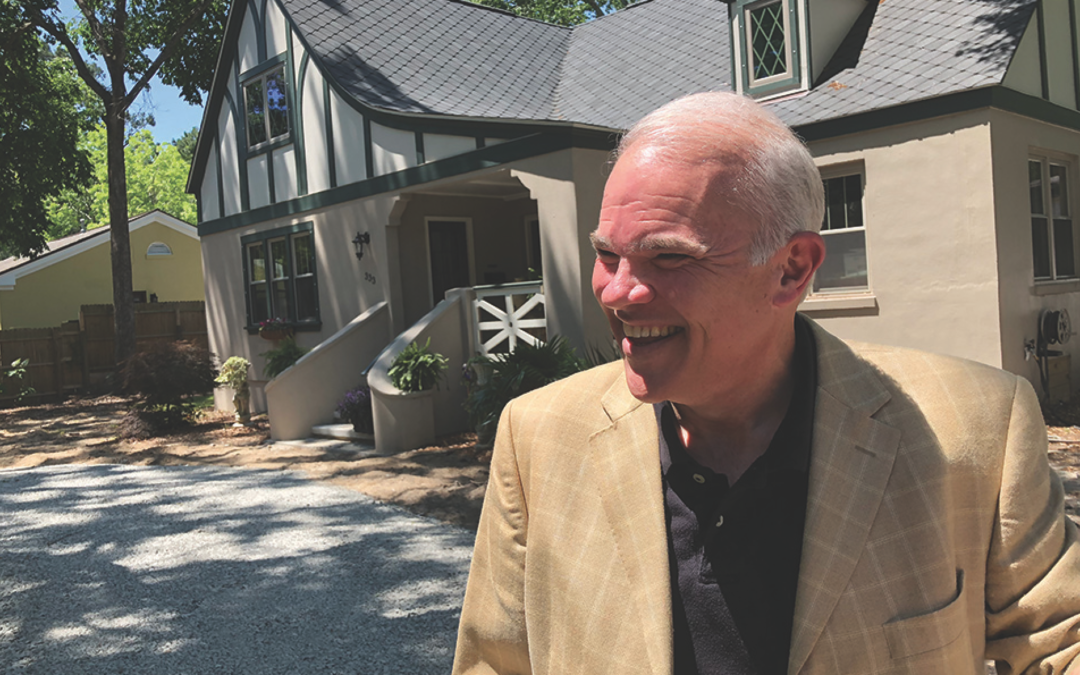 Local realtor and preservationist brings style, history, and prosperity to his projects

It’s impossible to drive around the West Ashley and not see Charlie Smith’s imprint.

Smith, a local realtor, preservationist, and former county planning commissioner, has fought diligently to improve all of West Ashley, but has had his biggest impact near the intersection of Wappoo Road and Savannah Highway.

Smith knows how to make a splash:

A few years ago, Smith hopped out of his European roadster and in coat and tie, started yelling and waving his arms, and stopped a dozer from demolishing a vegetable shed that had been located near that intersection for decades.

He successfully fought to save the former The Cavallaro nightclub on Savannah Highway, which still stands as a former auto showroom.

When he ran as the state’s first openly-gay politician against the late John Graham Altman III for a seat in the state legislature, he zipped door-to-door on a two-wheeled Segway. He lost the race but made a lot of points.

One of the points Smith consistently makes is that there is plenty in West Ashley, and not just on the peninsula, that should be saved. And he puts his money where his mouth is.

“We love to … what we like to do is take houses that are an eyesore or are dragging down its surroundings, and give it new life,” says Smith who currently lives with his husband along Wappoo Road in a home that had become too hard for an elderly couple to maintain.

He picked it up a few years ago, boarded windows and all, for $70,000 and has since poured money, design prowess, and a preservationist’s eye to a German Baroque cottage. Zillow has its value listed at around $270,000 using national algorithms, while it would likely appraise north of a half-million.

Meredith Demetre lives around the corner from Smith and is one of the “Women of DuWapp” who have pushed, pulled, and persuaded the city and county into improving their area.

“It would be hard to imagine how that house could have looked worse,” says Demetre, who was so pleased by Smith’s transformative work, that she sent him a lead on another house that was coming up for sale in the neighborhood, even though they don’t always see “eye-to-eye” with Smith on everything.

Rachel Davis, a local realtor and mom, is selling her family’s home a few lots away from Smith. “We call it the ‘Mullet’ house – business in front, party in back,” Davis says of her own abode, which features a pool and second structure in the rear.

Davis says she is “excited” about the work Smith has done redoing his current home, and that it’s reduced visual blight along Wappoo. “It lets everyone know, from neighbors to potential buyers, what can be done here.”

Davis says, as a professional and not just a neighbor, that Smith has “absolutely” increased others’ property values in the area.

Davis and Demetre’s homes are located a few blocks down from the Plantation Pharmacy, which not too long ago was a ramshackle clapboard bungalow before being lifted into the air and further improved into a bustling commercial spot, thanks to Smith.

In truth, the building looks like it was air-lifted from Daniel Island. (It’s fancy.)

Before moving to Wappoo, Smith punctuated the Woodland Shores neighborhood over the years with his vision of what can be done with simple brick ranches. Every few blocks, instead of a traditional ranch, Smith transformed them into a Miami-esque nomenclature, replete with stucco exteriors and ceramic tiled roofs.

Local journalist Andy Brack bought one of those houses from Smith, and has added onto it, staying within the South Florida style.

Brack uses his house as an example to those moving to town that buying closer in, and spending a little money on updates and expansion, leads to a better quality of living than is available further out in bigger, vinyl-clad neighborhoods.

Brack argues that Smith “saw this 10-12 years ago, that people were tired of traffic from Summerville, and realized they could take an older home, and with a little money have a lot less travel and get a real ‘community’ feel right here.”

Brack says his neighborhood is starting to get more of a “vibe” as younger families are moving it, and he sees neighbor’s homes selling for more than $400,000.

Even though work continues on the new house and its landscaping, Smith can be found some days on his back porch. When he first bought the house, the backyard was so overgrown “we didn’t even know there was a 40-foot oak tree back there,” says Smith.

It was, and Smith cleared out the dross and underbrush and exposed the jewel. Kind of what he does with houses and West Ashley.