Sushi at a Sports Bar? 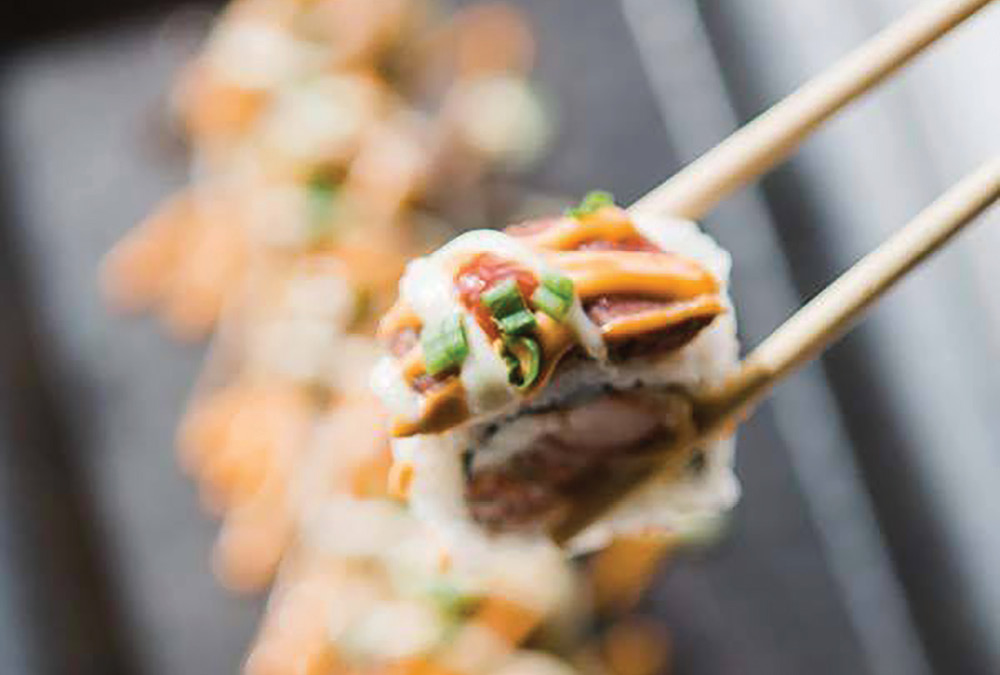 When you go to a sports bar to watch your favorite team, you might expect to have some wings or a burger, but you probably aren’t expecting to eat award-winning sushi rolls or fresh nigiri and sashimi. And likewise, when you go out to have sushi, you might not expect to see dozens of flat screen TVs, 12 craft beers on tap, or a vast gourmet taco menu. But that’s exactly what Locals is all about, taking your expectations and then blowing them up.

“Being able to show a different side of the sports bar by offering sushi, that’s kind of been our niche,” says co-owner Corey Lewandowski. “And with the sushi side of things, to be able take something that’s usually in a setting where it’s dark and quiet to a setting where you can watch a game is also unique.”

It’s this sort of non-traditional approach that has made Locals’ original Mt. Pleasant location a favorite East of the Cooper, winning “Best Sushi” by the readers of Mt. Pleasant Magazine in 2015, 2016, 2017, 2018, 2019, and 2020. Now, Locals has made its way across the county to West Ashley, taking over the space which had previously been occupied by Manny’s Greek Café for nearly three decades.

“We were looking for a spot in either West Ashley or James Island when the Manny’s space came available,” says Lewandowski, who grew up just down the street and was part of the first graduating class of West Ashley High School. “I remember going to Manny’s every week with my family. I never thought in a million years that I would be partner in a restaurant in this spot,” says Lewandowski.

It took several months to renovate the space, which includes a full bar in addition to a sushi bar, but Locals was able to open in time for the college football National Championship and for the Super Bowl. Locals also took over the neighboring M.E.S. Travel space, which moved to a new location along Savannah Highway, and is using it for overflow seating during extra busy times.

While Locals may be best known for its more than 30 adventurous sushi rolls — like the Local Lovers, which has tempura-fried lobster claws, avocado, shredded “Krab” and cream cheese, topped with filet mignon, wasabi sauce, spicy mayo, Sriracha, sesame seeds, and green onions — it also has an elaborate taco menu and a pub food menu that is unique to the West Ashley location. There’s also a West Ashley sushi roll on the menu, which includes “Krab” salad, tempura shrimp, tempura asparagus, roasted red peppers, topped with orange masago, eel sauce, and avocado mousse.

“It’s fun for me to see the kind of hodgepodge of customers that come in,” says Lewandowski. “You might have a group of 50 years olds over here and a table of teenagers over there … You can bring that person who wants good sushi and that person that wants a cheeseburger and everyone will be happy.”

Lewandowski received a culinary degree from Johnson & Wales and prides himself on creating elevated pub food. And that is something that locals West Ashley has which differs from its East Cooper sister restaurant. While the original location specializes in sushi and tacos, West Ashley offers both in addition to some creative pub food, like its popular Diner Burger, which is two smashed Waygu blended patties, American cheese, pickles, house sauce, on a brioche bun. There’s also a Goat Cheese Burger, Honey Jalapeño Fried Chicken Sandwich, Chicken & Waffles, Butcher Block Reuben, Shrimp Po Boy, and Lewandowski’s “Old School” Philly Cheese.

“I take Cheese Wiz and make it into a béchamel and add pimentos for a Southern flair,” says Lewandowski’s who then pours the cheesy sauce over shaved ribeye, bourbon caramelized onions and charred bell peppers. It’s this kind of added touches that make Locals more than just another sports bar and more than just another sushi joint.

Locals also offers great happy hour specials, which include 1/2 priced nigiri from 4-7 p.m. every weekday as well as $2 off selected drafts and wines, $1 off bottled beer, $4 well liquors, and $3 select shots. Additionally, sushi is half-off every Tuesday night starting at 3 p.m. and bottles of wine are half-off on Wednesdays starting at 4 p.m. Locals also plans to have live music almost every night of the week and is planning to host live trivia on Mondays.