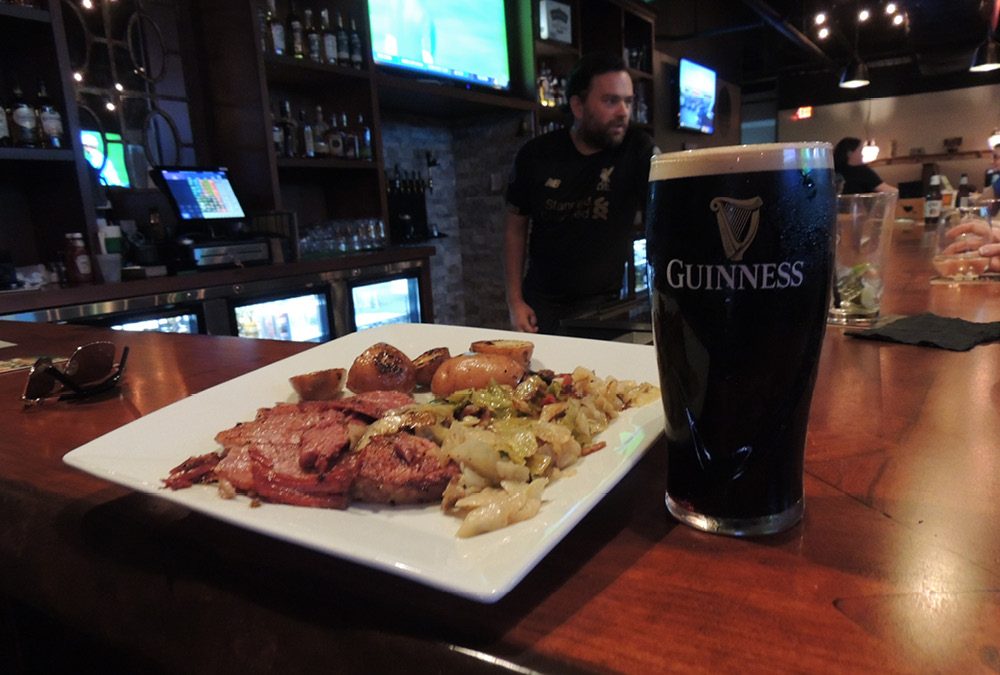 It’s fair to say that Charleston has never seen a place quite like Ireland’s Own and  Jägerhaus Pub. Inside the brand new 10,200-square-foot space that was once the cavernous Halligans Restaurant & Bar in the Ashley Town Center Shopping Center, is something that in theory, doesn’t even make sense. But in reality, is a heck of a lot of fun and a welcome addition to West Ashley’s food and nightlife scene.

If it sounds a little wacky, you just have to see it to believe it. Because it is all of those things and yet it somehow all works, thanks to the vision of local restaurateur Doug Allison.

Allison says he got the inspiration from a bar in Virginia, where he’s from, that is named Ned Devine and Ned Kelly’s. Located about 20-miles outside of Washington D.C., it was part Irish bar and part sports bar/live entertainment venue. Allison says one side is a non-stop crazy-fun party, the other was a more chill pub. This was the idea behind Ireland’s Own and Jägerhaus Pub.

The giant space is creatively and tastefully split so that it’s essentially two different bars with two different vibes and menus. However they are attached to each other and because they share a kitchen, you can order from either menu no matter which side of the restaurant you are on. If you’re sitting on the Irish side, you can still order one of eight German beers on tap. If you’re on the German side, you can still order a pour of more than a dozen Irish whiskeys. Same goes with the food menus.

While the Jägerhaus Pub side is more of a sports bar scene, with lots of video games and televisions, the Ireland’s Own side is a classic Irish Pub, with dark wood, low-lights, and traditional Irish music. And while there are still a fair amount of televisions, it’s much quieter than the Jägerhaus side. Although that could all change on Saturday mornings when the English Premier League starts back later this month. Allison, who admits to not knowing much about soccer yet, knows enough about it to realize that there is a niche to be filled locally and plans to have all the games on starting early on game days, offering a full Irish breakfast.

Even though he hails from northern Virginia, Allison says his family’s heritage is half-Irish and half-German so the combination of the two just kind of makes sense. He’ll also point out that, while many Irish pubs are owned by natives of the Green Isle, he does technically own land in Ireland.

Before opening Ireland’s Own, Allison’s girlfriend went online and purchased him a 1-meter-by-1-meter plot of land in Roscommon, a region in central Ireland. The property’s deed and a picture of his plot are mounted on wall beside the bar.

“So I’m an Irish land owner,” he says with a smile and a wink. “Plus I worked for a Guinness distributor in D.C. for 17 years. So I’ve always been passionate about it.”

With all of the different things going on at Ireland’s Own and Jägerhaus Pub, Allison makes it clear that there is one thing that remains a standard throughout the establishment. “Our big focus is food first,” says Allison. “Nearly everything is made from scratch. If you’re going to open a restaurant and use instant mashed potatoes, what’s the point?”

Allison credits local restaurant veteran Ty Frasier for helping create and execute the various dishes with quality and authenticity. Besides Irish and German classics, ranging from Shepherds Pie, Corned Beef & Cabbage to the Schnitzel, Bratwurst and Pretzel sticks, there is a host of bar food options in addition to more elevated entrées.

“Ty has been around West Ashley for a while and brought some of his specialty dishes with him, like the Wild Mushroom Ravioli or his perfect Prime Rib, both of which were big hits at Creekside Kitchen & Brewhouse where he worked previously when Allison was still a partner in that business, as well as other restaurants, such as Three Matadors and Southern Roots Smokehouse.

But last year Allison left the restaurant group to refocus on his first restaurant, Southside 17. “We were opening so much, so fast that I kind of lost focus,” admits Allison. “So it took me a couple months to get it back where I wanted it.” And once Southside 17 was back up to his standard, Allison shifted gears to a new, bigger project … one that consists of 10,200 square feet of good food, good drinks, and good times. Sláinte and Prost!