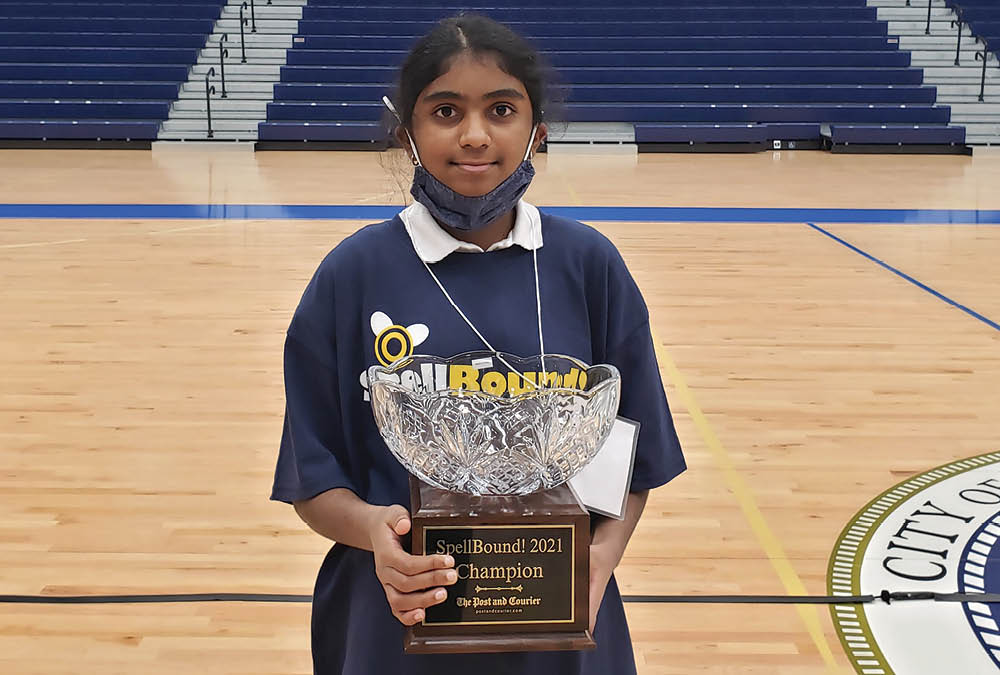 Keerthana Samuel, a seventh grader at C.E. Williams Middle School was victorious for the second time in the Spellbound! regional spelling bee March 25 at the North Charleston Athletic Center.

In 2020, Samuel won the bee but was unable to compete in the national competition due to COVID-19.

The pandemic changed the way this year’s Spellbound! was conducted. Instead of competing against 50 other students, only 14 were invited to participate so as to properly follow COVID-19 protocols.

Samuel was able to correctly spell the word “facade” and was named the champion.

“Leading up to the regional spelling bee, my parents would help me prepare from the given spelling list,” said Samuel. “The preliminary round and rounds after will be much more difficult, considering there are more words they can use to ask the spellers, and only a certain amount of students can progress to higher rounds. There will be tough competition, but I’ll try my best.”

She will now participate in and advance through preliminary rounds, quarter-finals and semi-finals before reaching the Scripps National Spelling Bee competition on July 8 in Disney World. She will again only compete against 14 other contestants rather than the traditional 300.

“We are very proud of Keerthana,” said C.E. Williams Principal Kevin Smith. “As a sixth grader, she handled the pressure of the competition and prevailed only to have the National Bee cancelled due to the pandemic. For her to return to the competition and emerge from a field of very talented and dedicated competitors as a seventh grader, is admirable. No matter the outcome, she has proven her ability to take on great challenges and that will help her well beyond the Spelling Bee.”