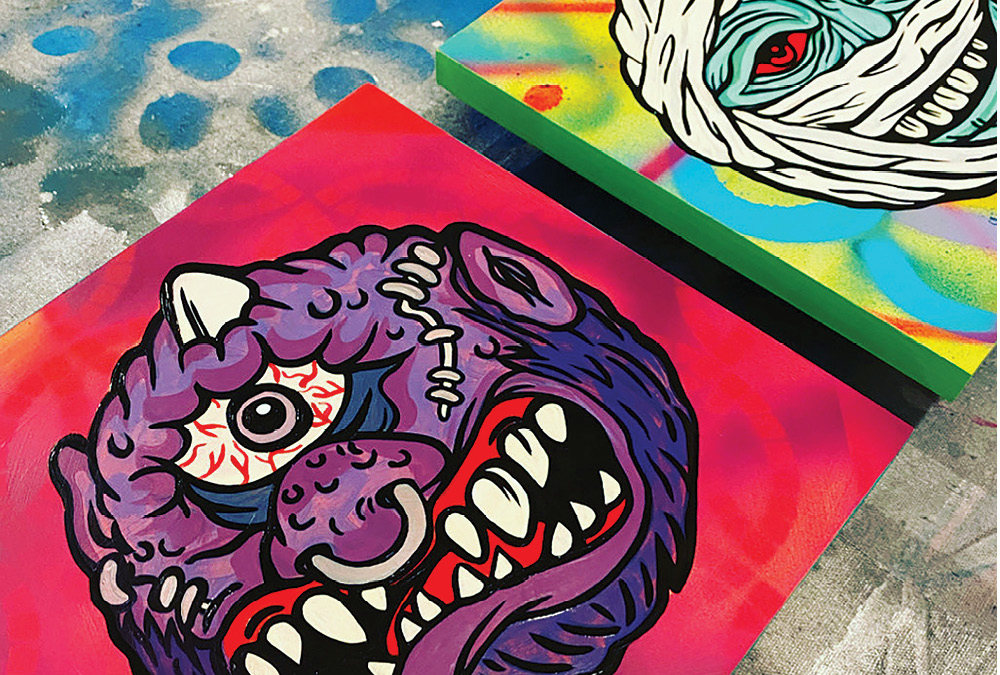 NeoPop art show featuring works by Patrick Prickett and T.M. Showers is an homage to the TV, toys, and tech from their youth

When local artist Patrick Prickett first saw the work of fellow painter T.M. Showers he knew they were kindred spirits … or that they at least shared similar passions for art and pop culture. Although the two had never actually met, Prickett noted the resemblance in colors choices — bold, bright, neon. And while their styles were totally different, Prickett leaning more towards abstract  portraits and Showers’ work having more of a graphic novel feel, there was an undeniable similarity to their work.

The two local painters are coming together for a special one-night-only art show on Thursday, Feb. 20 that will be a walk down memory lane for Gen Xers who grew up watching Jem and Holograms and playing with He-Man toys while jamming to their Sony Walkmans. The show, which will be held from 6-11 p.m. at The Schoolhouse on Magnolia Road, is entitled NeoPop and will feature around 40 new originals from Prickett and Showers with a heavy emphasis on the TV shows, cartoons, toys, and technology of the 1980s. In addition to the artwork, which will be displayed through the Schoolhouse’s corridors, there will also be live music from Andy Rivas.

The name of the show comes from the Neo-pop post-modern art movement of the 1980s, which included artists influenced by pop art and pop culture imagery. “. We’re taking that style but using what we grew up with — the toys, like Teddy Ruxpin, and the technology, like Walkmans,” says Prickett. “The show is based off of all the stuff we loved as kids. It’s very ’80s based. Very nostalgic.”

Prickett, who is originally from Alabama, spent some time creating what he referred to as “soul-sucking tourist art” before fully embracing his creative voice. “When I first started painting, you had to be in a gallery,” he explains. But now Prickett has found an outlet and an audience for his work. Dozens of his pieces are hanging in Highfalutin Coffee in the Avondale Point Business District and featured prominently on the TV show Mr. Mercedes, which is based on a series of Stephen King books and is filmed here in Charleston.

Showers was born in Goose Creek but spent much of his child hood in Hawaii, where he was exposed to more Asian-influenced pop culture, like Godzilla, Ultraman, and anime. This influence is clearly present in his work, which he sells at pop-up art shows and comic conventions around the southeast. “I also grew up with a love of street art, so I just wanted to blend those two things.”

While planning the show, Prickett and Showers sat down and talked about every painting, making thumbnails of each before putting brush to canvas. “We were very like-minded in everything. We really want to tap into that Saturday morning cartoon feel,” says Prickett. “I want people to walk in and  get that New Toy smell. I want people to feel that anyway.”

The paintings will vary in size and price. Since it’s a one-night only exhibit, Prickett says the pieces will be priced to sell. “We talked about it because we’re not selling any merch, we wanted to have a lot a smaller pieces so we can get these ideas out of our head and people can actually afford to take them home,” says Prickett. “So whatever happens in that night happens in that night.”

Because Prickett and Showers will be showcasing 20 new pieces each, the two artists have been frantically working leading up to the Feb. 20 show. Painting under pressure is nothing new for Prickett, who says while working on Mr. Mercedes, the demand and quick turnaround would have him sometimes delivering wet paintings to the set.

Showers on the other hand, admittedly doesn’t work as fast. But he’s accepted  the challenge and has been cranking out pieces for NeoPop as the day of the show rapidly approaches. “I’m a very energetic person. Last night I was up until 3 a.m. and then I played guitar for a while,” he says laughing. “I’m trying to make all new ones, 20-plus paintings.  Half of them are directly related to ’80s icons and then some are original characters.”

NeoPop, featuring new works by Patrick Prickett and T.M. Showers will be held on Thursday, Feb. 20, from 6-11 p.m. at The Schoolhouse, located at 720 Magnolia Road.