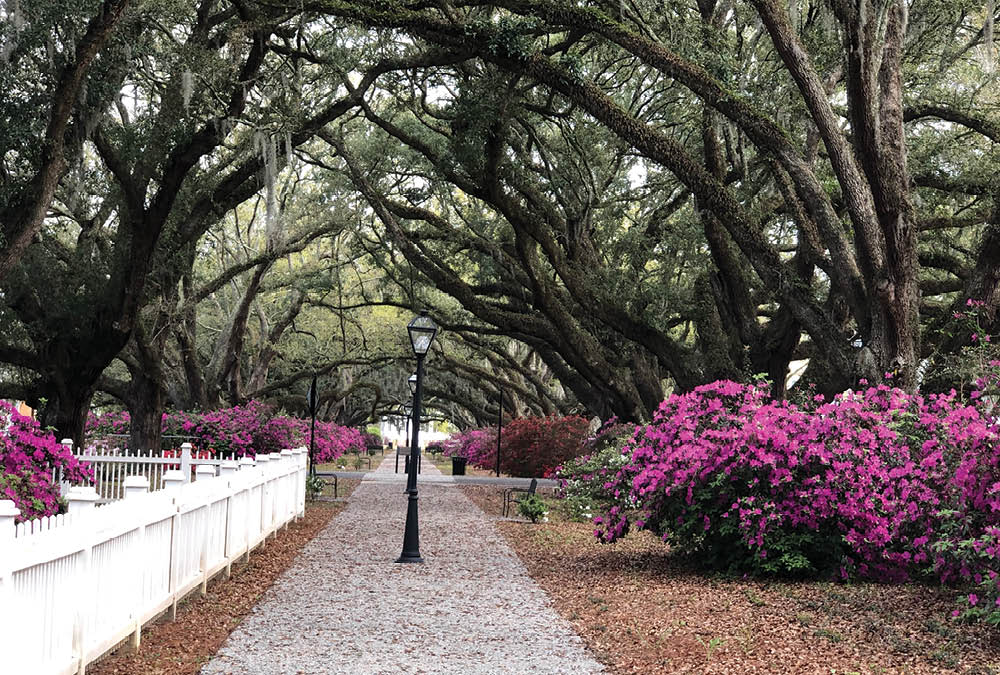 Upscale development has come to the Maryville-Ashleyville neighborhood, with the Avenue of Oaks, an ambitious housing development brought to market by locals at Crescent Homes.

Nearby, modest slab homes squat in the shadows of the three-story, 2,400-square-foot gleaming new construction, which looks like it’s been plucked from Daniel Island, with price tags ranging $500s to the $600s replete with views of the river and the marsh, and plenty of room beneath the living spaces for a large garage.

It is located so close to downtown, with a clean shot to Interstate 26 off Olde Towne Road.

It’s located along the banks of the Ashley River — water, in the Lowcountry — with a view of the Adventure, the 1600s, sailing ship replica anchored at nearby Charles Towne Landing State Historic Site.

And now, thanks to the explosion of shops and restaurants in Avondale, it’s located within a mile of parks and great retail and dining.

Preserved marshland, 100-year-old oaks aligned in a perfect ally leading up to the central Hillsborough House sales center. It’s zoned for one of the best schools for young families in the county, St. Andrews School of Math and Science Elementary.

It’s hard to describe its locale without it reading like a sales pamphlet. But it wasn’t always so rosy, so new in the Maryville-Ashleyville neighborhood.

In the late 1880s, on the heels of the beginnings of Jim Crow, a black woman named Mary Just made history by getting Maryville, which she named in honor of herself, chartered as the state’s first black town on the grounds of a former plantation.

Back then, there were no bridges to downtown. This was the sticks; no one cared how the land was to be used. That changed with progress and with regress. In 1926, the Ashley River Memorial Bridge, a drawbridge was built, connecting West Ashley to the peninsula.

Property to build a decent project is scarce. Across St. Andrews, a former public housing site has been razed and replaced with a skate park, dog park, soccer fields, and multi-unit apartment buildings. A city farmer’s market is held in the nearby park.

Land is now so scarce in West Ashley that around the corner in the Ashley Forest neighborhood, a church was demolished to make way for three homes in an already vibrant neighborhood in walking distance of the aforementioned Avondale success story.

And then, in 2016 the Campbell-Knuppel Mobile Home Park came up for sale when the Campbells who lived there wanted to move on.

In 2017, Crescent Homes, founded in 2009 amidst the Great Recession now with offices and projects in Charleston, Greenville and onto Nashville, bought the 10-acre site. Headquartered two miles away and with a front-row seat to the evolution of West Ashley, Avenue of Oaks was almost in their backyard. According to the company’s website, of the 40 homesites available at Avenue of the Oaks, 23 of them have already been sold, with only five available homes and 10 available homesites remaining. The remaining two sites are the current model home and the sales center.

There was no “a-ha moment,” says Crescent Homes president and fifth-generation homebuilder Ted Terry. There was finally a big enough piece of land available, combined with a tremendous setting, and good zoning already in place.

“And there was the incredible feature of a Boone Hall-esque ally of trees near the marsh and a five-minute drive to downtown,” he says.

His company had to have it. So, they bought it. And then they began squabbling with the city about the plan, but that was ironed out eventually.

Avenue of Oaks, and its 40 units is anchored by a line of old-growth Live Oak trees that has been preserved down its middle, with a new line of gas lamps running down a gravel path to a public dog park on Fifth and Maryville Avenue. All that’s left there is a permit to build a picnic shelter.

Affordable housing project sites in Maryville-Ashleyville have proven elusive, as Crescent Homes’ first two bids were rejected, and two more are under negotiation.

Maybe most importantly is what has not been erected: gates. This will not be a gated community plunked down in the middle of an historically black working-class neighborhood.

Yes, currently there are horse gates planted at the two entrances, but they will be gone as soon as the construction crews, trucks, and gear are gone.

“We planned on opening features to the community, and we are executing on that as well,” says Terry.

Jacob Lindsey, the city’s former director of panning, said that “Maryville-Ashleyville is incredibly important to the City of Charleston; it is worth preserving, which was called for in the city’s Master Plan and in all of our polices since then.”

Lindsey added that the homes going up, while not inexpensive, “they also aren’t luxury dwellings either, but are in the mid-range of houses in our region.”

But will that mean that Avenue of Oaks will be seamlessly knitted into the fabric, racial and historical and otherwise, of Maryville-Ashleyville?

Neighborhood association president Diane Hamilton sees the project as “really being isolated. I’ve not seen them interacting with the neighborhood, but that may change.”

Hamilton, whom Terry says has been “lovely” to work with, sees little equity between the price ranges of the existing homes and the new construction. She says the residents have been told by both the city and the county that their property taxes will be protected by surges caused by expensive executive homes springing up in their midst.

But, Hamilton says, should a current homeowner choose to sell, then the new owners will be saddled with an increased property tax.

Hamilton says she feels safe knowing that three different City Councilmembers represent pieces of the neighborhood and its environs, and all three are committed to protecting it and its history.

One of those councilmembers is Keith Waring, one of the spearheads of the affordable housing efforts within the city. He says the neighborhood has a history of protecting itself.

One of those factors protecting the neighborhood from gentrification over the years has been a very slow pace of turnover, says Waring, with families keeping the homes for multiple generations.

To him, Avenue of Oaks is as part of Maryville-Ashleyville as it is of the shopping district a mile away in Avondale. “That’s a heck of a mile; you’d need Kip Keino or Jim Ryun to run that mile,” says Waring, laughing.

He said if the city had in place “inclusionary” zoning measures, which would require developers to reserve some of their new nits for purchase by low- to moderate-income families, it would have helped the city and developer come together on a project that pleased both more quickly.

The area is in line for more improvements. Across the boulevard sits the former Food Lion shopping center owned by local Gramling Brothers. The plans there will be for the main building to be razed, and a new one constructed along the roadway, with a drive-thru for the CVS.

Parking will be hidden from sight behind the new main building, and more multi-level apartments will be erected around an improved soccer field and dog park. So, maybe an Olympic runner won’t be needed to cover the ground between Avenue of Oaks and nicer shops.

Time marches on, and apparently so does West Ashley.