Getting Down with the Low Tide Boyz 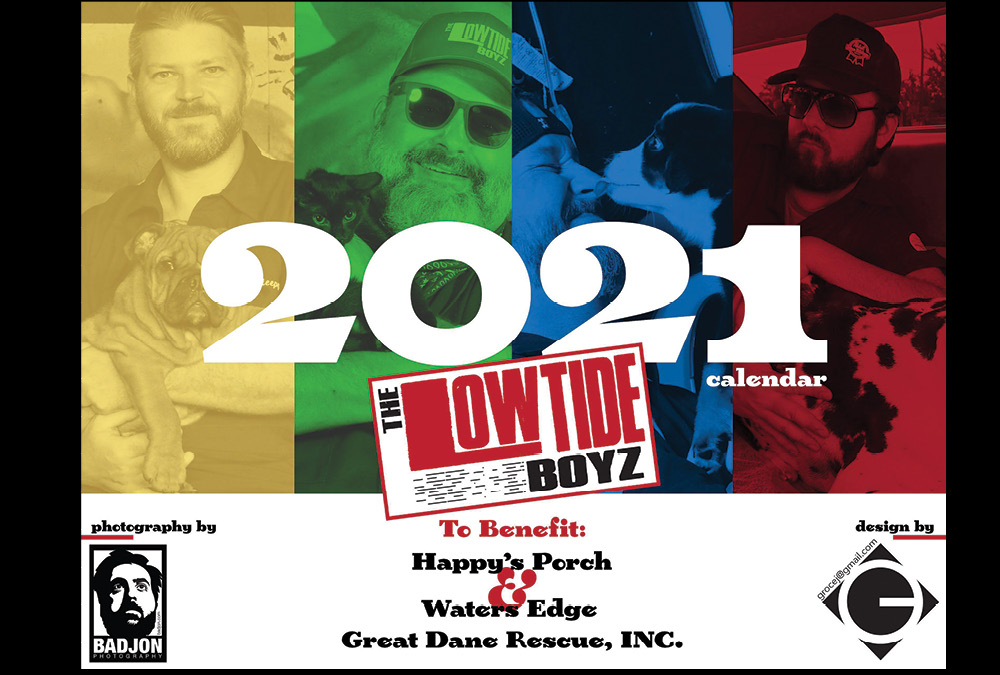 Every year the Charleston Firefighter calendar sets hearts ablaze across the Lowcountry. But this year our local hunky heroes have some competition. The Low Tide Boyz, Charleston’s only all-male charity dance team have a calendar of their own. And what it lacks in muscles it more than makes up with in heart and good humor. Proceeds from the calendar benefit Happy’s Porch and Waters Edge Great Dane Rescue, Inc.

The Low Tide Boyz is the brainchild of Art Perry, who teaches folks how to crab and fish as his day job with Casual Crabbing with Tia. It was just over a year ago when Perry got the idea for the charity dance team, which in non-COVID times performs at area parades and public events.

On Thanksgiving morning 2019, Perry and his wife Erin Tyler, who owns the Tin Roof in West Ashley, were cooking breakfast for her family and watching the Macy’s Thanksgiving Day Parade. The all men dance troupe the 610 Stompers out of New Orleans were performing in the parade and the newlyweds were mesmerized.

“Here were probably 25 guys dancing to KISS’s ‘I Love It Loud,’ having the best day ever,” recalls Perry. Married less than a month at the time, his new wife told him “There is no reason you should not start a group like this.”

“I laughed but the wheels had already started turning … I had been wanting to get more involved with giving back to the community in some form, and I love to dance!” says Perry, who then jumped on Facebook and made a post with the video of the 610 Stompers letting his friends and followers know he would be starting a charity-based dance troupe in Charleston for guys.

“I tagged as many guys on my friends list in the Charleston area that Facebook would allow and just said if you were interested, join this group,” he says. The Low Tide Boyz had their first official meeting at Tin Roof in January of this year and 18 people showed up.

“From there we spoke about what the goal for the group was, nicknames were issued, wardrobe decided … we nominated and voted on a Board of Directors and then I dropped a bombshell on them … We were already signed up to perform in the Park Circle St Patrick’s Day Parade,” says Perry. He says you could feel the air get sucked out of the room. But because of the pandemic, the event was cancelled.

Although their big debut was put on hold, the Low Tide Boyz still went to Park Circle and did kind of an impromptu pub crawl to help raise money. “We were going to The Sparrow regardless of the parade or not, then the Brew Cellar reached out, then Ship’s Wheel and before we knew it almost every bar/restaurant was requesting a stop,” recalls Perry.

“Since then, we have set up our 501(c) for non-profit status, have worked with several different local organizations AND were able to raise and donate over $1,000 in an afternoon by dancing in public, exactly what we set it up to do,” he says.

Now, the Low Tide Boyz boast 64 members, 23 who are the actual dancers. “Of those 23 probably three or four can actually dance, but man we make it look great,” says Perry. “It’s been amazing, because there are lots of fellas that want to help out and give back but have zero desire to dance, and they help out in different ways.”

According to Perry, there was always talk of doing a calendar at some point. But with the lack of events due to the pandemic, the calendar became a vital way for the group to raise money for their charities. Based on sales so far, Perry says it will most likely become a reoccurring fundraiser.

Low Tide Boyz Board Member “Good Time” Steve Waszkiewicz, took the lead on the calendar once it was decided that they wanted to do it and chose the charities they wanted to benefit.  “What goes better with adoptable pets than beefy hunks posed with them? That’s where we come in!,” says Perry. West Ashley photographer Jonathon Stout of BadJon Photography and Jason Groce Designs made us look amazing. Again, two members that aren’t dancers but without them, The Low Tide Boyz Official 2021 Calendar wouldn’t be nearly as hot as it is.”

In case you haven’t realized it yet, Perry and the Low Tide Boyz don’t take themselves too seriously. Just look at some of the photos and you’ll get the sense that these guys are just trying to have fun while helping out a good cause. The calendars have been a hit so far.

“If there was any doubt about whether or not The Official Low Tide Boyz 2021 Calendar, was going to be the hottest holiday gift of 2020, it was silenced as soon as we offered our pre-sale,” says Perry. “We sold out of the presale weeks before we released the calendars. The calendars are available at both Tin Roof in West Ashley and The Sparrow in Park Circle anytime they are open. They are only $25 and a major portion of sales goes to both Happy’s Porch and Waters Edge Great Dane Rescue, Inc.