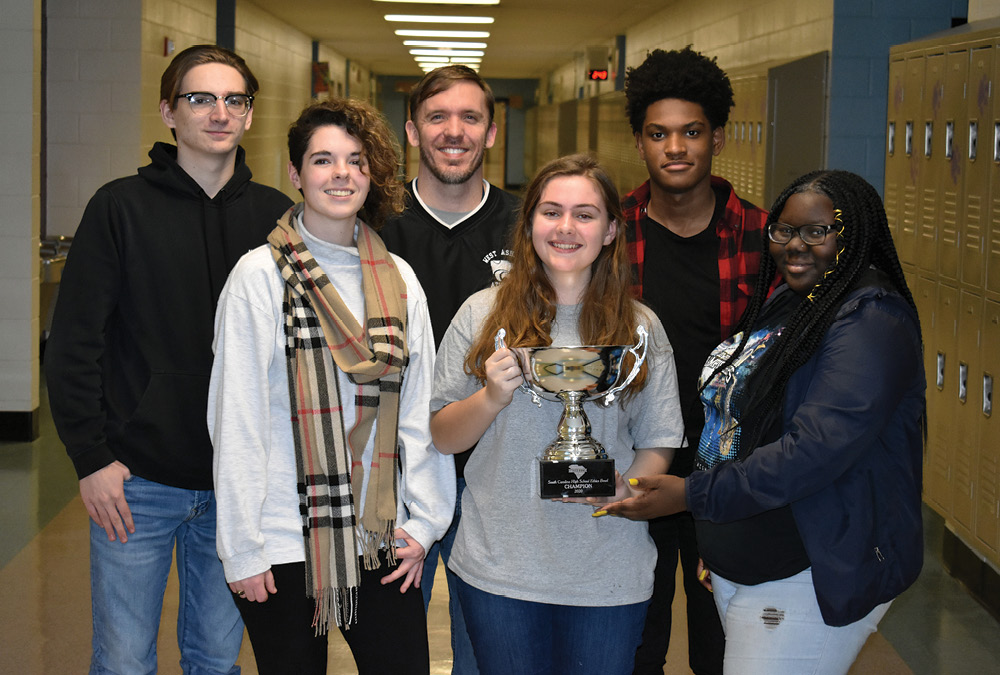 West Ashley High School competed in the South Carolina High School Ethics Bowl at Wofford recently and came in first place! They competed against 18 teams from 12 schools across the State including Chapman High, Spartanburg High, and Palmetto Scholars Academy; this was the second time West Ashley High participated in such a competition.

The team was started three years ago by Science teacher John Junge because of his love of the discussions and debates he liked to hold with his students. After several students inquired about starting a team, Junge realized there was a mutual interest and the Philosophy Club was born.

According to the University of North Carolina at Chapel Hill’s website, regional ethics bowls “are competitive yet collaborative events in which students discuss real-life ethical issues. This event teaches and promotes ethical awareness, critical thinking, civil discourse, civic engagement, and an appreciation for multiple points of view.”

A typical Ethics Bowl is an all-day competition consisting of a series of hour-long matches. The morning competition is a qualifying round where schools compete in three matches against randomly selected opponents. The top four teams then move on to the playoffs in a bracket-style tournament consisting of two semi-final matches followed by one final match.

Each year the High School Ethics Bowl releases a case set of 15 ethical scenarios such as student loan debt, confronting someone whose behavior is morally problematic, etc. for teams to study. West Ashley High’s team met once a week from September through January to be ready for competition. Teams are judged on the clarity of their presentations as well as the depth and breadth of their thinking on each case.

More than winning, being a part of a group like the Philosophy Club helps students expand their viewpoints and be willing to listen to differing opinions.

“I’ve learned how to see other people’s point of view rather than just my own opinion,” said junior Copeland Johnson, one of the students who helped start the team three years ago. One of our very few rules is seek first to understand. This is so we can hear the other viewpoints and ask questions to clarify meaning. Once we see the other side, we can criticize or introduce new points.”

An ethics bowl differs from a debate competition in one significant way – students are not given differing points of view they have to defend but rather speak up for whichever viewpoint they feel is correct. Showing they have thought through each case fully and logically while they interact respectfully with their opponents demonstrates a grasp of the material.

“Honestly, win or lose, the process is the most rewarding part,” said Junge. “When we first started in September the students didn’t really know one another very well. Having regular conversations about these complex issues, and learning how to disagree in respectful and constructive ways, is a very intimate act — you really learn a lot about someone’s character. So, I think what I’m most proud of is how well the students worked together and the rapport they built over the course of the year.”

The team competed against the winner of Georgia’s Ethics Bowl in a virtual playoff last week and lost in the final round. While disappointed they did not advance to Nationals, the team is already thinking about next year.

“We are currently looking to recruit members for a team for next year,” said Johnson. “We are going back to having Socrates Café which are open discussions about questions that we have so we can generate interest and find new members.”