Comeback Puppy of the Year 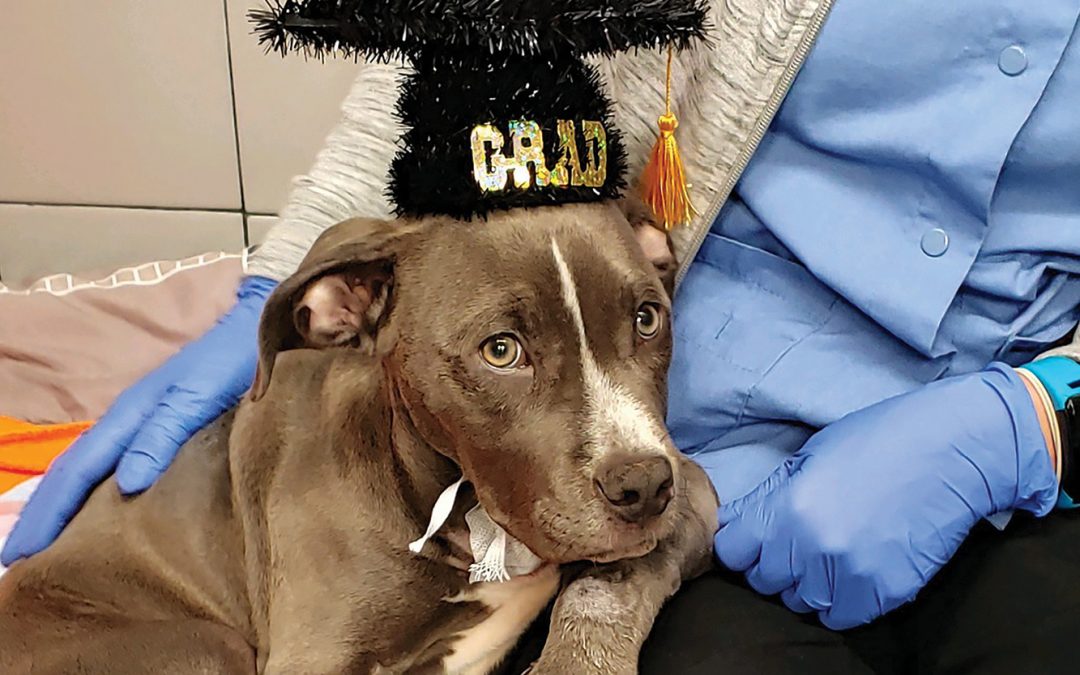 One evening back in mid-May, local residents Natalie Kaiser and Ryan Hart rushed their 13-week-old puppy Brees from Folly Beach’s West Ashley Avenue to the emergency vet in West Ashley. Brees had just been hit by a car and things weren’t looking good.

“I heard this massive scream and knew something was wrong,” recalls Kaiser. Her boyfriend Hart had just witnessed their brand new, sweet, goofy, playful Staffordshire Terrier puppy be struck by a small SUV with out-of-town plates. The driver did stop for a minute, but Brees stood right up and for a moment it seemed it was just a close call.

“Ryan picked him up and everything seemed OK until he started walking across the street with him and felt the blood dripping out of his mouth and he started having trouble breathing. Then we kind of went into life saving mode,” says Kaiser.

They quickly loaded his tiny, broken body into their car and headed to the Charleston Veterinary Referral Center (CVRC) on Shelby Ray Court. Brees had punctured his left lung, broken his left scapula, and the ball on his front left femur. His lungs were filling up with blood and although the drive from Folly Beach to West Ashley was less than 20-miles, it must have seemed like an eternity for the couple who just a over a month before welcomed a third dog into their home.

In addition to providing 24-hour emergency and critical care, CVRC also offers comprehensive specialty care and is the only Veterinary Emergency and Critical Care Society (VECCS) Level 1 Certified Veterinary Hospital in South Carolina. And although the outlook was bleak, Brees was in the best possible hands.

X-rays showed a mild pneumothorax (free air in the chest) and severe pulmonary contusions (bruised lungs). Despite supportive care with pain medicine, oxygen therapy, and chest tube placement (to address the pneumothorax), Brees continued to have significant difficulty breathing. Hart says he was told there was about a 10 percent chance of him surviving.

Due to concerns about Brees going into respiratory arrest, secondary to respiratory fatigue, mechanical ventilation was considered the only option. Brees was anesthetized, had a breathing tube inserted, and large volumes of bloody or blood-tinged fluid were suctioned from his airways. He was placed on a critical care ventilator and mechanically ventilated, this is the canine equivalent to “life support.” Arterial blood gas monitoring (assessing the levels of oxygen, carbon dioxide, pH, etc.) confirmed acute respiratory distress syndrome (ARDS).

ARDS is a potentially life-threatening condition where there are low oxygen blood levels in the body, inadequately supplying oxygen to organs and body systems. Brees required two blood transfusions due to blood loss (primarily into his lungs) and canine albumin (protein) transfusions.

While on the ventilator, Brees developed evidence of sepsis (low white blood cell count and low blood pressure), which was suspected to be related to ventilator-associated pneumonia, one of the most common complications of mechanical ventilation.

“We just kept getting bad news after bad news,” says Kaiser. “It was really the worst day ever.”

Never once during the whole process did Kaiser and Hart ever think about not doing whatever it took, financially and emotionally, to try and save Brees. The couple even refused to sign the Do Not Resuscitate (DNR) order when they admitted him.

“There was no way we were going to say goodbye without giving him a fighting chance,” recalls Hart.

Kaiser and Hart were unsure if their puppy would make it through the night. But he did. And the next day things slowly started to look a little better.

After four days of mechanical ventilation, Brees began to improve. A temporary tracheostomy (breathing hole in the neck) was placed to enable weaning from sedatives, and allow him to attempt to breathe on his own. Mechanical ventilation was discontinued and Brees’s breathing tube was removed on day five.

As he remained very weak, CVRC doctors began treating him with physical therapy and acupuncture. He continued to improve and oxygen therapy was discontinued on the seventh day.

Brees began eating, drinking, and walking on his own despite an injured hip and shoulder blade. Those were issues that would have to be addressed at a later date, once he was more stable.

On day eight, Brees was discharged and Kaiser and Hart took him home. His recovery was far from over, but the couple was excited to have their little guy back.

In an blog post on the CVRC’s website, they wrote: “As a result of the quick action taken by his family to get him to our hospital, along with our comprehensive emergency and specialty care, highly trained medical team, and advanced technologies — not to mention Brees’ strong will and fighting spirit — he is alive today as an example of what is possible when love, medicine, and an incredibly dedicated team and pet owner come together.”

Since the life-saving efforts of CVRC, Brees has undergone surgery for his leg injury. The ball atop his femur was removed, but the scrappy little puppy doesn’t seem to even miss it.

Keiser and Hart named the dog after the Saint’s under-sized but scrappy Super Bowl-winning quarterback, who in 2004 suffered a devastating shoulder injury while playing for the San Diego Chargers. Brees, the quarterback, dislocated his shoulder and tore the labrum and rotator cuff on his throwing arm. Many thought his career was over. The Chargers released him and nine months later Brees signed with the New Orleans Saints and the rest is Big Easy legend. The next year he won the NFL’s Comeback Player of the Year. Four years later he was the Offensive Player of the Year and MVP of Super Bowl XLIV. At 40 years old, Brees is still one of the elite quarterbacks in the league and the NFL’s all-time passing leader.

Brees the Puppy seems to be on a similar path as his namesake. He certainly has earned Comeback Puppy of the Year in West Ashley.