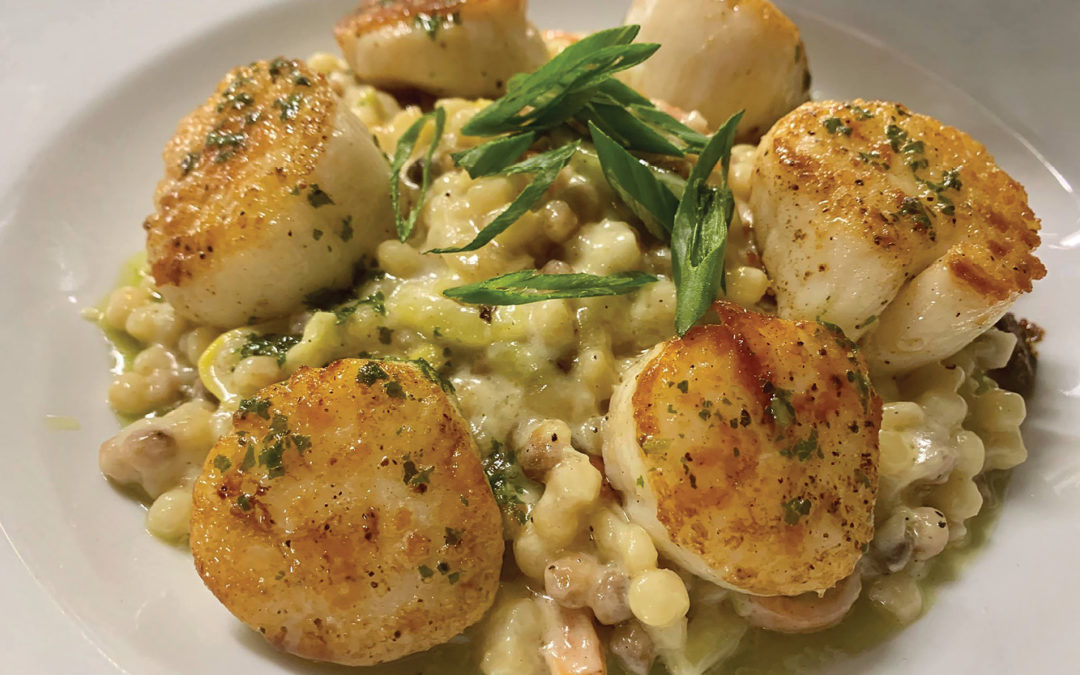 For more than a year, the space that formerly housed Fork Café on Ashley River Road sat empty. However, the shopping center around it was booming. A popular local pizzeria opened, then a Japanese take-out spot, now a French bakery and cheese shop is right next door. Besides food, the shopping center located at 2408 Ashley River Road, is also home to a cute retail boutique, an upscale liquor store, a high-end bike shop, an art studio, among several other vibrant businesses. Yet, the central dining spot in the middle of the shopping center sat empty ever since Fork closed its doors in 2017 and remained so until last month, when without a lot of hoopla, experienced restaurateur Kris Kincaid quietly opened Betty Lou’s Bistro along with partners Zack Willard and Joe Leonard.

In a part of town starved for a finer dining option, it didn’t take long for word to spread. Betty Lou’s was welcomed with opened arms by the local community who packed in opening weekend and for Valentine’s Day. After just a couple weeks since opening their doors, Betty Lou’s is already a favorite spot among those living beyond the Sam Rittenberg corridor.

“Most people that I’ve talked to since opening, about 90 percent, the first thing they say is ‘we’re so glad you’re here’ and then ‘West Ashley needed something like this,’” says Kincaid, who has been in the industry for more than two decades and run his own restaurants for the last 17 years. Before opening Betty Lou’s, Kincaid owned Anna Bell’s in North Charleston and Locklear’s Beach City Grill on the Folly Beach Pier. After selling Anna Bell’s and then losing the lease on the pier spot in late 2016, Kincaid considered getting out of the restaurant business.

“When I lost that lease on Locklear’s I wasn’t going to open another restaurant,” says Kincaid, who is also partners in two other West Ashley businesses, Avondale Wine & Cheese and Cannon Distillery. “But the crazy/stupid part in me made me do it again. But I know how to do and, honestly, I love it.”

Around the same time he bought Fork, Kincaid also had signed a lease on a restaurant right on Little Oak Creek on the way out to Folly. Issues with the pilings at the waterfront restaurant delayed that opening and so Kincaid says he considered trying some different ideas with the Fork space.

“I toyed around with the idea of doing a test kitchen, where a chef could try out a concept here before opening their own place. I also considered doing a pop-up kitchen, where different chefs would come in,” says Kincaid, who even listed the restaurant for sale before deciding to go back to the tried-and-true formula that’s worked at all his other restaurants. LoLo’s (Locklear’s on Little Oak) is now open in addition to Betty Lou’s.

Kincaid’s partnered with two local chefs, Willard and Leonard. “I was introduced to them and immediately liked the guys,” recalls Kincaid. “They kind of had the same philosophies as I do about restaurants — use fresh ingredients, local when possible, and treat customers with respect.” Kincaid wanted to offer them freedom with helping create the menu and restaurant but says there was one thing that was non-negotiable and that was the name. Betty Lou’s Bistro is named after his grandmother on his mother’s side. His first restaurant Anna Bell’s was a tribute to his randmother on his father’s side.

Willard and Leonard helped Kincaid craft a dinner menu that incorporated several of the favorites from his other restaurants, such as Shrimp and Grits ($18) and Fried Seafood Platters ($12-18), while adding some more upscale “bistro” options, such as Pork Chop Milanese with butter bean risotto ($17), Bouillabaisse ($26), Petit Filet with potato cake and charred Brussels sprouts, ($24), Pecan-encrusted Chicken with braised greens and sweet potato mash ($15), Crab-Stuffed Flounder with succotash ($25)

“The idea is that the menu will change every quarter, offering a different seasonal menu,” says Kincaid, who adds that they also will offer select nightly specials. “We might have like one or two specials a night, but it’s not just to burn through leftover product, we’d rather our specials be something good.” So far specials have included: Pan-Roasted Duck with a Grand Marinier demi-glaze served with truffle vegetable risotto; Pan-Seared Scallops served over fresh lobster ravioli, topped with a lobster cream sauce, and paired with fresh grilled asparagus; and Pan-Seared Mahi-Mahi over vegetable fricasse with cherry tomatoes, potatoes, asparagus, and klamata olives.

From the Starters menu, Kincaid says some of the more popular items have been the rotating daily Perogies ($10), which come from West Ashley pasta-maker Rio Bertolini’s. Pomme Frites ($7) are also popular along with the Fried Green Tomatoes ($7).

Betty’s Lou’s Bistro is also open for brunch every Sunday, starting at 9 a.m. Kincaid says they have been on a wait every Sunday since they opened. Brunch favorites include the Chicken and Waffles ($13), Steak Benedict ($14), Crab Cake Benedict ($15), and She Crab Omelet ($15).

In addition to the food, Betty Lou’s has a respectable and ever-growing selection of bourbons as well as other spirits, like Kincaid’s own Cannon Distillery Vodka. In addition to being one of the owners of the distillery, his partnership of a wine shop and bar has helped Kincaid gain an appreciate for good wine.

“Knowing what the wine really costs and seeing what it’s sold for at some restaurants kind of offends me,” says Kincaid, who makes a point in offering good wine at a fair price at Betty Lou’s. “It enhances the food so much. It makes things taste better and it makes it a better experience,” says Kincaid. “So my thought on that is I’d rather someone come in and enjoy a nice bottle of wine with their meal and then go tell their friends about it.”