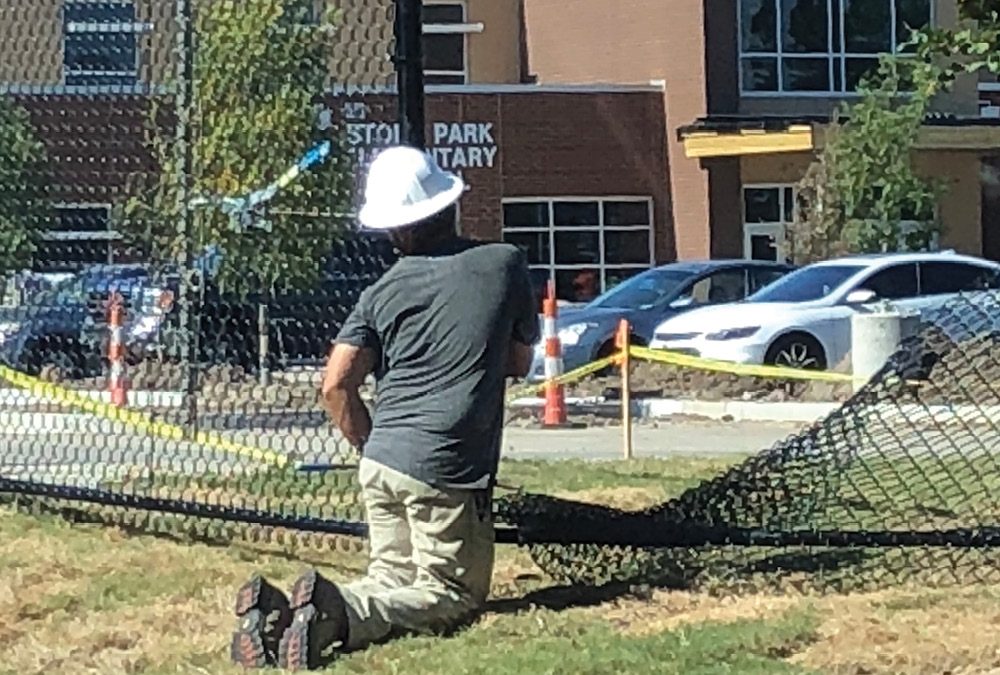 There were more subcontractors doing finishing work at the new Stono Park Elementary at the end of last month than you could shake a stick at. And they were all busting their humps, backs arched laying down sod, playground equipment, bus turnaround asphalt, fencing … you name it.

Reggie McNeil is the executive director of capital programs for the Charleston County School District, and is in charge of making sure it opens in time for the first day of school this year.

“Heck, yes, it’s going to be ready,” says McNeil, who insists nothing will be left unfinished this month for the kiddies and teachers to return to. For the past few years, the school has been housed in a swing space in the former St. Andrews High facility.

The new school will be significantly larger than its razed 65-year-old predecessor, with 75,000 square feet of space, and as many as 30 general classrooms. More importantly, the floors won’t sag, the bathrooms won’t smell, and light will fill the building.

It will welcome upward of 500 students, 200 more than came here three years ago, due to a redrawn enrollment zone that borrowed kids from neighborhoods formerly assigned to other schools. It’s a weirdly-shaped zone where it’s outline on a map resembles a profile silhouette of Fred Flintstone with a thought bubble next to it.

Redrawing the lines brought up its own brouhaha, with majority white neighbors initially complaining that they were being dinged and having their kids sent to that largely poor minority school. Those lines were redrawn, and everyone seems happier.

But be clear: this is a school that wasn’t going to be.

In 2010, county residents approved an additional half-cent local sales tax to raise funds to build many projects in the area, from schools to greenspace to infrastructure. Originally, a new Stono Park was included to be rebuilt.

But with costs mounting at other school projects, and shifting priorities on the School Board, the district attempted to morph Stono Park from a rebuild into a renovation project.

The budget was downgrade from over $20 million to just under $10 million.

That didn’t sit well with the West Ashley community, which had seen pricy elementaries built for richer, smaller neighborhoods East of the Cooper River. A public outcry changed minds back at the district, and $27.3 million was spent to replace the school, with just over $18 million going for construction costs.

The rest of the money went to tear down the old school, the easy part, and improve the 5-acre site, which now includes a covered bus turnaround, a retention pond to keep the area surrounding the school dry, and an impressive terrazzo floor in the main entrance that will feature the school mascot, a dolphin.

Michael Miller, currently the Register of Deeds for the city who was the School Board member representing West Ashley and the hinterlands, was an early protector of the project at the time.

Miller says he is “extremely happy CCSD was able to fulfill its promise to its students by following through on the referendum for a new school.”

Miller goes on to add that building the school was the “easy part,” and that making sure the district “gets all of the school’s needs, academically and educationally, fulfilled” is his next concern.